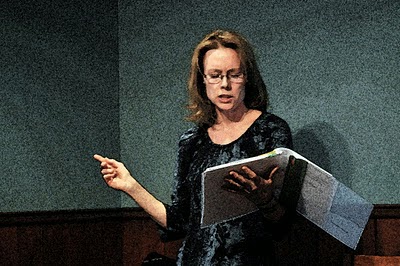 Nin Andrews was called “the Wonder Woman of poetry” by Entertainment Weekly in 2010, and the description couldn’t be more accurate. Here poems draw you in, make you tell the truth, to yourself, in both laughter and deep reflection. . Her most recent book, Southern Comfort (CavanKerry Press) was well received by critics and audiences. Entertainment Weekly says of Andrews, “She’s a sly sophisticate, a raucous verse-maker, a mischievous observer with a long memory.” Publishers Weekly observes, “her art lies in her ability to transport readers to a place where it’s possible to savor the waning of childhood innocence.” Andrews has authored 7 books of poetry, and is the recipient of the 2 Ohio Arts Council grants. She has her BA from Hamilton College and her MFA from Vermont College. We were honored by her interview.

EWR: Can you talk a little about what you are doing now?

Andrews: I just finished Why God Is a Woman, which is forthcoming from BOA in early 2015. The book is a series of linked prose poems about an imaginary island where the genders have reversed roles, and women rule.  The men are the beautiful sex, forever going the beauty salons and worrying about their hair, their weight, their hairiness.  They quit work as soon as they are married.  After all, men are designed for domesticity so what else would they want to do with their lives?

But it’s not just a book about gender roles. It’s about a unique society, complete with its own culture, problems, and myths.  It was so much fun to write. You can hear a sample here:

EWR: You have said before that it is the process and act of creating that you truly love about poetry.  Can you say what it is about the process that motivates you to go forward and create more?  Is it a feeling?

Andrews: When I am not writing, I feel like a plant with sunlight.  A sky without color.  A dog without a tail to wag—not that there aren’t tail-less dogs, but you get my drift. I suppose you could say I am addicted to writing.  Without my poetry fix, I go into withdrawal. But you asked what is it about the act of creating that I love, and the answer is that I love the feeling of watching ideas race through my mind in pictures, words, moods, dreamscapes, and colors.

There is a downside to every addiction, and one of the downsides to this one is that I don’t care for my work as much when it’s finished.  So I’m not much good at self-promotion.  I’m much more interested in the next poem, series of poems, or book.

EWR: What do you hope your poetry does in the world?

Andrews: When I was a girl, my mother would read poetry aloud to me. I absolutely hated it.  Poetry was like bees in my brain, buzzing and stinging.  But after a while, the poems began to speak to me.  Some took me into other realms—poems like “The Ancient Mariner” or “Annabel Lee.”   They were magic.  Pure magic.  Like swimming in a cool lake at night.

I think that’s what  art can do for you.  A dance, a song, a poem, a painting—it can transport you, if only for a moment, to unexpected destinations.  That’s what I want from poetry, mine and others.

EWR: Are you obsessed with anything in your poetry today?

Andrews: I’m always obsessed with something.  For a few years I was obsessing on gender issues, which resulted in Why God Is a Woman.  Now I have been thinking about racism, and I am working on a collection of poems based on my southern childhood that focus on race. I’m also obsessing on all the poets who have influenced me, all the poets I have fallen in love with.  I’m working on a collection called The Last Orgasm to honor my poet-gods.

There are a few pieces from that collection here:

EWR: You do poetry readings.  I was wondering if you like them.  Do you enjoy bringing your work to an audience in this way?

Andrews: I do and I don’t.   I love bringing the poems to life, talking to audiences, and trying to entertain. I also love other poets, and having a chance to meet and talk to them about their process. But I am an introvert, so I find them exhausting.

EWR: Do you draw the cartoons on your site?

Andrews: Yes, I draw them with Flash, an Adobe drawing program.  I use my mouse as if it were a paintbrush or pencil.

EWR: What image, in any of your poems, do you love?

Andrews: Wow, that’s a tough question.  The first thought that comes to my mind—and I don’t know if I love it—but it’s the image of being eaten by a tiger from the poem, “The Cat,” which is in my collection, Sleeping with Houdini.  It’s about a childhood nightmare I used to have. The feeling from that dream is something I still experience when I feel uneasy—like something is clawing my insides.  It’s hard to explain, so here’s an excerpt:

“That night I dreamt I was eaten by a tiger.  How did he eat you? a therapist asked years later.  Slowly.  That’s how.  He kept me alive night after night, licking the salt form my fingers and tears and the nape of my neck until he become my mind.  He became my fears and the song of my thoughts like the soft padding of slippered feet as I walked the hallways on sleepless nights.  He became the absence inside me long after he left, a faint sensation, like tiny claws just beginning to sink into my gut and groin.  It’s that feeling I came to define as being alive.”

Andrews: These feel like several questions.  First, I would say that writing about being a woman really did help me connect to being a woman.  It made me think about all of the issues I have with my gender, both personally and culturally.  Second, I don’t know if being a woman helps me connect to my poetry.   But third, I do connect to myself  by writing poetry.  Poetry is a way of listening to my mind and heart, and also of listening to the mind and heart of others.  I think it’s a way of dialing in, connecting deeply, and being present.

EWR: You talk about silence in your poetry.  Do you feel being quiet or being still is good for poetry?

Andrews: I love to be completely alone and still for hours at a time. Then I can listen closely. I write best in silence.

EWR: You have said in other interviews that you write in more than one style at a time.  Can you talk about that process a little?

Andrews: Yes, I always like to have a few projects going on.  I work on one for a while, and then I switch to another.  I do this because I can overwork a poem or a series of poems and totally destroy the quality of the work.  I have an over-zealous critic in my brain.  I might rewrite a poem fifty times.  I start spinning my wheels. Then I make myself switch to another poem or project.  That way I can return to the work later with fresh eyes.

EWR: Do you have anything you would like to add or anything upcoming?

Andrews: I would say that someone might think, after reading my answers, that I write my poetry alone, which I do of course.  But I keep a community of poets in my mind and on my shelf.  I feel as if I am in an ongoing dialog with others.  If there weren’t amazing poets out there writing and inspiring me, poets like Denise Duhamel, Rick Bursky, Shivani Mehta, David Lehman, Kathleen McGookey, Carol Maldow, Tim Seibles, Claire Bateman, and so many others, I don’t know if I’d be writing as happily.  I love to open my email and find a new book from a friend.  I love the feeling of knowing there are others—I mean there are so many other amazing and beautiful poets—by beautiful I mean, spiritually beautiful—slaving away on each word, each line, each page, creating insightful, moving, even transcendent poems.  It’s as if there is an entire symphony out there, and I love being a small part of it. #