You are here: Home / Classic Articles on Writing / Mark Twain is a Slob by Willa Cather 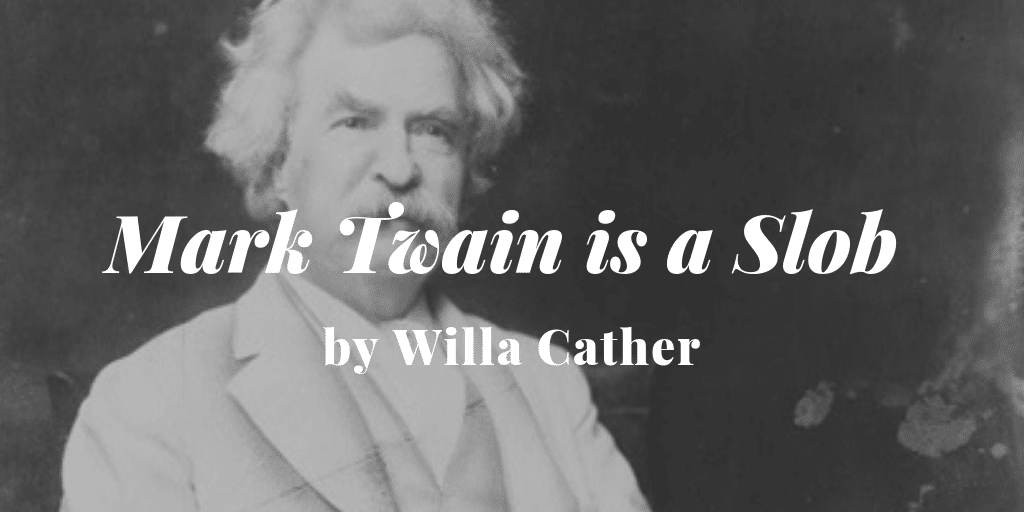 If there is anything which should make an American sick and disgusted at the literary taste of his country, and almost swerve his allegiance to his flag it is that controversy between Mark Twain and Max O’Rell, in which the Frenchman proves himself a wit and a gentleman and the American shows himself little short of a clown and an all around tough. The squabble arose apropos of Paul Bourget’s new book on America, “Outre Mer,” a book which deals more fairly and generously with this country than any book yet written in a foreign tongue. Mr. Clemens did not like the book, and like all men of his class, and limited mentality, he cannot criticise without becoming personal and insulting. He cannot be scathing without being a blackguard. He tried to demolish a serious and well considered work by publishing a scurrilous, slangy and loosely written article about it. In this article Mr. Clemens proves very little against Mr. Bourget and a very great deal against himself. He demonstrates clearly that he is neither a scholar, a reader or a man of letters and very little of a gentleman. His ignorance of French literature is something appalling. Why, in these days it is as necessary for a literary man to have a wide knowledge of the French masterpieces as it is for him to have read Shakespeare or the Bible. What man who pretends to be an author can afford to neglect those models of style and composition. George Meredith, Thomas Hardy and Henry James excepted, the great living novelists are Frenchmen.

Mr. Clemens asks what the French sensualists can possibly teach the great American people about novel writing or morality? Well, it would not seriously hurt the art of the classic author of “Puddin’ Head Wilson” to study Daudet, De Maupassant, Hugo and George Sand, whatever it might do to his morals. Mark Twain is a humorist of a kind. His humor is always rather broad, so broad that the polite world can justly call it coarse. He is not a reader nor a thinker nor a man who loves art of any kind. He is a clever Yankee who has made a “good thing” out of writing. He has been published in the  North American Review and in the Century, but he is not and never will be a part of literature. The association and companionship of cultured men has given Mark Twain a sort of professional veneer, but it could not give him fine instincts or nice discriminations or elevated tastes. His works are pure and suitable for children, just as the work of most shallow and mediocre fellows. House dogs and donkeys make the most harmless and chaste companions for young innocence in the world. Mark Twain’s humor is of the kind that teamsters use in bantering with each other, and his laugh is the gruff “haw-haw” of the backwoodsman. He is still the rough, awkward, good-natured boy who swore at the deck hands on the river steamer and chewed uncured tobacco when he was three years old. Thoroughly likeable as a good fellow, but impossible as a man of letters. It is an unfortunate feature of American literature that a hostler with some natural cleverness and a great deal of assertion receives the same recognition as a standard American author that a man like Lowell does. The French academy is a good thing after all. It at least divides the sheep from the goats and gives a sheep the consolation of knowing that he is a sheep.

It is rather a pity that Paul Bourget should have written “Outre Mer,” thoroughly creditable book though it is. Mr. Bourget is a novelist, and he should not content himself with being an essayist, there are far too many of them in the world already. He can develop strong characters, invent strong situations, he can write the truth and he should not drift into penning opinions and platitudes. When God has made a man a creator, it is a great mistake for him to turn critic. It is rather an insult to God and certainly a very great wrong to man.