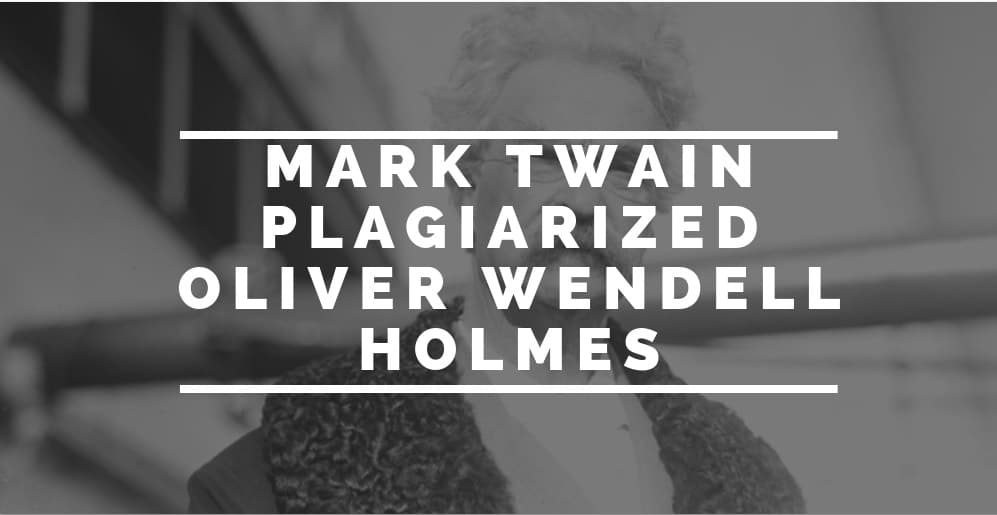 The truth here is that Mark Twain Plagiarized Oliver Wendell Holmes. Once again we have found a quip from Twain that we feel needs to be highlighted in the pages of history. Twain is one of our favorite writers, especially when it comes to writing about writing. If he did everything he says he wanted to do in those times, most writers, peers of Twain’s, would be dead. Twain would have killed them out of jealousy, rage, or just for the humor of it. We know the hearts of many writers, and Twain had one.

This is a speech he gave at the 70th Birthday part of Oliver Wendell Holmes. The original title of the speech (if there was one) was Unconscious Plagiarism. It was giving on August 29, 1879. The speech is now, of course, in the public domain. We think that everyone should read more Twain of course, and pieces like this are why. Please post your favorite Twain essay or “writing about writing” or “writing about life” piece in the comments.

I would have traveled a much greater distance than I have come to witness the paying of honors to Doctor Holmes; for my feeling toward him has always been one of peculiar warmth. When one receives a letter from a great man for the first time in his life, it is a large event to him, as all of you know by your own experience. You never can receive letters enough from famous men afterward to obliterate that one, or dim the memory of the pleasant surprise it was, and the gratification it gave you. Lapse of time cannot make it commonplace or cheap.

Well, the first great man who ever wrote me a letter was our guest—Oliver Wendell Holmes. He was also the first great literary man I ever stole anything from—and that is how I came to write to him and he to me. When my first book was new, a friend of mine said to me, “The dedication is very neat.” Yes, I said, I thought it was. My friend said, “I always admired it, even before I saw it in The Innocents Abroad.” I naturally said: “What do you mean? Where did you ever see it before?” “Well, I saw it first some years ago as Doctor Holmes’s dedication to his Songs in Many Keys.” Of course, my first impulse was to prepare this man’s remains for burial, but upon reflection I said I would reprieve him for a moment or two and give him a chance to prove his assertion if he could: We stepped into a book-store, and he did prove it. I had really stolen that dedication, almost word for word. I could not imagine how this curious thing had happened; for I knew one thing—that a certain amount of pride always goes along with a teaspoonful of brains, and that this pride protects a man from deliberately stealing other people’s ideas. That is what a teaspoonful of brains will do for a man—and admirers had often told me I had nearly a basketful—though they were rather reserved as to the size of the basket.

However, I thought the thing out, and solved the mystery. Two years before, I had been laid up a couple of weeks in the Sandwich Islands, and had read and re-read Doctor Holmes’s poems till my mental reservoir was filled up with them to the brim. The dedication lay on the top, and handy, so, by-and-by, I unconsciously stole it. Perhaps I unconsciously stole the rest of the volume, too, for many people have told me that my book was pretty poetical, in one way or another. Well, of course, I wrote Doctor Holmes and told him I hadn’t meant to steal, and he wrote back and said in the kindest way that it was all right and no harm done; and added that he believed we all unconsciously worked over ideas gathered in reading and hearing, imagining they were original with ourselves. He stated a truth, and did it in such a pleasant way, and salved over my sore spot so gently and so healingly, that I was rather glad I had committed the crime for the sake of the letter. I afterward called on him and told him to make perfectly free with any ideas of mine that struck him as being good protoplasm for poetry. He could see by that that there wasn’t anything mean about me; so we got along right from the start. I have not met Doctor Holmes many times since; and lately he said—However, I am wandering wildly away from the one thing which I got on my feet to do; that is, to make my compliments to you, my fellow-teachers of the great public, and likewise to say that I am right glad to see that Doctor Holmes is still in his prime and full of generous life; and as age is not determined by years, but by trouble and infirmities of mind and body, I hope it may be a very long time yet before any one can truthfully say, “He is growing old.”