You are here: Home / Classic Articles on Writing / MY PASSION FOR FERRIES by Walt Whitman 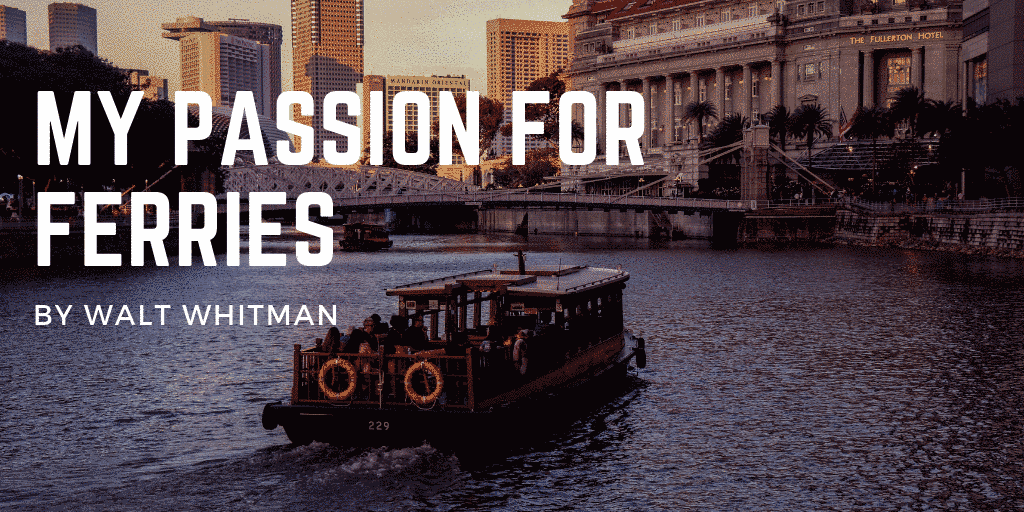 This is a wonderfully short piece written by Walt Whitman. Honestly the more you know about Whitman the more interesting this subject becomes. The essay was written in 1892.

Living in Brooklyn or New York city from this time forward, my life, then, and still more the following years, was curiously identified with Fulton ferry, already becoming the greatest of its sort in the world for general importance, volume, variety, rapidity, and picturesqueness. Almost daily, later, (’50 to ’60,) I cross’d on the boats, often up in the pilot-houses where I could get a full sweep, absorbing shows, accompaniments, surroundings. What oceanic currents, eddies, underneath—the great tides of humanity also, with ever-shifting movements. Indeed, I have always had a passion for ferries; to me they afford inimitable, streaming, never-failing, living poems. The river and bay scenery, all about New York island, any time of a fine day—the hurrying, splashing sea-tides—the changing panorama of steamers, all sizes, often a string of big ones outward bound to distant ports—the myriads of white-sail’d schooners, sloops, skiffs, and the marvellously beautiful yachts—the majestic sound boats as they rounded the Battery and came along towards 5, afternoon, eastward bound—the prospect off towards Staten Island, or down the Narrows, or the other way up the Hudson—what refreshment of spirit such sights and experiences gave me years ago (and many a time since.) My old pilot friends, the Balsirs, Johnny Cole, Ira Smith, William White, and my young ferry friend, Tom Gere—how well I remember them all.