You are here: Home / Horror Contest 2016 / House of Sleep by Tyler Johnson 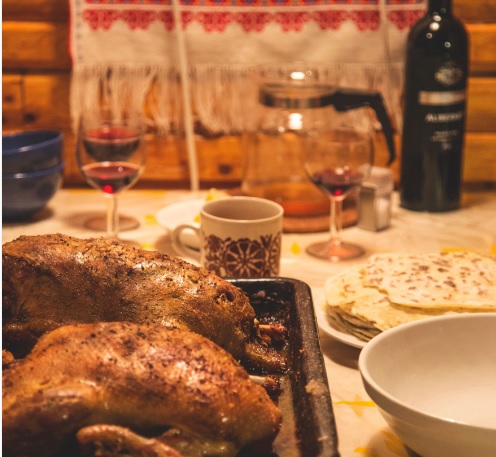 It was six days before Thanksgiving when Jamie’s mother died, and he spent the holiday watching the Packers trounce the Lions in his grandfather’s beer-smelling easy chair. It was rusted into the recline position, so he ate Spaghetti-Os with a folded-in-half bed pillow tucked under his head.

His grandparents spent the day the same way they’d spent most of the last week – sound asleep in adjacent rooms.

To Jamie’s astonishment they weren’t simply bed stricken by grief, or lying on their backs, drowning their grief in booze or smothering it with shitty food.

They were really asleep.

Jamie had already tested the theory three times by slipping into his grandmother’s room to pilfer the $180 in her purse in increments of increasing size. Next time he’d take her card and hope that the PIN was his mother’s birthday or something else that could be easily guessed. If nothing else, he’d be able to order food over the phone or from that pizza place that offered online ordering. The delivery guy would surely remember Jamie from when his mother had been alive. They’d ordered out a lot.

He went to school the Monday after the holiday, and the day after that. On Wednesday he shut off his alarm and laid back down, and no one woke him. He had turned 16 in September, which was old enough that no one would come looking for him.

His mother had left him a few hundred dollars and the house was on the market. He told himself that when the weather started to warm up, he’d look for a job.

The days passed in silence. At night, Jamie would put on a ratty bathrobe and take his place in the inert recliner his grandfather had once loved.

It was there that he would watch TV until sunrise, dozing occasionally and dreaming of the silhouetted figure he recognized instantly as Nick.

He’d wake to the flush of a toilet or the creak of a floorboard. Most days around noon, his grandmother would trundle into the kitchen and heat up a bowl of soup. Whether it was for her or his grandfather, Jamie never knew.

The winter was one of the harshest in recent memory, and any doubts Jamie had about his decision to stop attending school (He never thought of himself as a dropout, though he was exactly that in every sense of the word.) were buried under the three feet of snow that fell in the first 48 hours of the new year.

By now, the few people who might’ve called themselves Jamie’s friends had stopped sending their obligatory concerned texts. He’d rarely responded, as he didn’t know what to say anymore than they did. None of them knew his mother, and he knew little about her in those final years himself.

She spent half her time in the state hospital, the other half gone on vodka and pills -some recreational, some prescribed – only leaving the house when she got picked up by Nick, who never came to the door, but just leaned on the horn of his long black Cadillac.

Even though he never saw the man, or perhaps for that very reason, Nick was a common figure in Jamie’s dreams.

They weren’t always nightmares, sometimes Jamie woke feeling that he’d been bargaining with Nick, never getting what he wanted. Other times he sat bolt upright, trying to shake the feeling that a hulking, silhouetted figure had pinned him to the ground.

He never saw a face, but always awoke with the certain knowledge that it was Nick and the vague fear that the man burrowed a little deeper into Jamie’s soul.

As the storm raged on, Jamie’s food supply wore thin, and it became increasingly difficult to find pizza or Chinese places that would deliver.

He tried to wake his grandmother one afternoon to ask where she kept the car keys, but she blindly swatted at him and rolled over to face the wall.

Jamie sat in his grandfather’s frayed recliner, fishing Vienna sausages out of a rusty tin he’d found in the back of the pantry.

For the first time he began to panic.

He experienced flashes of desperation like his mother must’ve felt those times when she would’ve done anything to score.

One night, the doorbell rang, and for reasons he would never understand, Jamie knew exactly who had come calling.

“Hello, Jamie,” Nick said, looking just as he had in Jamie’s dreams – gaunt, stoop-shouldered, yet somehow imposing.
Jamie didn’t remember inviting him in. Interacting with Nick was like watching a film with missing frames or trying to piece together a half-remembered nightmare.

“It’s not their fault, Jaime,” Nick told him, now fully at home in his grandfather’s chair. “Your mother owed me a lot. More than those two old folks can give.”

Jamie couldn’t speak, and it seemed he didn’t need to.

Nick anticipated his every question. It seemed he’d done this many, many times before.

“Some people can’t make themselves happy, Jamie. They need help. And there’s nothing they won’t give for it.”

“It’s not your grandparents’ fault that there’s not much of them left. They did everything they could to save their daughters’ life. Well, almost everything.”

It was then that Jaime was overcome with a flood of understanding.

He knew why his mother was so drawn to Nick; he knew what happened to his grandparents; and he knew there was no point in running.

The house, always quiet, was now as silent as a tomb.

He almost felt almost relieved by the knowledge that there was nothing he could do. He’d come into the world with a debt he could never repay.

The understanding brought a new confusion, and his head was flooded with questions he couldn’t articulate.

“That’s a question for your mother,” Nick said as he rose from his chair.