You are here: Home / Resources for Writers / Top 10 Types of Poems, Forms or Formats 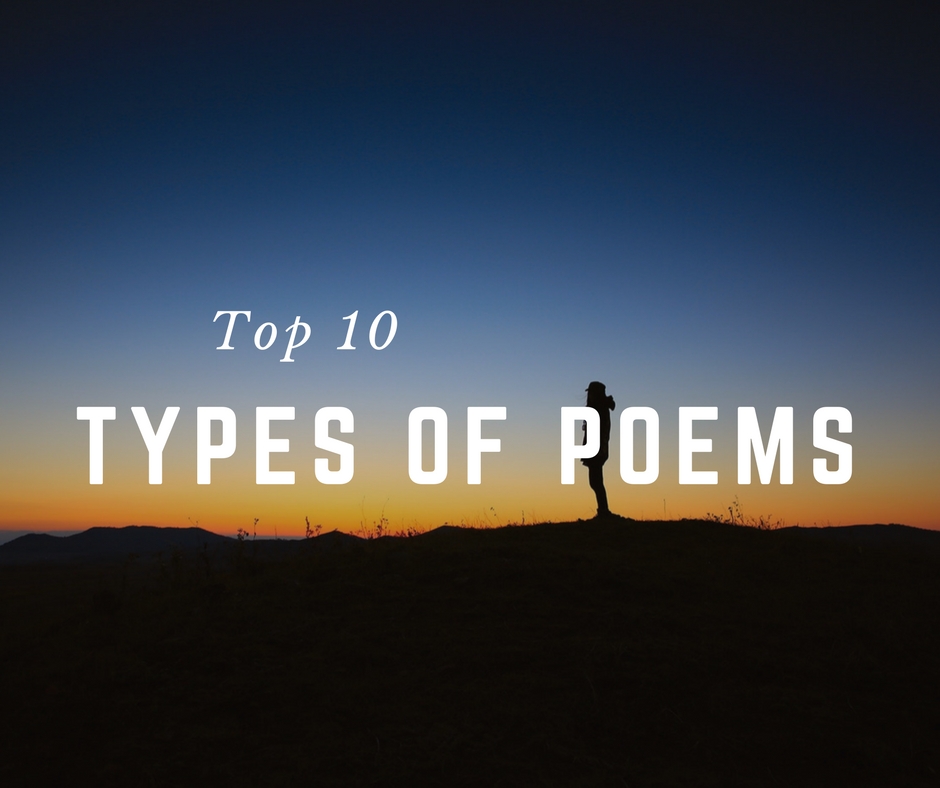 Here is a list of what I feel are the Top 10 Types of Poems, Forms or Formats. I say forms or formats because we cross some lines of distinction here that are not always easy to explain. Basically these are types of poems where people use a certain form to create them, but some are forms in and of themselves. Anyway,  I wanted to come up with a short list of the most popular poetry types. This is a basic guide. If someone throws these at you, at least you will know what they are. I hope you will try each type, and if you do feel free to share them in the comments.

Not to be mixed up with blank verse, free verse is poetic form/technique where the poet does not follow the conventions of any meter or rhyme.

This is the only poem that rivals free verse these days. People love the Haiku. It’s a 3 line poem generally where first and last lines have 5 syllables, and the middle has seven syllables.

There are various forms of sonnets, but the most popular tends to be the English or Shakespearean sonnet. It is a 14 line poem written in iambic pentameter. The poem will end in a rhyming couplet. There are much more to these of course, but this is the general definition. There is also the Italian or Petrarchan sonnet. The English sonnet seems to be the most attempted.

A Limerick is at it’s core (and there is more too them) a 5 line poem that follows a strict meter and always has a AABBA rhyme scheme.

Related in a sense to the Haiku,  the Tanka poem is basically a poem that has 5,7,5,7,7 for it’s lines. So it’s basically a Haiku with 2 seven syllable lines added on to the end.

At it’s very base this is simply a 5 line poem. So The Tanka above falls into this classification, but the most popular Cinquain that people want you to write when you say, Let’s write a cinquain is generally in English that follows a rhyme scheme of ababb, abaab or abccb.

It’s probably easier to write a sestina than it is to explain how to write one. So its a six stanza of six lines each with a triplet at the end. Each stanza has the same 6 words at the end of each line of the poem. So basically the words that end the lines fo the first stanza are rotated over and over again at the end of the lines of the next stanza.

Here is another poetic, but it’s not easy to explain nor easy to write. The most famous one of these is Do Not Go Gentle into that Good Night by Dylan Thomas. The form is basically a 19 line poem that has five 3 line stanzas. The first line of the poem and the last line of the first stanza becomes a refrains (repeated) again and again until the last stanza. Basically, line 1, 3 become beginning and ending lines of all the other stanzas.

This is a simple poetry form, newer than the rest on this page. The Acrostic is basically a poem that uses the up and down letters of a poem to spell a word or phrase. So the first letter of each line could be pulled out to spell a word.