You are here: Home / Historic Articles by Authors / Walt Whitman on Thanksgiving 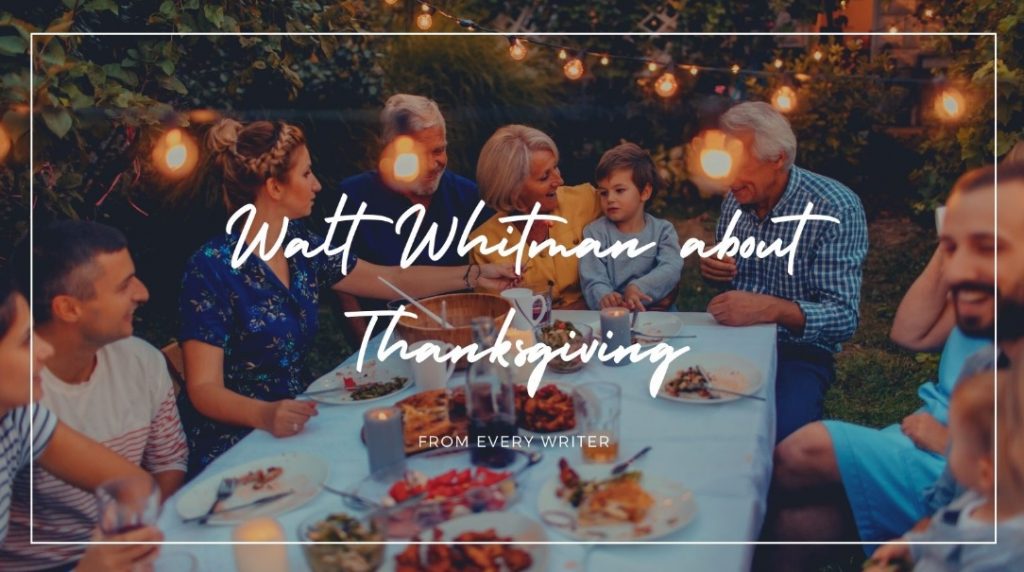 The Place Gratitude Fills in a Fine Character

Scene.—A large family supper party, a night or two ago, with voices and laughter of the young, mellow faces of the old, and a by-and-by pause in the general joviality. “Now, Mr. Whitman,” spoke up one of the girls, “what have you to say about Thanksgiving? Won’t you give us a sermon in advance, to sober us down?” The sage nodded smilingly, look’d a moment at the blaze of the great wood fire, ran his forefinger right and left through the heavy white mustache that might have otherwise impeded his voice, and began: “Thanksgiving goes probably far deeper than you folks suppose. I am not sure but it is the source of the highest poetry—as in parts of the Bible. Ruskin, indeed, makes the central source of all great art to be praise (gratitude) to the Almighty for life, and the universe with its objects and play of action.

“We Americans devote an official day to it every year; yet I sometimes fear the real article is almost dead or dying in our self-sufficient, independent Republic. Gratitude, anyhow, has never been made half enough of by the moralists; it is indispensable to a complete character, man’s or woman’s—the disposition to be appreciative, thankful. That is the main matter, the element, inclination—what geologists call the trend. Of my own life and writings I estimate the giving thanks part, with what it infers, as essentially the best item. I should say the quality of gratitude rounds the whole emotional nature; I should say love and faith would quite lack vitality without it. There are people—shall I call them even religious people, as things go?—who have no such trend to their disposition.”