First let me say thank you to all of you for being part of our contest. We got 100s of entries. We deleted many from the thread and people emailed us, again. Don’t do that with these contest please. The winners are below, but first:

If you follow the site, you may have noticed some changes lately. To be honest we have had a lot of issues. We were hit by some malware and an engine update. This has knocked us down in our rankings, which gives me high anxiety. Every Writer has ranked first on some pages for the last 15 years, to see them drop is heart breaking.

So this had to be address. I had to make some major changes, and those changes are still in process. This frankly took precedent over all the other projects we had going on. If you noticed we did not have a magazine publish October 1st as promised. The new goal is to have this horror issue out by the end of 2017.

We have our winners, and they WILL be in the magazine. Before, because of the early publication date, we could not include the winners in the print issue of our magazine. Now we can. We will also STILL be including many of the other stories from the contest in the magazine. I have to say, this was a great year for the contest! Thank you so much guys!

We will not be announcing the 500 word winners until later this week. 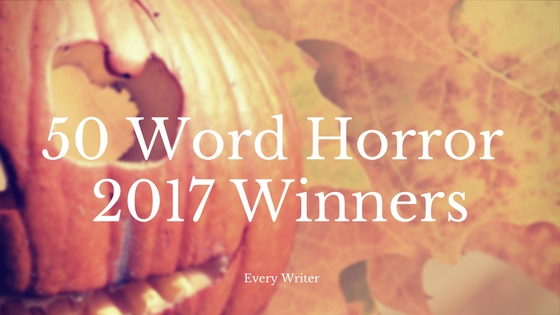 Here are our winners for the 50 word horror contest. You will be contact shortly:

Susan Oldham for The Embalmer.

The embalmer wore an expression of respectful acknowledgement.

“They are beyond pain now,” he spoke softly, regretfully.

My hands secured as they were to a swivel hook in the ceiling, he spun me round to look upon his painted dead.

“You, however,” he intoned, knife glistening, “are quite another matter.”

This story was simple was very high quality. It’s very well written. I love it.

My stomach is distended, and I’m immobilized and lying on the floor.

You only come in when it’s time to force feed me narcotics, and chocolate cake.

My mouth is bruised, from your fingers, squeezing my cheeks, and forcing the decadent dessert, down my throat.

Out of all the gore horror we got for this contest, this story was the best. It also spoke to a broader theme, and today’s events. It is also just simply a wonderful scary story. Thank you Emily.

The patties sizzled in the flames as the crowd eagerly waits; he wonders if they’ll notice his missing wife.

Being a minimalist writer, I’m always looking for the fewest words and the most punch. BBQ does it well in so few words. Even the title BBQ being attached to a horror story gave me a little twinge.

Thank you to all who entered. These 3 winners will be contacted and they all get varing levels of free promotions on our site, plus they will be featured in our print magazines.

Now, all the following stories, will be included in the upcoming print magazines. These are basically runners ups, which we loved. See if you made the cut:

The Next Bride by Laura Hudson

The scent of anticipation and cheap perfume fill the air as she throws her flowers. Women dive, grasping at petals. Press on nails and fake eyelashes litter the floor. A bridesmaid tears the heel off her shoe and stabs blindly. She picks up the bouquet from the bloody pile.

“Turn up the water heater.”

While she lay in her bath, he complied. He turned up the hot water. Way up. She screamed once.

When she came to him, boiled skin sloughing off, he asked, “Hot enough?”

She heard knocking coming from the kitchen and went to investigate. The slow knock, knock, knock was coming from inside the dishwasher. Thinking it was a dish that needed to be shifted, she opened it. Once cracked, arms reached out and pulled her in quickly closing her inside forever.

THE TOOTH FAIRY by Storm McAdrian

The straps were tight as her stomach. Bright lights blinded her, tools clinked, work began. One by one he hammered and yanked. No screaming today; she choked on her blood falling in and out of consciousness. “Tooth fairy, tooth fairy,” he hummed. Her eyes wide – silence.

HOW I SAW MYSELF

“What are you doing?” I shriek in terror. The creature in front says, “Helping you see yourself.” It grins wickedly. A blinding pain shoots through me. I blink my eyes and

realize that I am seeing myself lying on floor from a place that I can never return from.

I hear his quick feet.

I run to my room.

I feel nails in my stomach.

I taste iron in my mouth.

I see his malicious grin.

Then, I see and feel nothing.

I think she saw me today.

She looked towards me before the shadows stole me away again. I’ll try harder tomorrow like I always do. Maybe then she’ll see me for who I really am.

Maybe then I’ll be more than just that thing at the corner of her eye.

It was their wedding day, a bad vibe jolted through her entire being. She suppressed a sigh. Her head started to spin wildly, the memory of his confession pained her. The

affair with her sister; she cried out in agony as she realized; there in her hands rested his bloody heart.

There was nobody near the register.

I started walking out.

“Guess this candy is free!” I shouted.

I pulled, to no avail.

Someone was coming down an aisle.

The lights went off.

Why does it keep itching? I scratched until the red stuff poured out, then I scratched all the way to hard white stuff. When will it stop? I’ll keep scratching and digging until it’s over. I need to pull away this soft warm stuff, but dang, it’s stuck tight.

The armchair was a bargain because its upholstery was stained. At home, the stain spread, a Rorschach blotting out fabric. I woke the night before returning it, covered in

chill bumps. The bedclothes had been peeled away. I screamed, frozen, helpless against a moonlit stain creeping up the bed.