You are here: Home / Stories / Driving the Loop by J.M. McNeely-Kirwan 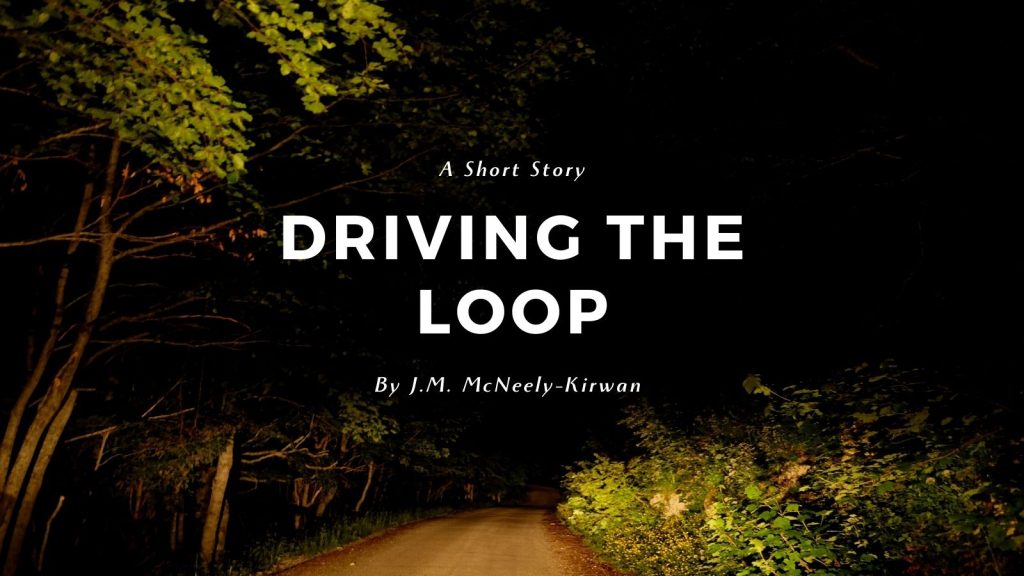 It felt like this night had lasted for a thousand years, as if he’d seen the same trees and abandoned towns countless times. The old Cadillac was holding up, but its gas tank was almost empty.

Manny hadn’t seen a soul in ages, but when he came around a tight curve and saw the boy he was strangely unsurprised.

The boy was maybe 17, with dark hair hanging in his eyes. He straightened up and raised his left hand to hesitantly thumb for a ride.

Maybe the kid was dangerous, but he sure didn’t look it. Besides, who knew how long the kid would be stuck here without a ride? Manny hit the brakes, scanning the trees as he slowed. For some reason, he couldn’t shake the feeling that this forest was hiding more than the occasional deer.

As the boy hurried up and opened the passenger side door, Manny was struck by a realization. He’d never picked up a hitchhiker in his life. Not ever. It had been drummed into his head. Don’t play with matches. Don’t drive drunk. Don’t pick up hitchhikers.

The boy, his young face dominated by old eyes, gazed uncertainly at Manny, one hand on the door handle.

“Bottles of water on the floor. Box of snack bars, too. Kinda taste like cardboard, but you can have as many as you want.”

“Thanks,” muttered the boy. He rummaged, then started stuffing down breakfast bars like there was no tomorrow. Typical teenager.

Manny started to drive again, comforted by the company. But then the boy asked a question, in a voice as old as his eyes.

“Where are you going, Manny?”

There had been no introductions, no way to learn his name. Worse, in the next moment, Manny realized he had no idea of where he was going, or why.

The boy went on, still eating.

“You need to get off The Loop before you run out of gas, Manny. You really do. Oh, and don’t stop at the fake accident.”

Another curve and they saw a car sitting sideways across both lanes. Worried, Manny slowly drove around. Then something tapped at his window. He turned to see a pale child-sized thing inches away through the glass, mouthing at him hungrily. He hit the gas.

“Turn left here,” said the boy, after another mile or so.

Suddenly, Manny saw a side road bearing left, one he’d never noticed before. He turned.

Manny woke up parked in front of a brightly lit 24 hour desert truck stop. He was on his way to a wedding in Tucson.

“Weird dream,” he thought. Only later did he see the small handprints on every window.