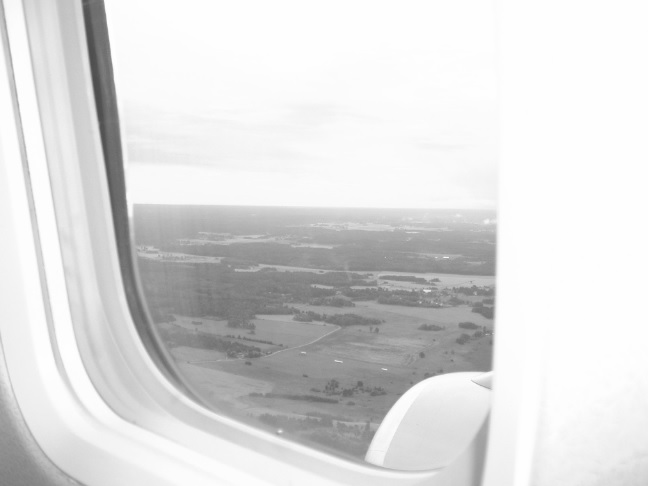 From the comfort of his airline-assigned seat, Terry watched the storm raging outside his window. Terry hated to fly. Bumpy flights like these were the worst. Terry decided to get his mind off the turbulence the only way he knew how: idle chatter.

“These damn little planes are so cramped. Never enough room for your legs.” As if to punctuate Terry’s point, a booming thunderclap rang out that seemed to rattle the whole plane. The woman sitting next to Terry nodded, but clearly wasn’t interested in Terry’s opinion on air travel.

Unfazed, Terry continued. “And the kids. The damn kids. I’ve flown enough to know it isn’t the babies that cause the most trouble, it’s the two to four year olds. Loud, obnoxious, and big enough to shake your seat as they kick it from behind,” Terry sputtered hatefully. He almost continued, then thought better of it.

Two long minutes later, the plane lurched downward and quickly corrected, making Terry’s stomach jump. Suddenly anxious, Terry continued his earlier speech. “Not like the parents are any help, either! Just coddling the little terrors, saying yes, it’s ok to bother everyone around you, because you’re just a perfect little…”

Terry’s cut off his narrative mid-sentence. Something was wrong. The hum of the engines was gone, as was the roar of the storm outside. Then, something caught Terry’s eye. He was near the front of the cabin which made it unmistakable. As if from nowhere, a man in a finely tailored black suit now stood at the front of the one aisle, carrying a fine leather briefcase.

The man had sharp features. A long, pointed nose, slender cheekbones, and short cropped hair. But his eyes…they seemed to be completely black. No color to be seen. Dead.

By now, everyone on the plane had noticed the lack of normal airplane noise and were focused on the new arrival.

The man began to speak. “Good evening, everyone. It is my sad duty to inform you that you are all dead.” Though the man spoke with a loud, firm voice, his inflection wasn’t quite right. Like a computerized voice trying to figure out how a human would speak, but getting it just slightly wrong.

“Three minutes ago, a lightning strike damaged the auto-pilot systems on this airplane. Twenty-five seconds ago, your co-pilot, James Forrester, 27, father of one, was killed when an undiagnosed aneurism in his brain ruptured.”

A shocked murmur ripple through the plane. Without breaking rhythm, the man continued, “In thirty five seconds, your pilot, Megan Peters, 56, mother of two, grandmother of two, will suffer a fatal heart attack from the stress of watching her co-pilot die. The plane will crash. Each of you will die.”

People gasped. Others looked around uncertainly. It wasn’t until this moment that Terry realized: the man had not moved his mouth. Only the faint whisper of a smile rested across his pallid lips. He realized he wasn’t even “hearing” them; the words seemed to just slither into Terry’s head.

Someone from the back of the plane shouted out, “How do you know that? Who are you?”

The smile got bigger, allowing a glimpse of pointed teeth. Again, his mouth did not move as he replied, “I am Death.”

“Bullshit!” a big guy shouted from the front row as he stood, reaching for the suited man. “This is just some nut jo…” he tried to say, but as the big guy grabbed the man’s arm, his sentence was cut off and he collapsed to the floor. Terry could see trickles of blood running from his still-open eyes and nose. He did not move.

A woman screamed. People in the back of the plane strained to see what had happened. News spread quickly.

“You are all dead.” He paused. His smile grew, showing more of the razor sharp smile. “However,” the man said, “I am here to offer you all… a bargain.”

“I am…” he paused, as if searching for the right words. “In need,” he finished. “If each of you agree to carry out a single task on my behalf, I will spare your pilot her life. She will land and you will live.”

“The decision must be unanimous,” the man continued. “If you break our pact, the consequences would be…” he said trailing off. “Dire. For you, and for those you love. Consider.”

A long moment passed, and the man surveyed the cabin. He seemed to make eye contact with everyone. As Terry locked eyes with the man, with those dead eyes, his skin crawled. But at the same time, he felt a pang of relief. He wanted to live, and the man knew that. The man nodded almost imperceptibly and refocused his gaze at the next passenger.

Once finished, the man began to walk down the aisle, reaching into his briefcase. He took small slips of parchment from the case, handing one to each person. Terry watched, neck twisted, as the man handed out the last slip. The voice returned once more, stating “We have an accord.”

With as little fanfare as his arrival, the man was gone. The roar of the engines returned and the storm resumed its assault on the plane. No one spoke for the uneventful remainder of the flight. Two ambulances awaited the plane on the tarmac; one for the guy passenger (who had suffered an apparent heart attack) and another for the copilot.

Terry waved to his wife as he pulled out of the garage for his commute to work. He glanced down at the small parchment from three years ago. Today was the day. Instead of getting into the northbound lane that would shuttle him to work, he got into the southbound lane. He reached past the recently sharpened kitchen knife he had hidden in his bag, and pulled out the road map he’d packed. It was a long way to his destination, but he was willing to make the drive. Terry hated to fly.