You are here: Home / Short Short / Frozen Treats in the Dead of Night by Rachel McGirt 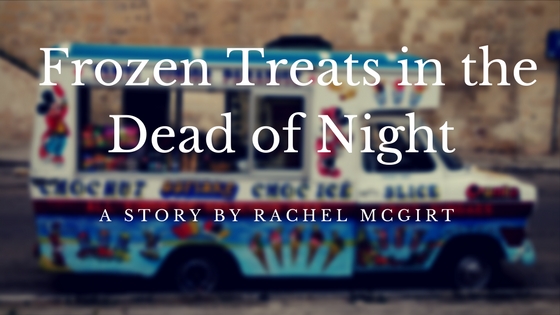 Frozen Treats in the Dead of Night

Richard woke to the sound of the screen door slamming. Confused, he turned to check the clock. 3:17 am it blinked at him, before going dark. A knot of anxiety cramped his stomach. He knew something was wrong.

He got out of bed, reaching for his robe. That’s when he heard it. Terror replaced the anxiety and he fought the urge to soil himself. Floating in the window, on the summer night’s breeze, was the tinny, discordant music of an ice cream truck. He shivered as the cool breeze reached the sweat that now covered his body. He clenched his glutes tighter than before. How had they found him and Lucy?

On instinct, his feet started moving, carrying him towards the bedroom door, his subconscious determined to prevent what it knew was happening. He was downstairs and out the front door before his conscious mind could register his body’s movement.

His brain reeled with memories of what happened three years ago, when his wife and son were taken. No one believed his story about alien abduction and how Sarah had tried to save Max, only to be snatched away as well. At first, he resolved to stay in their home, in the hopes that Sarah and their son might return. When Lucy started school the murmured rumors that he harmed his family or had lost his mind turned into outright ridicule of his precious daughter. He moved the two of them across country.

His mind snapped back to the present as his feet started moving again. He had to reach Lucy before she made it to that damnable truck and the grasp of her would-be abductor. He crossed the yard in a dozen long strides and swooped Lucy up, not knowing if he would have to fight or flee. Lucy’s small body was limp. She was in a trance.

Before Richard could fight or turn to run, a light brighter than a hundred suns pierced his eyes and he yelped in indescribable pain. Still holding Lucy, he passed out as a tractor beam lifted him, his daughter, and the decoy truck.

He couldn’t know that in only a brief moment he would open his eyes to the bridge of his mother ship, his family, and his debriefing as a reconnaissance officer.