You are here: Home / Horror Stories / One Scoop Too Many By Josh Senecal 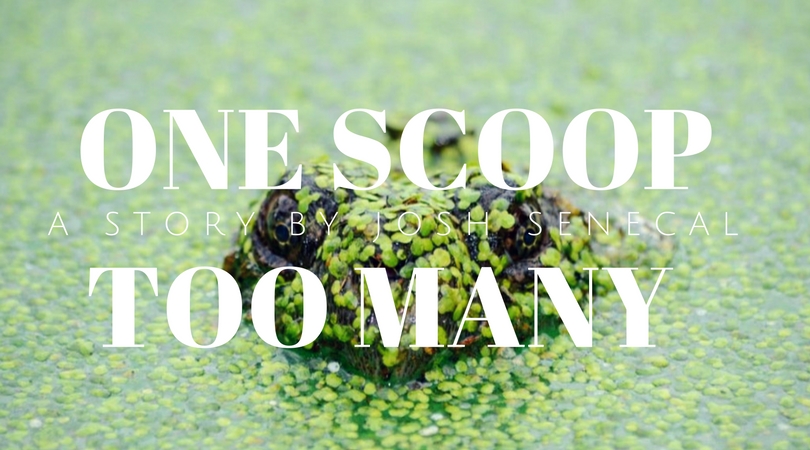 One Scoop Too Many

The decrepit vehicle creeped along the side road, it’s hypnotic tinny tune warped “Turkey in the Straw” into an echoed mess across the wooded landscape. The children drawn out, induced by inherited instincts pasted down the generations, the ice cream truck had arrived. Parents peeked out the doors as the children ran with an artificial hunger for frosted delights. The adolescents stood idly by, emotionally restrained in showing public desires. Meadow road, a heavily wooded and looping cul-de-sac hugged by Pennichuck Pond, a favorite watering hole of the high school students.

“Oh… I can smell poor from here!” Jon grinned out a mellow tone sneer, the four teens snickered at the curb.

The ice cream man’s hands halted momentarily, a restrained shake of anger came over him as he handed the oblivious little girl her watermelon pop.

“I can’t see him.” Jill eyed the painted dragon trash hole embedded on the door. “But it’s Billy, everyone knows his family owns this heap of crap.” Jill thumbed her distaste over the smell of overheated garbage.

The truck rocked as the door slid open and a big brawling man stepped out, he eyeballed Jill. Jon stepped back snug into Mary and Ben as the man bee-lined Jill’s parents in her driveway. The children were sugar rushed and circled around like tops, one hurled a big purple mess onto Mr. Porter’s perfect lawn.

“That’s gotta be food dye number two, it was blue when it went down!” Ben bellowed out a laugh.

The conversation was calm from Jill’s point of view, she tried to hear but it was too far. She was wondering what possessed him to jump out like that when she noticed the open door. Billy looked out the service window at the kids while his mother and older sister stared her down with burning eyes of fury! The woman in the family were quite big she thought, just like the father, no wonder his sister won the Hammer Throw every year! Her trophies still hung in the halls and now she scoops ice cream.

Jill began to think this was getting a little awkward, it’s getting late and the bullfrog’s nightly croaks were building up at the water. Time for them to go, this is a service not a clubhouse. Jill’s father called her over, the group followed.

Mr. Jones sighed. “Jill. Please apologize to Mr. Porter and his family, you were out of line.”

“Dad, you always say -Some will always have and others…” Mr. Jones cut her off, waving a low hand gesture –a nervous tick.

“That’s not what I was…you didn’t listen to me. Just, just go apologized!” Jill’s father spun around and briskly walked inside; Jill’s mother gave out an anxious laugh and scooted away.

Mr. Porter’s face looked calm and untouched by life around him, he was uninterested in Jill’s mumbled apology. “Sorry Mr. Porter, Billy is a good kid and well liked in school.”

She was dying inside with embarrassment, how could her own father run off like that? She was not going inside to hear his ramblings of how embarrassed he was or his “Play the game” speeches.

“Come on.” Jill said to the group. “We have a party to plan, the parents will be at the town fest this weekend. It’s time for the summer Pennichuck pond party and we only have 2 days!

The humid New England summer came fast and the preparations were behind schedule. The group split up the tasks, the party was tomorrow. Jon and Jill handled the decorations while Ben and Mary handled the tables and chairs. The gang worked long and hard into the night; the lights along the narrow path were nearly drained.

Ben dumped a pile of chairs next to the deck. “Mary is still not here?” he was talking to the pond. “She’s gone again! I’m going up to get more supplies and give her an earful!” Ben stormed up the path.

“Ding a ding-ding-ding.” Echoed off the water, a subtle paused infected them.

“Can you get me Death by Chocolate please?” Jill called out. “Let’s finish up and go.” She shrugged at Jon, she was too hungry.

When Ben finally hit the road, he thought how lucky he was as he spotted the ice cream truck idled on the curb. The window was darkened by a mounted overhead light; a figure moved along the open engine compartment.

“So hot tonight, glad you’re here!” He tried to induce a tone of friendship. “Broken down or can I-“ The shadowed hands, in a single motion lifted Ben and fed him head first into the engine. A whimpered grown left his body as he was eaten by the cooling fan, his mangled body sizzled on the hot motor.

Jill and Jon soon emerged tired, hungry and annoyed at the missing comrades.

Jon lightened up as he squinted by the list of ice cream. “Gosh that music is loud, I can’t hear myself think.” He muttered.

“Ben get my DC?” Jill interrupted.

The figure handed her a cone. She turned and dug in, just couldn’t wait any longer. A motion at her eyes corner, was that of a pair of feet dangling out the window, how unsanitary!

Jill turned around. “This has chunks and salty. I didn’t want-” The truck had pulled away; little stones popped under its tires as the melody sung on.

“Ding a ding-ding-ding…” Jill stood still, ears keyed in as it faded away.

“Jon?” She looked around, bit down into the fleshy chunks, a hard jaw-stopping crunch startled her.

Jill looked into the blackened trees and fingered the small object as her eyes adjusted. Wide eyed to gain assistance by the moonlight, a diamond stared earring looked back at her.