You are here: Home / Saki / REGINALD IN RUSSIA by Saki 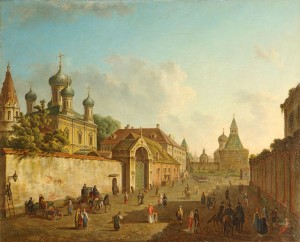 Reginald sat in a corner of the Princess’s salon and tried to forgive the furniture, which started out with an obvious intention of being Louis Quinze, but relapsed at frequent intervals into Wilhelm II.

He classified the Princess with that distinct type of woman that looks as if it habitually went out to feed hens in the rain.

Her name was Olga; she kept what she hoped and believed to be a fox- terrier, and professed what she thought were Socialist opinions. It is not necessary to be called Olga if you are a Russian Princess; in fact, Reginald knew quite a number who were called Vera; but the fox-terrier and the Socialism are essential.

“The Countess Lomshen keeps a bull-dog,” said the Princess suddenly.
“In England is it more chic to have a bull-dog than a fox-terrier?”

Reginald threw his mind back over the canine fashions of the last ten years and gave an evasive answer.

“Do you think her handsome, the Countess Lomshen?” asked the
Princess.

Reginald thought the Countess’s complexion suggested an exclusive diet of macaroons and pale sherry. He said so.

“But that cannot be possible,” said the Princess triumphantly; “I’ve seen her eating fish-soup at Donon’s.”

The Princess always defended a friend’s complexion if it was really bad. With her, as with a great many of her sex, charity began at homeliness and did not generally progress much farther.

Reginald withdrew his macaroon and sherry theory, and became interested in a case of miniatures.

“That?” said the Princess; “that is the old Princess Lorikoff. She lived in Millionaya Street, near the Winter Palace, and was one of the Court ladies of the old Russian school. Her knowledge of people and events was extremely limited; but she used to patronise every one who came in contact with her. There was a story that when she died and left the Millionaya for Heaven she addressed St. Peter in her formal staccato French: ‘Je suis la Princesse Lor-i-koff. Il me donne grand plaisir a faire votre connaissance. Je vous en prie me presenter au Bon Dieu.’ St. Peter made the desired introduction, and the Princess addressed le Bon Dieu: ‘Je suis la Princesse Lor- i-koff. Il me donne grand plaisir a faire votre connaissance. On a souvent parle de vous a l’eglise de la rue Million.'”

“Only the old and the clergy of Established churches know how to be flippant gracefully,” commented Reginald; “which reminds me that in the Anglican Church in a certain foreign capital, which shall be nameless, I was present the other day when one of the junior chaplains was preaching in aid of distressed somethings or other, and he brought a really eloquent passage to a close with the remark, ‘The tears of the afflicted, to what shall I liken them, to diamonds?’ The other junior chaplain, who had been dozing out of professional jealousy, awoke with a start and asked hurriedly, ‘Shall I play to diamonds, partner?’ It didn’t improve matters when the senior chaplain remarked dreamily but with painful distinctness, ‘Double diamonds.’ Every one looked at the preacher, half expecting him to redouble, but he contented himself with scoring what points he could under the circumstances.”

“You English are always so frivolous,” said the Princess. “In Russia we have too many troubles to permit of our being lighthearted.”

Reginald gave a delicate shiver, such as an Italian greyhound might give in contemplating the approach of an ice age of which he personally disapproved, and resigned himself to the inevitable political discussion.

“Nothing that you hear about us in England is true,” was the
Princess’s hopeful beginning.

“I always refused to learn Russian geography at school,” observed
Reginald; “I was certain some of the names must be wrong.”

“Everything is wrong with our system of government,” continued the Princess placidly. “The Bureaucrats think only of their pockets, and the people are exploited and plundered in every direction, and everything is mismanaged.”

“With us,” said Reginald, “a Cabinet usually gets the credit of being depraved and worthless beyond the bounds of human conception by the time it has been in office about four years.”

“But if it is a bad Government you can turn it out at the elections,” argued the Princess.

“As far as I remember, we generally do,” said Reginald.

“But here it is dreadful, every one goes to such extremes. In
England you never go to extremes.”

“We go to the Albert Hall,” explained Reginald.

“There is always a see-saw with us between repression and violence,” continued the Princess; “and the pity of it is the people are really not in the least inclined to be anything but peaceable. Nowhere will you find people more good-natured, or family circles where there is more affection.”

“There I agree with you,” said Reginald. “I know a boy who lives somewhere on the French Quay who is a case in point. His hair curls naturally, especially on Sundays, and he plays bridge well, even for a Russian, which is saying much. I don’t think he has any other accomplishments, but his family affection is really of a very high order. When his maternal grandmother died he didn’t go as far as to give up bridge altogether, but he declared on nothing but black suits for the next three months. That, I think, was really beautiful.”

The Princess was not impressed.

“I think you must be very self-indulgent and live only for amusement,” she said, “a life of pleasure-seeking and card-playing and dissipation brings only dissatisfaction. You will find that out some day.”

“Oh, I know it turns out that way sometimes,” assented Reginald.
“Forbidden fizz is often the sweetest.”

But the remark was wasted on the Princess, who preferred champagne that had at least a suggestion of dissolved barley-sugar.

“I hope you will come and see me again,” she said, in a tone that prevented the hope from becoming too infectious; adding as a happy afterthought, “you must come to stay with us in the country.”

Her particular part of the country was a few hundred versts the other side of Tamboff, with some fifteen miles of agrarian disturbance between her and the nearest neighbour. Reginald felt that there is some privacy which should be sacred from intrusion.