You are here: Home / Literary Story / In the Rain by Sara Marchant 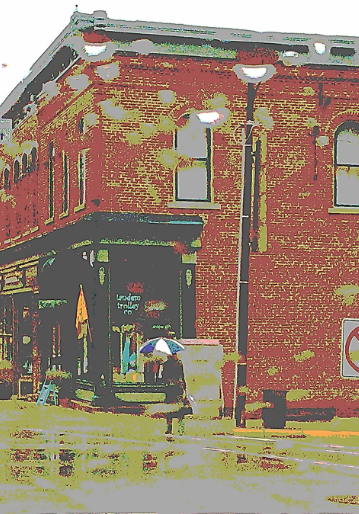 That day when we first kissed was a rainy Tuesday. We met for an innocent coffee while dark clouds built over the city. We talked about everything, and nothing, except the risk we were taking. We couldn’t break eye contact long enough to order food in the small café where no one we knew would ever frequent, but drank cup after cup of the bitter liquid until we shook with more than mere longing.

The rain washed down the dirty windows as we sat in a far corner, the watery sheets providing cover from any eyes that strained to see us from outside. The rain washed the city, the rain hid us, the rain hushed our whispered confessions. We felt safe inside the unknown café as evening fell, and time- time outside our time together- began to draw us back again. We left our café together, not daring to touch.

The rain, our rain, stopped, but the pavements were still damp, the ozone scented air still moist. We walked side by side; our hands didn’t hold, our elbows went untouched, but light could not shine between our bodies. We rounded the corner, dreading the moment that would separate us as it approached, when we saw them.

We saw the couple, but they did not see us, so wrapped in their furious hurt. She was up against the wet building, her umbrella forgotten at her feet. He was against her, barely containing his anger. We could see it in his splayed fingers. Whatever words they exchanged are lost because their fury closed our ears, averted our eyes, hurried our steps. Their strife, like our love, was private, unassailable, not open to interpretation by others.

Their anxiety walked with us. It surrounded us like the damp air. Now our bodies weren’t so close, our stride so loose, our conscience so clear. The air was so longer scented with fresh rain fall, but wet ash and fogged bus diesel. The attention awakened by the quarreling couple now strayed to us. We felt it. We quickened our step to avoid eyes that pried and ears that listened, we quickened to avoid the guilt that followed close on our heels.

We when reached the next corner, we knew, we would separate. We would turn away to our own lives, outside this concealing city, away from the covering rain, and anonymity of the people encountered on the streets. We paused, briefly. We turned and faced each other. We kissed. We kissed that day for the first, and the last, time. And then we went home to our spouses.