You are here: Home / Friends Story / My Dinner with Mighty Mouse by David Lohrey

My Dinner with Mighty Mouse 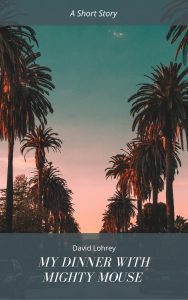 I once knew a fat lady in Hollywood who played tennis with Paul Mazursky, back in the days when it took artists three hours to finish breakfast. Beverly and Fairfax was the place to be, sitting out on the sidewalk, eating the $3.95 special. So the coffee was watery. This was before
Starbucks and the triumph of Seattle. LA was still LA.

My friend, the fat Jewess, liked to sleep with black tennis players, the more the merrier. Who can blame her? Different strokes for different folks, as we said to ourselves over and over.
This friend had a way of getting around and one of her best friends was a new comedian who liked to dress up as Mighty Mouse and sing. He became famous for being an idiot but gained glory by dressing like Elvis.

I hate star-fuckers. This clown in tights was of no interest to me. I’d heard of him and probably had seen him and may even have liked him, but I didn’t hang out on Santa Monica oulevard to meet actors. I didn’t play billiards with the hope of spotting somebody famous. Not my style. Then I made the mistake of saying something to brother the tourist from Bethlehem, Pennsylvania, the now-deserted steel town which sells tomatoes and sweet corn at busy intersections.

I was a fool and still am. I told my brother I knew Mighty Mouse and he started to foam at the mouth. Back in Bethlehem, they still called Jerry Mathers a super star. Hollywood, at that time a run-down stretch of inner-city squalor populated by refugees from Soviet Armenia and gangsters from El Salvador, was still thought to be glamorous. Say the name and people wept. So it was with my big brother, who wore a baseball cap in reverse and drove a Pontiac. Once he knew that I knew a lady with Hollywood connections he couldn’t sleep. He had to meet Mighty,
so I set it up. Or I should say Carole did.

Carole. That night we went to a restaurant off Beverly that served macro-biotic spinach to nuts. This guy, the impersonator of Elvis, was a fanatic when it came to food. He liked to eat alone and always sat in the same spot. Carole knew where to find him and although she knew him well, she didn’t consider the fact that he wouldn’t want to be disturbed. As a matter of fact, he valued his privacy as much as he hated beef. Now I’m not saying she was sucking his dick, but she knew him intimately. She called him but neglected to say she’d be bringing along a couple of commoners from the Outback.

In we walked. He looked up and went back to eating his tofu. He didn’t look up again.
Instead, he seethed. He was in an instant rage. Carole began to apologize. He didn’t complain. He said nothing. She whined. Then she introduced us. I smiled and felt miserable. My brother didn’t notice. It was a great honor, he said, to meet a famous mouse. Could he have his autograph, could he try his tofu, could he sip from his cup? Yes, he would be thrilled to join him for dinner. “Can I get a menu?” What’s it like to be famous? “I just love Saturday Night Live.” When I finish kissing your ass, would you care to have your balls licked? I was mortified. Mighty seethed. Carole blushed. I turned to stone and couldn’t move. I stopped breathing. My brother gushed.

And finally we got out of there. We ran. Carole was hysterical. She knew she had blown
it. My brother wanted to meet back again for breakfast. “Does he like tofu burritos?” He hadn’t noticed that Mighty was furious. Isn’t that marvelous? When I told him, and got Carole to back me up, he denied it. “But he was so friendly. He was so courteous.” It was his impression that we had made his day. He’d certainly made his. It was the greatest day of his life. Now he wanted to go to Barney’s Beanery on Santa Monica, in hopes of finding Tom Cruise. “I’ll buy him a beer.”

David Lohrey grew up in Memphis. He graduated from U.C., Berkeley. His plays have appeared in the UK, Switzerland, Croatia and, most recently, in Estonia. They are available online at Proplay (CA). His poetry can be found internationally in Softblow (Shanghai), Cecile’s Writers’ Magazine (The Hague) and Otoliths (Australia). In the US, recent poems have appeared in Apogee, Abstract Magazine and Poetry Circle. Several have been anthologized by the University of Alabama (Dewpoint), Illinois State University (Obsidian) and Michigan State University (The Offbeat). His fiction can be read in Dodging the Rain and Literally Stories. His study of 20th century literature, ‘The Other Is Oneself‘, was published last year in Germany. Machiavelli’s Backyard, David’s first collection of poetry, appeared in August, 2017. David is a member of the Sudden Denouement Literary Collective. He lives in Tokyo