You are here: Home / Horror Stories / Tales of Marlow, Pennsylvania by Brad Yaskowitz 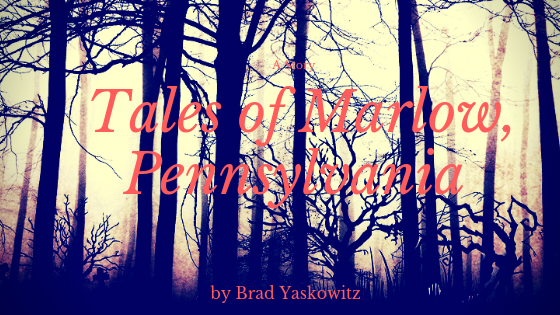 Mary Lewis, twelve-years-old, is awoken in the night to the sound of pecking at her window. When she investigates she finds a crow perched upon the sill. To her amazement, it speaks to her, complaining of the cold and asking to be let in. Mary cannot say why, but this creature fills her with utter revulsion, and she rushes to bed, hiding under the covers.

It is well that she did, for in the darkness she could not see what the crow is attached to.

The next morning the crow is gone, and Mary decides that it was just a dream. She then realizes her bed clothes are covered in blood, and that she has become a woman.

On a sunny spring day, Five-year-old Abigail Thatcher picks wild berries with her mother on the border of their farm. Her mother, Joanna, pricks her thumb on a thorn. She is distracted for only a moment, but it is long enough for Abigail to somehow wander off.

They search for days but they never find her.

A slave belonging to the Thatcher family returns from town to find a curious object propped up against a tree on the path. It is a child sized wooden doll. He recognizes the clothing it is dressed in as belonging to little Abigail Thatcher, who has been missing for over six months. The doll’s painted face is chipped and worn, but its expression of delight is plainly visible.

They find chocolate in its mouth.

Wesley Braver is to be executed. At the time of his death, a large owl perches atop the gallows he is hung from and stares at all gathered. Mary Lewis, now betrothed, watches from the crowd. She feels acute discomfort at the bird’s gaze. Braver’s body is not cut down for over a week, for that is how long it takes for the owl to starve.

Nobody seems to remember that any of this happened.

Mary Lewis, now Mary Mueller, has a boy of her own that she has named David. David races to meet her in the garden and tells her that a large owl has taken roost in the Thatcher’s barn. Mary does not know why, but she forbids her son from ever entering that barn again.

Thankfully, her son will keep this promise.

Years later her grandson will not.

Joanna Thatcher and her husband, John, are visited by their daughter. She raps at their door all night, crying and begging to be let in out of the cold. They do not open the door. Twenty years have passed, and Joanna and John have grown old, but the voice of their Abigail is still that of a five-year-old. The neighbors bar their doors as well.

One that peaks out his window and sees what is really knocking at the door never speaks again.