You are here: Home / Horror Stories / The Intruder by Brad Yaskowitz 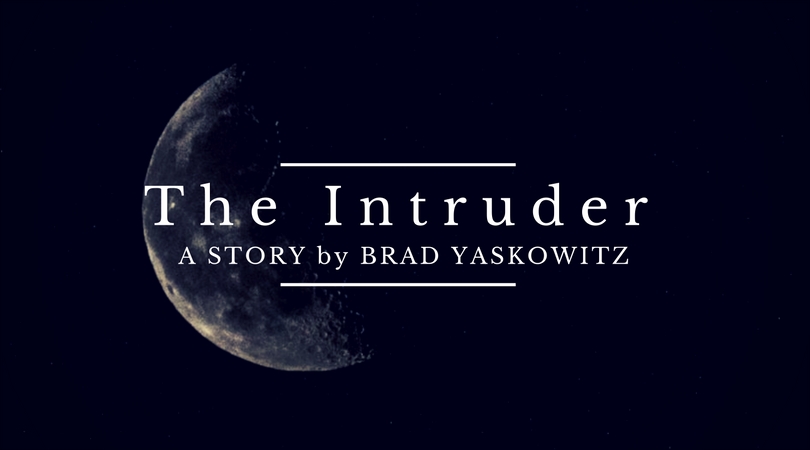 I’m standing in the desolate lunar surface. Before me is the planet Earth, behind me is the blackness of space. In the silence, in the cold, I’m reminded of growing up in Montrose, Colorado. It was my time in the woods that inspired me to become an astronaut. I think the virginal feeling of the forest under the ice cold burn of the stars on a clear night made me want to explore the unsullied vistas of the cosmos.

With startling clarity, I’m reminded of an instance that happened when I was a younger man. I was hunting one snowy evening, listening to the silence of the wilderness. I felt like an intruder in that place: a modern man invading a primordial and sacred ground, where my reason and logic had no place. In the darkness, with the cold and the muffling characteristic of the snow, my senses felt woefully inadequate to contend with those of the creatures that called this place home. I recall feeling silly and ashamed.

It was foolish to be out alone at night, and I decided to turn back. My footprints drew a garish line through the landscape, and though I knew it would guide me home, carving the path into the undisturbed snow felt like an unforgivable insult.

I moved on, and soon that lizard part of my mind responsible for hunger and fear began to itch. I knew that I wasn’t alone. The trees around me offered no hint as to what among them watched me, but I knew something was out there. I clutched the rifle close to my chest, and its weight helped to slow my racing heart. We were taught at a young age how to deal with predatory animals. Bears and wolves were dangerous, no doubt, but if you made enough noise and didn’t sneak up on them, usually they’d leave you be.

I am of the mind that mountain lions have the capacity for malice. I’ve held this opinion since that night when, as I followed my tracks home, I came across a second set of prints that were decidedly clawed walking in tandem with my own. Icy dread filled my belly as I realized that the order of things had been altered. I was being hunted. Worse yet, I was being hunted by something that knew me, knew what men were capable of, and unlike the bear or the wolf, it just wasn’t impressed. The mountain lion seemed to watch me from just out of sight, but he was there, alright. Teasing me.

As I moved on, fresh dread bubbled inside me, for I realized how long the footprints followed mine. For miles he had been stalking me, silently observing, like child with a magnifying glass staring at an ant. Mere curiosity was the only thing stopping him from focusing the angle of the light and ending me.

I did not belong in this place. I was transported to a time when men feared the dark and what it concealed. He huddled in his cave, trembling around the feeble warmth and light of his fire. Each flicker of the light cast a nightmarish shadow on the wall, that could have been a saber toothed tiger, or a capering demon, or something worse all together. But soon that most primal and basic emotion was mastered, and man set out from his cave and into the great wide world. He had conquered his fear.

I somehow made it back to my lodge that night, only because whatever unknowable logic moved that great cat allowed me to. I vowed I would not go out after dark like that again.

I’m thinking about Montrose, Colorado not because being here reminds me of those star filled skies I looked to as a boy, or the chill I feel through my suit, or even because the North American landscape is laid out before my eyes so very far away. It’s because I’m following the garish line of my footsteps in the lunar dust leading me back to my shuttle, and I see that a second set of prints have joined my own.

They, too, are decidedly clawed.

I am an intruder in a primordial sacred ground, and I have broken my promise: it is always dark on the moon, and I don’t think I’ll make it home this time.