You are here: Home / Adventure / Trapped In A Bottle by Ruben Michael Molina 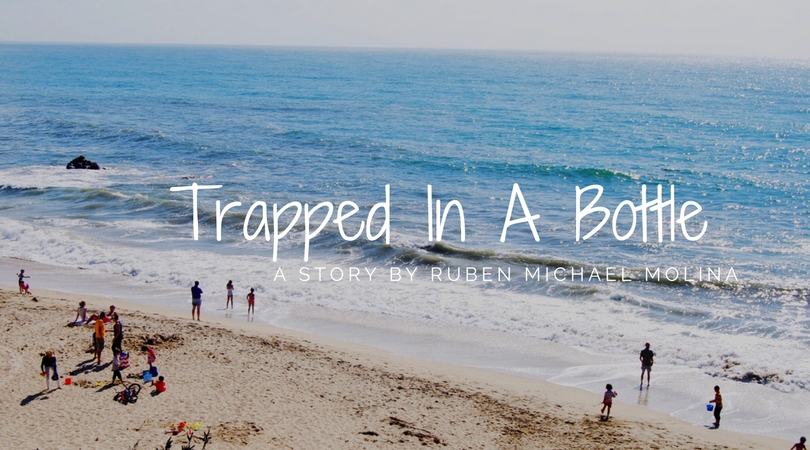 Trapped In A Bottle

The sun sizzled the soft tanned skin of Alison Bailey, as she lay comfortably on her favorite azure beach towel; the soft gurgle of the ocean tide lulling her into a peaceful slumber. The beach was a place that Alison visited when felt the world shatter around her, when the gratifying constants of her privileged life disappeared and the capricious nature of reality surfaced its ugly head. In many ways Alison was an escape artist. When at the throes of thick emotional turmoil, she had always been able to locate a trapdoor that would lead her to depths of blissful ignorance. There she remained in those depths the past five years, any desire to escape swallowed entirely by years of repression; no longer blissfully ignorant, just ignorant.

Alison opened her eyes and frowned. An irritating tapping sound was emanating from somewhere in front of her spot. Raising her head up slightly, she looked down her legs, past her feet, and saw a seagull pecking a half-buried glass bottle. Stupid bird thinks it’s food, she thought and laid her head back on the towel. The seagull continued pecking at the bottle with such irritancy, that Alison sprang to her feet and shooed the bird away.

She watched it soar in the air, and then turned to the partially excavated bottle; it was a wine bottle, and an ancient one at that. Carefully, she dug the bottle out and held it in her hands. It was smooth with wear, and through the murky, greenish glass she could see that something was trapped inside. A note, she thought romantically. Alison yanked off the decrepit cork and tipped the bottle emptying the scroll into the palm of her hand, she looked at it with growing curiosity—a message in a bottle.

Unraveling the scroll carefully, she saw barely legible scratchings and began to read:

Father, I write to you now as ocean water fills the bowels of the Dorado—I will not make it back. You once asked me if I was capable of happiness, if it was possible to clear away clouds of apathy and depression that long colored my personality and soul. I can finally answer, yes. Looking now through Death’s spyglass, the answers reveal themselves with blinding clarity; I am swollen with regret. I must go now to be with the remaining crew in solidarity so I will leave you with this—in my brief twenty years I feel as though I’ve been loved a lifetime over.

Tears welled in Alison’s eyes as she finished a man’s final thoughts. She rolled up the parchment and slid it back in the bottle; reaching down into the sand she picked up the cork, stuffed it back in the opening and threw the bottle into the ocean. Making her way to the beach towel, she pulled out her phone and looked through her contacts for a number. A phone number she had not dialed in five years.