You are here: Home / Horror Stories / The Feral Nature of Werewolves, A History 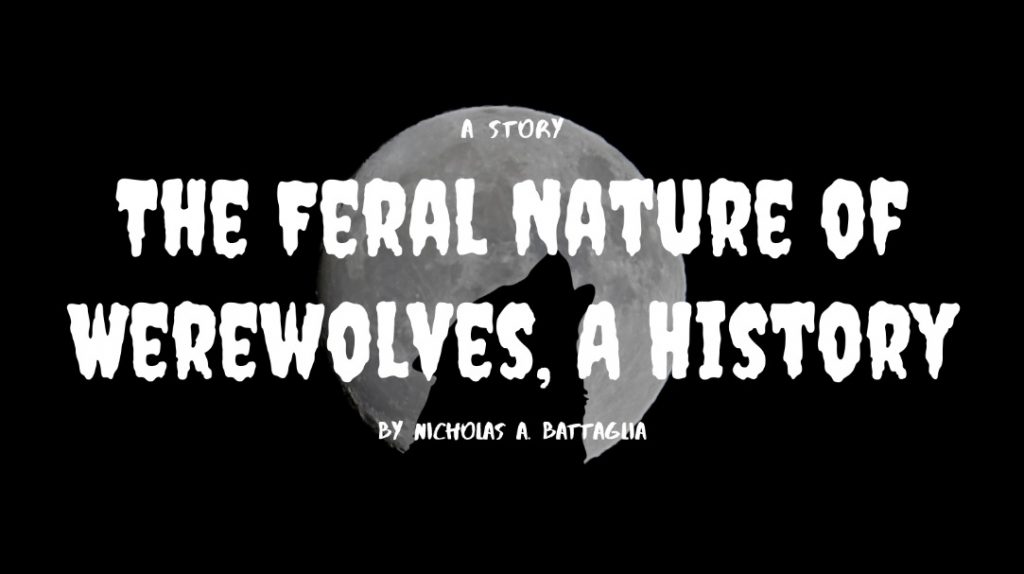 The Feral Nature of Werewolves, A History

By Nicholas A. Battaglia

Werewolves never existed. Humans created them from lore used to explain their loss of livestock at night. Humans rejected the notation that mere feral wolves could so quietly and so effectively take down and devour whole cattle in the dead of night without being detected. Rather, humans believed that a mythical monster blighted by a full moon could be the only rational explanation for this extraordinary destruction.

Acting solely on this conjured belief, villagers devised a plan to set traps during the day and arrange hunting parties at night to cull as many trapped wolves as possible before the next full moon could ripen them into their more formidable form. Many times the wolves trapped in snares or traps did not muster the strength to even fight back, while others tried to fight but were quickly overpowered and dispatched.

This continued working for decades. By reducing the number of wolves, the nighttime attacks on livestock sharply fell.

But the loss of life for the wolves was significant. They needed to evolve to protect the species. With food scarce, the wolves had to develop strength not bestowed on them at birth and sharpen their wit not normally granted to feral creatures. Rather than remain trapped in snares or traps, wolves began to naw off their own limbs to escape before the hunters returned at nightfall. The hunters would return at night to empty traps and the severed flesh of a desperate wolf—a desperate wolf that was now something more.

The feral population began to grow again, eventually returning to feed on livestock to regain strength and develop muscles atypical of any other animals species. They were now stronger after their amputations because they had to be in order to survive.

This forced a shift in the way humans hunted the hardened wolves, including using more aggressive tactics that relied on speed and surprise rather than trapping. This proved effective since many of the surviving wolves had lost a front limb and proved easy targets for the swiftness of humans on horseback.

The wolf population began to decline again, which spurred another turning point in evolution. Rather than limping away, wolves began to stand erect on their hind legs to run. Now with abnormally increased strength and sprinting on their hind legs, wolves could now evade even the most adept of hunters.

That is, until the return of the traps that were stronger and more vicious. These new traps were intended to latch onto several parts of the victim’s body and cause massive hemorrhaging before the hunters could return at night. This proved deadly effective, until the hardened wolves truly evolved into werewolves.

Now trapped in one of these hellish traps, I sit here waiting not for my own death tonight or for the ever-growing temptation to chew off my limb to escape. No, I sit here to play dead until the hunting party comes close enough to my claws to end the threat to us once and for all.

Nicholas A. Battaglia is a lawyer, business owner, and fledgling horror author haunting Albany, New York with his wife and dog.