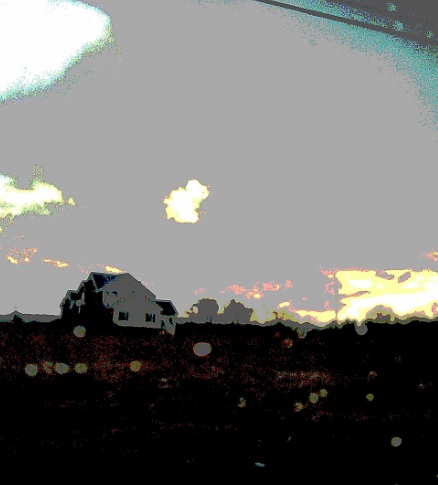 On the patio the afternoon rain had begun to fall. You could hear the drops hitting the corrugated tin roof, a pitter patter at first like cat feet but then suddenly bigger, a crashing of sound, deafening in the small room. She pulled her feet up, tucked them underneath her, reached to the table for the cigarettes—but he’d taken them. The volcanoes, usually such hard, reliable shapes, were lost now to the mist. It felt as if the lake had risen above them, risen in roiling limpid green waves right up to the lip of her window, the water proceeding on, flowing in through the many cracks in the cheap structure, falling down through the thatched palapa, flowing through her, filling her out, taking her along with it down to the mile-deep depths of the caldera’s floor, where he’d once told her the old Mayan village sat, then up, up to the peaks of Tolimán, of Atitlan. Sweeping her through the air until she was emptied out. Her foot fell asleep and she grimaced at it, kneaded it angrily with her knuckles. She did not want to lose this. She did not want to return to the room. He’d spoken to her once about Atlantean energy. Was that what she felt now, what she was reaching to regain? Rocking on the couch, rocking with the sound of the rain as the waves crashed up to her she wrapped her arms around herself, straining to hear the drums of which he’d once spoke, to hear the soothing rhythm he’d once promised her there in the violent pounding on the corrugated tin.

Zacc holds an MFA in fiction from the University of Florida, and his work has appeared in the Dead Mule School of Southern Literature and is forthcoming in the American Literary Review.