You are here: Home / Horror Contest 2016 / The Body Farm By Chelsey Zhu 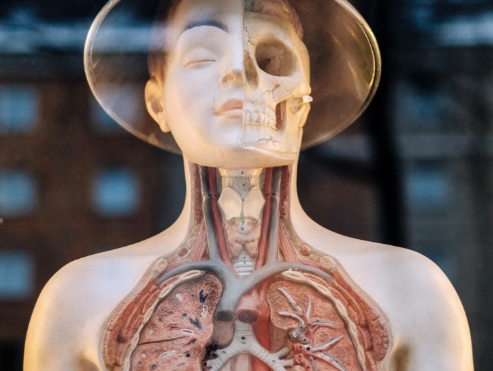 Daniel believed he had found the perfect girl. She was bright and enthusiastic, and most importantly not squeamish about his work.

“This really is fascinating, Dan,” she said as they arrived at his laboratory hand-in-hand. “What do you do here every day?”

Daniel smiled as he took out his key and twisted it into the rusted iron lock hanging from the chain-link fence. It turned with a reluctant groan, and the sound of the gate creaking open echoed in the cold night.

“It’s simple work, darling,” he explained, leading her into the silent forest. “We receive bodies, donations mostly, and we lay them out to study their decay. Then we’re able to learn more about decomposition, such as the length of the process and the physical changes to the body.”

The woman shivered, her breath painting the air an icy white. “Fascinating,” she repeated, looking curiously about her. “Where do you put the bodies?”

“All around the place, in all sorts of positions and environments. Here’s the first one now.” Daniel pointed with his flashlight to the right, exposing a corpse rotting next to a frozen puddle. The body was hardly identifiable as either male or female. Its skin was bloated and discolored, verging on a grotesque black on the arms and legs. As the couple ventured closer, they saw scores of maggots feasting on its flesh.

“It’s easy to tell how long this body has been out,” Daniel said matter-of-factly as his date looked on with horrific wonder, covering her nose from the atrocious odor pervading the air. Daniel smiled grimly as he crouched down, not at all shaken by the smell. “The abdomen is severely distended, and the skin is fragile and broken in some places, qualities of the early stages of decay.” He pointed to a bracelet wrapped tightly around the corpse’s wrist. “That tells me exactly how far along the body is. Every day I go around, take samples, and write down any notable changes.”

“It inspires me, just hearing you speak about your work,” she said admiringly as they continued on. “I can tell you have so much vigor for it.”

“There’s nothing in this world that excites me more than being here. This is my home more than any other home I’ve had, and these bodies are as much of a family as I could wish for.” Daniel chuckled darkly. “You don’t think this place is cozy?”

“Perhaps it needs a fireplace,” his darling said, smiling as she wrapped an arm around his waist. “I just wish I cherished my work the same way you do.”

“Well, my profession isn’t without its struggles,” he said, sighing. “Body donations have been rather difficult to obtain lately, and the university’s on the verge of shutting the operation down. They won’t even hire an assistant for me.”

She gazed at him with concern. “Is that why your eyes have been so dark and your skin so pale? You must be anxious and overworked!”

“Don’t worry about me, sweetheart. I’ve discovered a brilliant solution to save the body farm, but I mustn’t tell you about it until I know it’ll be successful.” Daniel embraced her from behind and nuzzled her neck, causing her to giggle.

“Well, I’m glad to hear that everything will be all right. Do you think I could ask you one more question before we leave?”

“Of course. I’m not letting you go that easily.” He began to trace his fingers along her arms.

“I know you’ve done this for a long time, but have you really gotten used to seeing dead bodies every day? It just seems a little frightening, especially in the dark.” Daniel enveloped her more tightly as she began to shiver. “Don’t you ever think about how something could happen while you’re here alone, surrounded by corpses? Don’t you— don’t you ever think that they might come to life?”

“It’s this cold night that’s making you say those things,” Daniel said as he squeezed her shoulders. “There’s nothing to be afraid of. These bodies can’t move.” He brought his hands up to caress her neck.

“Believe me, honey,” he whispered as he leaned in close, “I’m the only monster lurking in the dark.”

His hands tightened like steel traps around her throat as he held her close, his face expressionless while she struggled against him. She wheezed and gasped as his grip grew ever stronger, life fleeing from her limbs with each passing second. Gradually, her attempts to escape became weak and feeble; after a minute or so, the body was completely limp, collapsing into Daniel’s waiting arms. He held it for a moment, gazing at its form with loving eyes.

“A brilliant solution,” he said breathlessly as he carried it deeper into the forest.

The perfect spot to place the body was at the far back of the body farm, where Daniel could study the effects of direct sunlight on its decay. He methodically stripped off the clothing, whistling as he stuffed the dress and shoes inside a paper bag he had especially prepared for the occasion. He took out a marker and a spare lab bracelet from his coat, writing a brief note before carefully tying the band around its wrist.

“Body number thirty-nine,” he said as he stood, satisfied. “Day One: Fresh.”