You are here: Home / Featured / THE HOLLOW OF THE THREE HILLS by Nathaniel Hawthorne 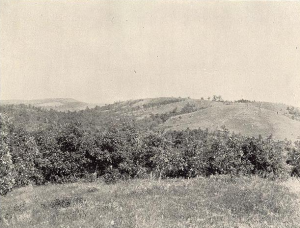 THE HOLLOW OF THE THREE HILLS

In those strange old times when fantastic dreams and madmen’s reveries were realized among the actual circumstances of life, two persons met together at an appointed hour and place. One was a lady graceful in form and fair of feature, though pale and troubled and smitten with an untimely blight in what should have been the fullest bloom of her years; the other was an ancient and meanly-dressed woman of ill-favored aspect, and so withered, shrunken and decrepit that even the space since she began to decay must have exceeded the ordinary term of human existence. In the spot where they encountered no mortal could observe them. Three little hills stood near each other, and down in the midst of them sunk a hollow basin almost mathematically circular, two or three hundred feet in breadth and of such depth that a stately cedar might but just be visible above the sides. Dwarf pines were numerous upon the hills and partly fringed the outer verge of the intermediate hollow, within which there was nothing but the brown grass of October and here and there a tree-trunk that had fallen long ago and lay mouldering with no green successor from its roots. One of these masses of decaying wood, formerly a majestic oak, rested close beside a pool of green and sluggish water at the bottom of the basin. Such scenes as this (so gray tradition tells) were once the resort of a power of evil and his plighted subjects, and here at midnight or on the dim verge of evening they were said to stand round the mantling pool disturbing its putrid waters in the performance of an impious baptismal rite. The chill beauty of an autumnal sunset was now gilding the three hill-tops, whence a paler tint stole down their sides into the hollow.

“Here is our pleasant meeting come to pass,” said the aged crone, “according as thou hast desired. Say quickly what thou wouldst have of me, for there is but a short hour that we may tarry here.”

As the old withered woman spoke a smile glimmered on her countenance like lamplight on the wall of a sepulchre. The lady trembled and cast her eyes upward to the verge of the basin, as if meditating to return with her purpose unaccomplished. But it was not so ordained.

“I am stranger in this land, as you know,” said she, at length. “Whence I come it matters not, but I have left those behind me with whom my fate was intimately bound, and from whom I am cut off for ever. There is a weight in my bosom that I cannot away with, and I have come hither to inquire of their welfare.”

“And who is there by this green pool that can bring thee news from the ends of the earth?” cried the old woman, peering into the lady’s face. “Not from my lips mayst thou hear these tidings; yet be thou bold, and the daylight shall not pass away from yonder hilltop before thy wish be granted.”

“I will do your bidding though I die,” replied the lady, desperately.

The old woman seated herself on the trunk of the fallen tree, threw aside the hood that shrouded her gray locks and beckoned her companion to draw near.

“Kneel down,” she said, “and lay your forehead on my knees.”

She hesitated a moment, but the anxiety that had long been kindling burned fiercely up within her. As she knelt down the border of her garment was dipped into the pool; she laid her forehead on the old woman’s knees, and the latter drew a cloak about the lady’s face, so that she was in darkness. Then she heard the muttered words of prayer, in the midst of which she started and would have arisen.

“Let me flee! Let me flee and hide myself, that they may not look upon me!” she cried. But, with returning recollection, she hushed herself and was still as death, for it seemed as if other voices, familiar in infancy and unforgotten through many wanderings and in all the vicissitudes of her heart and fortune, were mingling with the accents of the prayer. At first the words were faint and indistinct, not rendered so by distance, but rather resembling the dim pages of a book which we strive to read by an imperfect and gradually brightening light. In such a manner, as the prayer proceeded, did those voices strengthen upon the ear, till at length the petition ended, and the conversation of an aged man and of a woman broken and decayed like himself became distinctly audible to the lady as she knelt. But those strangers appeared not to stand in the hollow depth between the three hills. Their voices were encompassed and re-echoed by the walls of a chamber the windows of which were rattling in the breeze; the regular vibration of a clock, the crackling of a fire and the tinkling of the embers as they fell among the ashes rendered the scene almost as vivid as if painted to the eye. By a melancholy hearth sat these two old people, the man calmly despondent, the woman querulous and tearful, and their words were all of sorrow. They spoke of a daughter, a wanderer they knew not where, bearing dishonor along with her and leaving shame and affliction to bring their gray heads to the grave. They alluded also to other and more recent woe, but in the midst of their talk their voices seemed to melt into the sound of the wind sweeping mournfully among the autumn leaves; and when the lady lifted her eyes, there was she kneeling in the hollow between three hills.

“A weary and lonesome time yonder old couple have of it,” remarked the old woman, smiling in the lady’s face.

“And did you also hear them?” exclaimed she, a sense of intolerable humiliation triumphing over her agony and fear.

“Yea, and we have yet more to hear,” replied the old woman, “wherefore cover thy face quickly.”

Again the withered hag poured forth the monotonous words of a prayer that was not meant to be acceptable in heaven, and soon in the pauses of her breath strange murmurings began to thicken, gradually increasing, so as to drown and overpower the charm by which they grew. Shrieks pierced through the obscurity of sound and were succeeded by the singing of sweet female voices, which in their turn gave way to a wild roar of laughter broken suddenly by groanings and sobs, forming altogether a ghastly confusion of terror and mourning and mirth. Chains were rattling, fierce and stern voices uttered threats and the scourge resounded at their command. All these noises deepened and became substantial to the listener’s ear, till she could distinguish every soft and dreamy accent of the love-songs that died causelessly into funeral-hymns. She shuddered at the unprovoked wrath which blazed up like the spontaneous kindling of flume, and she grew faint at the fearful merriment raging miserably around her. In the midst of this wild scene, where unbound passions jostled each other in a drunken career, there was one solemn voice of a man, and a manly and melodious voice it might once have been. He went to and fro continually, and his feet sounded upon the floor. In each member of that frenzied company whose own burning thoughts had become their exclusive world he sought an auditor for the story of his individual wrong, and interpreted their laughter and tears as his reward of scorn or pity. He spoke of woman’s perfidy, of a wife who had broken her holiest vows, of a home and heart made desolate. Even as he went on, the shout, the laugh, the shriek, the sob, rose up in unison, till they changed into the hollow, fitful and uneven sound of the wind as it fought among the pine trees on those three lonely hills.

The lady looked up, and there was the withered woman smiling in her face.

“Couldst thou have thought there were such merry times in a mad-house?” inquired the latter.

“True, true!” said the lady to herself; “there is mirth within its walls, but misery, misery without.”

“There is one other voice I would fain listen to again,” replied the lady, faintly.

“Then lay down thy head speedily upon my knees, that thou mayst get thee hence before the hour be past.”

The golden skirts of day were yet lingering upon the hills, but deep shades obscured the hollow and the pool, as if sombre night wore rising thence to overspread the world. Again that evil woman began to weave her spell. Long did it proceed unanswered, till the knolling of a bell stole in among the intervals of her words like a clang that had travelled far over valley and rising ground and was just ready to die in the air. The lady shook upon her companion’s knees as she heard that boding sound. Stronger it grew, and sadder, and deepened into the tone of a death-bell, knolling dolefully from some ivy-mantled tower and bearing tidings of mortality and woe to the cottage, to the hall and to the solitary wayfarer, that all might weep for the doom appointed in turn to them. Then came a measured tread, passing slowly, slowly on, as of mourners with a coffin, their garments trailing on the ground, so that the ear could measure the length of their melancholy array. Before them went the priest, reading the burial-service, while the leaves of his book were rustling in the breeze. And though no voice but his was heard to speak aloud, still there were revilings and anathemas, whispered but distinct, from women and from men, breathed against the daughter who had wrung the aged hearts of her parents, the wife who had betrayed the trusting fondness of her husband, the mother who had sinned against natural affection and left her child to die. The sweeping sound of the funeral train faded away like a thin vapor, and the wind, that just before had seemed to shake the coffin-pall, moaned sadly round the verge of the hollow between three hills. But when the old woman stirred the kneeling lady, she lifted not her head.

“Here has been a sweet hour’s sport!” said the withered crone, chuckling to herself.