You are here: Home / Featured / The Magic Mirror by Edith Howes 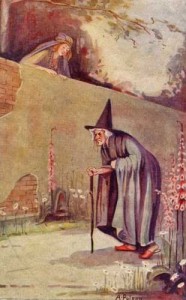 There was once a wise old king in a far-off land who said to himself, “I have a daughter as well as a son; why should she not have a kingdom too? I will see to it at once.”

He called the chief map-maker to him, and said: “Make a map of my kingdom and divide it by a line so evenly that each part shall be exactly half. There must not be one hair’s breadth more on the east of the line than on the west.”

The chief map-maker worked hard, and soon had the map ready, and it was divided so evenly that there was not a hair’s breadth more on the east of the line than on the west. Then the king made a law that when he died the Prince should rule over all the country on one side of the line, and the Princess should rule over all the country on the other side. The Prince’s land he called Eastroyal, and the Princess’s land he called Westroyal, and from that day to this there have always been kings over Eastroyal and queens over Westroyal.18
But it was soon noticed that in Eastroyal the people became discontented and quarrelsome and poor, and were always finding fault with the government; whereas in the west country over the border they were so happy and kindly that they praised each queen from the beginning of her reign to the end. Nobody knew why there should be so great a difference, but a great difference there was. Things grew worse and worse in Eastroyal, until at last the people rose and turned the reigning king off his throne and set his little son in his place. “Perhaps we shall be better satisfied now!” they said.

The new king’s mother walked alone, deep in thought; and she was very troubled. “How can I teach my little son to please his people better than his father did?” she wondered. “It would break my heart if he too angered them and lost his crown, yet already he is showing a haughty temper in his treatment of his lords, and I know not what to do.”

The Queen-mother was much startled; though she had not spoken aloud, the words seemed an answer to her thought. She looked19 over the low wall of the garden into the road. There an old woman hobbled, leaning on a stick, and muttering to herself. She was poor and ragged, and bent with age. “I know, I know!” she said again.

“What do you know?” asked the Queen-mother gently.

The old woman looked up at her. “Go to Westroyal,” she said; and she hobbled away.

“Ah, a witch!” thought the Queen-mother; “and she is right. The Queens of the West have undoubtedly some secret means of making their people love them. I will find out what it is.”

She prepared for a visit to Westroyal, and arrived a few days later at the palace of the reigning queen. Here she was welcomed and feasted and treated right lovingly, but though she kept her eyes and her ears as wide open as it was possible for eyes and ears to be, she could not discover the secret. She grew sad with disappointment.
The young queen saw that she was sorrowful. “You are not happy here. What is the matter?” she asked. “What can I do to make you glad?”20
The Queen-mother held out her hands imploringly. “Only give me your secret,” she begged. “Tell me how you gain the love of your people and keep it through all the years. Tell me so that I may teach my young son how to hold his throne?”

“Is that all?” exclaimed the Queen. “Come, I will show you.”

She led the way to her own lovely sleeping-chamber, hung with rose silk and panelled with polished silver and amethyst, and she pointed to a great mirror set strongly into the wall. “Look within!” she said.

Wonderingly, the Queen-mother obeyed. On the surface of the mirror the faces and forms of herself and the young queen were21 reflected; but after a few moments, as she gazed, these faded away, and in their places came a picture of a mine, with blackened toilers filling tracks with coal. That, too, faded, and a golden cornfield showed upon the polished glass; under the hot summer sun the busy reapers moved, wiping the sweat from their brows when they stopped a moment to rest. A third picture was of weavers making cloth. A cottage home came next, and a lordly mansion of the rich, and a homeless child seeking shelter under a city bridge. So scene followed scene, beautiful, or sad, or sordid, sometimes wild and violent, and sometimes gay and peaceful, showing in the main a people happy and content.

“What is it?” asked the amazed Queen-mother at last. “How come these pictures here?”

“They are the life of my state reflected on this magic mirror for my help,” replied the Queen. “Long ago, when the first queen came to rule the new kingdom of Westroyal, the fairies brought this mirror and set it in the wall as here you see it. Faithfully ever since it has reflected the daily happenings through-out the land, the people’s toil and pleasures,22 their dangers and their comforts and rewards. So each queen has known her country. Your son, looking in his mirror, sees but himself; I see the sufferings of my people and know what things they need, and so plainly are these pictures set before me that I cannot rest till I have used my power to give relief.”

“Oh!” cried the Queen-mother, “now I see why you are loved. How can I get such a mirror for my son?”

“That I know not,” replied the Queen.

Then the Queen-mother returned sad at heart to the kingdom of her son, pondering on what she had seen.

Once again she walked in her garden alone. “How shall I get such a mirror?” she wondered. “What should I do?”

As once before, a voice replied “I know! I know!”

The Queen-mother looked over the garden wall. Hobbling along the road was the old woman who had bade her go to Westroyal. “You who helped me before, help me again!” cried the Queen-mother. “I have obeyed you. How now shall I get a magic mirror for my son?”23
The old woman looked up at her. “Go to the Deeps,” she said, and she hobbled off.

Now this was a dreadful command to the Queen-mother, for the Deeps was a horrible black pool in the roughest and most dangerous part of the country. It was said to be formed of the country’s tears and to be also bottomless, and to be haunted by beings of strange shape. There were stories of their mysterious power and evil ways. Yet go she must, if going meant the gaining of a magic mirror for her son. And she must go alone, for only so could any seeker find the pathway to the pool, so it was said.

“I will go at once, before my courage fails,” she said, and she left her sheltered garden and set off across the land.

She had many weary miles to travel, past villages and towns and fields, and she was footsore and faint when at last she reached the winding track that led between the darkening hills. Yet on she went, following the murmur of a tiny stream that dropped through thick-set bushes into a shadowed valley. On she went still, and now the darkness came, and she had lost her way. She stumbled over fallen logs, pushed with bleeding hands and24 torn clothes through bramble wildernesses, and found at last her way again to the narrow track beside the little stream that murmured in the dark.

On she went, and down. The stream suddenly widened into a round blackness open to the sky, but walled in by jagged rocks. It was the pool. Utterly spent through weariness and fear, she sank down among the rocks to rest, and waited there for what might come to her.

Strange rustlings sounded round the rocks, strange forms loomed close beside her, strange voices asked her: “What are you? Why come you to our haunts?” Though her heart was sick with dread she answered boldly in a firm clear voice. “Give me a magic mirror for my son, that he may learn to rule.”

There was a flash, and the pool and all the rocks were lit by a light brighter and softer than that of moon or stars. All round her stood the beings who had loomed so strangely in the darkness. They were fairies, exquisite in shape and fineness, robed in flowing gossamer of many colours. They smiled at her, and touched her with their gentle hands, and immediately she was well. “Your love has2625 brought you nobly through much fear and hurt,” they said. “You shall have your due reward. Look into the Deeps.”
One took her hand and led her to the edge, and the Queen-mother, fearless and smiling now, looked down into the fathomless water of the pool. As she gazed, ripples came upon its surface. They broke away into shining cascades of diamonds and pearls, and between them appeared the face and shoulders of the old woman of the road. “I have your magic mirror,” she cried. “It is formed of the lowest teardrops of the Deeps.”

She sprang out and trod the water to the shore, and as she went her rags fell from her and she rose into the air a shining queen of fairies, more beautiful than any other there, holding in her hand a tiny gleaming mirror. “Come,” she said, “let us set it in its place.”

She touched the Queen-mother’s hand, and in a flash they were all at the palace, within the young king’s sleeping chamber of turquoise and gold. There as he lay asleep the fairies set the mirror in its place with magic words, and as it touched the wall it lengthened out and widened till it stood as large as that of the young queen across the border line.27 Over the polished glass began to float the pictures of the country’s life. “How can I show my gratitude?” the Queen-mother asked; but the fairies were gone.

Next morning when the little king awoke he ran to see the fine new mirror in his room. He gazed and gazed upon the strange entrancing pictures that came on it, and every day he spent long hours at the mirror. And as he learned to recognise the hardships and the sufferings of his people his heart grew hot to give relief, and he was no more haughty, but used his power to ease their woes. So in Eastroyal as in Westroyal there was content, and the people loved their king and praised him through all his days until the end. And all the kings who followed after him ruled wisely and were loved.