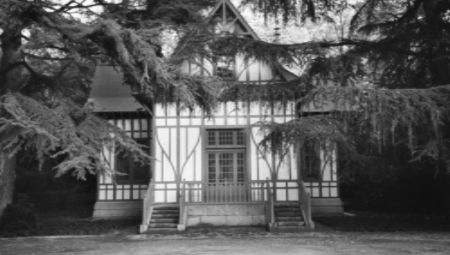 The Night Before Thanksgiving

I.
There was a sad heart in the low-storied, dark little house that stood humbly by the roadside under some tall elms. Small as her house was, old Mrs. Robb found it too large for herself alone; she only needed the kitchen and a tiny bedroom that led out of it, and there still remained the best room and a bedroom, with the low garret overhead.

There had been a time, after she was left alone, when Mrs. Robb could help those who were poorer than herself. She was strong enough not only to do a woman’s work inside her house, but almost a man’s work outside in her piece of garden ground. At last sickness and age had come hand in hand, those two relentless enemies of the poor, and together they had wasted her strength and substance. She had always been looked up to by her neighbors as being independent, but now she was left, lame-footed and lame-handed, with a debt to carry and her bare land, and the house ill-provisioned to stand the siege of time.

For a while she managed to get on, but at last it began to be whispered about that there was no use for any one so proud; it was easier for the whole town to care for her than for a few neighbors, and Mrs. Robb had better go to the poorhouse before winter, and be done with it. At this terrible suggestion her brave heart seemed to stand still. The people whom she cared for most happened to be poor, and she could no longer go into their households to make herself of use. The very elms overhead seemed to say, “Oh, no!” as they groaned in the late autumn winds, and there was something appealing even to the strange passer-by in the look of the little gray house, with Mrs. Robb’s pale, worried face at the window.

II.
Some one has said that anniversaries are days to make other people happy in, but sometimes when they come they seem to be full of shadows, and the power of giving joy to others, that inalienable right which ought to lighten the saddest heart, the most indifferent sympathy, sometimes even this seems to be withdrawn.

So poor old Mary Ann Robb sat at her window on the afternoon before Thanksgiving and felt herself poor and sorrowful indeed. Across the frozen road she looked eastward over a great stretch of cold meadow land, brown and wind-swept and crossed by icy ditches. It seemed to her as if before this, in all the troubles that she had known and carried, there had always been some hope to hold: as if she had never looked poverty full in the face and seen its cold and pitiless look before. She looked anxiously down the road, with a horrible shrinking and dread at the thought of being asked, out of pity, to join in some Thanksgiving feast, but there was nobody coming with gifts in hand. Once she had been full of love for such days, whether at home or abroad, but something chilled her very heart now.

Her nearest neighbor had been foremost of those who wished her to go to the town farm, and he had said more than once that it was the only sensible thing. But John Mander was waiting impatiently to get her tiny farm into his own hands; he had advanced some money upon it in her extremity, and pretended that there was still a debt, after he cleared her wood lot to pay himself back. He would plough over the graves in the field corner and fell the great elms, and waited now like a spider for his poor prey. He often reproached her for being too generous to worthless people in the past and coming to be a charge to others now. Oh, if she could only die in her own house and not suffer the pain of homelessness and dependence!

It was just at sunset, and as she looked out hopelessly across the gray fields, there was a sudden gleam of light far away on the low hills beyond; the clouds opened in the west and let the sunshine through. One lovely gleam shot swift as an arrow and brightened a far cold hillside where it fell, and at the same moment a sudden gleam of hope brightened the winter landscape of her heart.

“There was Johnny Harris,” said Mary Ann Robb softly. “He was a soldier’s son, left an orphan and distressed. Old John Mander scolded, but I could n’t see the poor boy in want. I kept him that year after he got hurt, spite o’ what anybody said, an’ he helped me what little he could. He said I was the only mother he ‘d ever had. ‘I ‘m goin’ out West, Mother Robb,’ says he. ‘I sha’n’t come back till I get rich,’ an’ then he ‘d look at me an’ laugh, so pleasant and boyish. He wa’n’t one that liked to write. I don’t think he was doin’ very well when I heard, here, it’s most four years ago now. I always thought if he got sick or anything, I should have a good home for him to come to. There ‘s poor Ezra Blake, the deaf one, too he on’t have any place to welcome him.”

The light faded out of doors, and again Mrs. Robb’s troubles stood before her. Yet it was not so dark as it had been in her sad heart. She still sat by the window, hoping now, in spite of herself, instead of fearing; and a curious feeling of nearness and expectancy made her feel not so much light-hearted as light-headed.

“I feel just as if somethin’ was goin’ to happen,” she said. “Poor
Johnny Harris, perhaps he’s thinkin’ o’ me, if he’s alive.”
It was dark now out of doors, and there were tiny clicks against the window. It was beginning to snow, and the great elms creaked in the rising wind overhead.

III.
A dead limb of one of the old trees had fallen that autumn, and, poor firewood as it might be, it was Mrs. Robb’s own, and she had burnt it most thankfully. There was only a small armful left, but at least she could have the luxury of a fire. She had a feeling that it was her last night at home, and with strange recklessness began to fill the stove as she used to do in better days.

The snow clicked faster and faster against the window, and she sat alone thinking in the dark.

“There ‘s lots of folks I love,” she said once. “They ‘d be sorry I ain’t got nobody to come, an’ no supper the night afore Thanksgivin’. I ‘m dreadful glad they don’t know.” And she drew a little nearer to the fire, and laid her head back drowsily in the old rocking-chair.

It seemed only a moment before there was a loud knocking, and somebody lifted the latch of the door. The fire shone bright through the front of the stove and made a little light in the room, but Mary Ann Robb waked up frightened and bewildered.

“Who ‘s there?” she called, as she found her crutch and went to the door. She was only conscious of her one great fear. “They ‘ve come to take me to the poor-house!” she said, and burst into tears.

There was a tall man, not John Mander, who seemed to fill the narrow doorway.

Yes, and this was the man who kept the poorhouse, and she would go without complaint; they might have given her notice, but she must not fret.

“Sit down, sir,” she said, turning toward him with touching patience. “You ‘ll have to give me a little time. If I ‘d been notified I would n’t have kept you waiting a minute this stormy night.”

It was not the keeper of the poorhouse. The man by the door took one step forward and put his arm round her and kissed her.

“What are you talking about?” said John Harris. “You ain’t goin’ to make me feel like a stranger? I ‘ve come all the way from Dakota to spend Thanksgivin’. There’s all sorts o’ things out here in the wagon, an’ a man to help get ’em in. Why, don’t cry so, Mother Robb. I thought you ‘d have a great laugh, if I come and surprised you. Don’t you remember I always said I should come?”

It was John Harris, indeed. The poor soul could say nothing. She felt now as if her heart was going to break with joy. He left her in the rocking-chair and came and went in his old boyish way, bringing in the store of gifts and provisions. It was better than any dream. He laughed and talked, and went out to send away the man to bring a wagonful of wood from John Mander’s, and came in himself laden with pieces of the nearest fence to keep the fire going in the mean time. They must cook the beef-steak for supper right away; they must find the pound of tea among all the other bundles; they must get good fires started in both the cold bedrooms. Why, Mother Robb did n’t seem to be ready for company from out West! The great, cheerful fellow hurried about the tiny house, and the little old woman limped after him, forgetting everything but hospitality. Had not she a house for John to come to? Were not her old chairs and tables in their places still? And he remembered everything, and kissed her as they stood before the fire, as if she were a girl.

He had found plenty of hard times, but luck had come at last. He had struck luck, and this was the end of a great year.

“No, I could n’t seem to write letters; no use to complain o’ the worst, an’ I wanted to tell you the best when I came;” and he told it while she cooked the supper. “No, I wa’n’t goin’ to write no foolish letters,” John repeated. He was afraid he should cry himself when he found out how bad things had been; and they sat down to supper together, just as they used to do when he was a homeless orphan boy, whom nobody else wanted in winter weather while he was crippled and could not work. She could not be kinder now than she was then, but she looked so poor and old! He saw her taste her cup of tea and set it down again with a trembling hand and a look at him. “No, I wanted to come myself,” he blustered, wiping his eyes and trying to laugh. “And you ‘re going to have everything you need to make you comfortable long’s you live, Mother Robb!”

She looked at him again and nodded, but she did not even try to speak. There was a good hot supper ready, and a happy guest had come; it was the night before Thanksgiving.