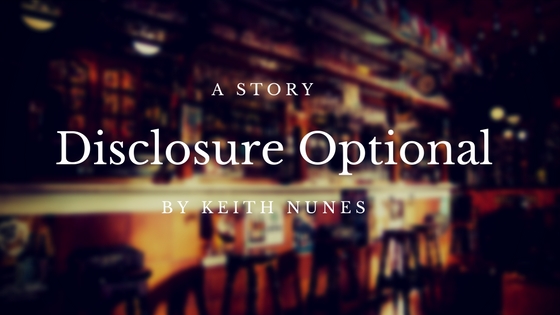 A middle-aged guy in a dark jacket and a patterned shirt sitting at a bar, a woman of a similar age in a deep purple dress walks over and sits next to him.

She says peering into him, red lipstick glistening: “What are you drinking?”

He says glancing and glancing again: “I buy my own drinks, but thanks.”

“Waiting for someone, something?”

“Just the next cliché.”

He says, holding her eyes in his and then looking back at his drink: “Hey, look sorry I’m just flowing along nicely in my own miserable little river of self-pity and you don’t need this.”

“Best not tell me what I need.”

“Yeah, well, don’t we all need the same things?”

“I’ve had the same things for way too long.”

“That caught me out,” he says, “I’d forgotten what it’s like to be surprised.”

“I surprised myself, not often I feel I can be honest around a man without setting off a booby-trap.”

Hands around his drink: “Lately I’ve been told I’m no man at all so I guess you’re still not really being honest around a man.”

She smiles and runs her hand through her mink-coloured hair.

He smiles, glances at her and away: “I feel like telling you my name now … how do you feel about that?”

“Well, if you prefer make it a pseudonym.”

“The name on my birth certificate says Jacob.”

“They’ve been calling me bitch for a while but I prefer Tess.”

They sit quietly, Herbie Hancock jazz drifting through the bar.

“I write for a struggling magazine and I’m not of any great use as a functioning male role model, this is my first drink in five years and I’m not enjoying it, I was hoping to spiral down rapidly … sort of make a decision without making a decision, that’s me.”

“I’m an Olympic fencer and I stab people in the back.”

“My wife is waiting too, waiting for me to either focus on the marriage or leave, ‘just fucking make up your mind’.”

The woman is covered in a wry smile as she steps off the stool beside him: “So my lovely husband, are you coming home?”

He eases onto his feet, kisses her cheek, takes her arm and they leave with more than a hint of swing.

Keith Nunes is from New Zealand. His stories have been published around the globe. He has been nominated for The Pushcart Prize.