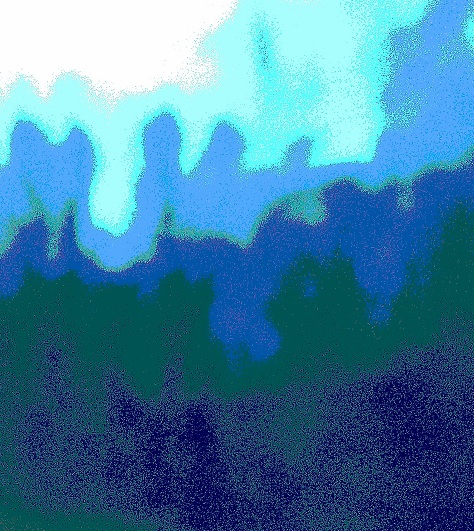 It was thick; the thickest, swirliest fog she’d ever seen, here on this back-road through backwoods North Dakota. Joyce cursed the impulse that had brought her to it; wished fervently she’d kept to the highway; not attempted the shortcut to the interstate, the one that would carry her along a new path, a new string of destinations.

Or at least I might have saved it for morning, she pondered ruefully as she crawled along, her headlights barely piercing the veil of low cloud that cloaked the asphalt. All at once the lights grew brighter, more colorful; red and blue mixed with the white, illuminating her path even as she was forced to abandon it.

She parked and sat; turned off the engine. Strained for the glovebox so she would be ready with the answers to the now-routine questions.

“Here they are, officer.” He raised his flashlight and looked them over, as they always did, comparing the image on the out-of-state license to the young woman in the rusty van that pre-dated her.

“There’s no insurance information on your registration, Miss.”

She was prepared for that one, too. “In my state it isn’t printed on there; you get a separate card. See, here?” She handed it over and he examined it skeptically.

She cleared her throat. “Could you tell me why you pulled me over, officer? I certainly wasn’t speeding,” she chuckled with affected amusement.

He gazed steadily back at her from beneath his broad-brimmed hat, his expression impossible to read in the misty glare of his flash. “I’ll be right back.”

“Is that taillight out again?” she queried anxiously when he returned. “I got pulled over for that a while ago but I had it fixed right away…”

“I stopped you because you crossed the fog line,” he interrupted.

“That white line on the edge of the road,” he explained. “That’s what it’s called.”

He leaned on the edge of her window. “This is a pretty unusual vehicle you’ve got here,” he remarked.

“It’s a ’69 Dodge,” she replied enthusiastically. “You don’t see many of them on the road these days.”

“That you don’t,” he agreed, shaking his head incredulously. “Where you headed, Miss?”

“Just passing through,” she countered vaguely. “I was planning on picking up the interstate up ahead.”

“Think you can find it okay?” he queried, returning her papers with a flourish.

“Sure!” she exclaimed, relieved that the ordeal was nearly over. “I’ll be more careful… of the fog line, I mean.”

“Well, to be perfectly frank with you, Miss… I mean, you did cross the line a bit, but mostly I pulled you over because… Well, I just wanted to see what you looked like.”

And with that he tipped his cap, patted the van’s door in a friendly fashion, and vanished into the impenetrable fog of the Dakota night.

###
Lori Schafer’s flash fiction, short stories, and essays have appeared in numerous print and online publications, and she is currently at work on her third novel. Her memoir, On Hearing of My Mother’s Death Six Years After It Happened: A Daughter’s Memoir of Mental Illness, is being released in October 2014. You can find out more about Lori and her forthcoming projects by visiting her website at http://lorilschafer.blogspot.com/.