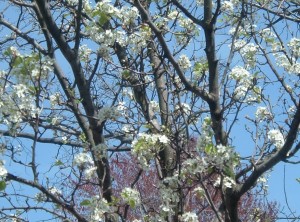 Each spring, the urge to plant something—a flower or vegetable or anything that would blossom and produce—pulled at her. It must have been a legacy from her grandmother who had, long ago, kept a garden of small and neat proportions.

There had been cabbage-sized roses and delicate white pea blossoms. And in the fertile earth hid golden carrot spears and round white onions, layered and pearly.

The garden gave forth its best from early spring, when the frost still powdered the ground, until late autumn amidst the flaming leaves. And Alice came to believe her grandmother had found the secret to life itself buried deep in the soft black earth.

There had been space and light for things to grow at her grandmother’s house—unlike here in the city where even weeds had a difficult time breaking through the ever-present asphalt.

There was no place for Alice to grow even a single flower—not in front of the brownstone building, where angled cracks only hinted at the earth below, not inside her small dark apartment where the life-giving sunlight would have to traverse an impossibly long distance just to reach her grimy windows.

She had tried, that first year she had come to the city, when hope blossomed in her heart and the future seemed filled with promise. She had carried to her rooms a red clay pot of patio tomatoes, guaranteed to produce scarlet globes hanging in abundance from the dark green stems.

But the lack of sunlight and fresh air turned the green to faded brown, and by summer’s end, the tomatoes themselves were shriveled and misshapen—a nightmare version of what nature intended.

Alice threw the plant away, and never brought home another. Instead, every spring, when the desire for life burned in her, she would stop at the flower sellers waiting patiently outside the subway entrance and buy armfuls of freesias and roses and carnations.

Tenderly, she would carry the paper-wrapped bundle home, to arrange the fragrant rootless blossoms in a crystal vase to die.

###
Nancy Christie has been published in Hypertext, Wanderings, The Chaffin Journal, Fiction 365, Full of Crow, Red Fez and Xtreme. She is also the author of two short fiction e-books published by Pixel Hall Press—ANNABELLE and ALICE IN WONDERLAND—and the forthcoming fiction collection, TRAVELING LEFT OF CENTER (to be published Fall 2014, also by Pixel Hall Press) as well as the inspirational book, THE GIFTS OF CHANGE (Beyond Words Publishing/Atria).