You are here: Home / Horror Stories / The Birds Weep by Steve Carr 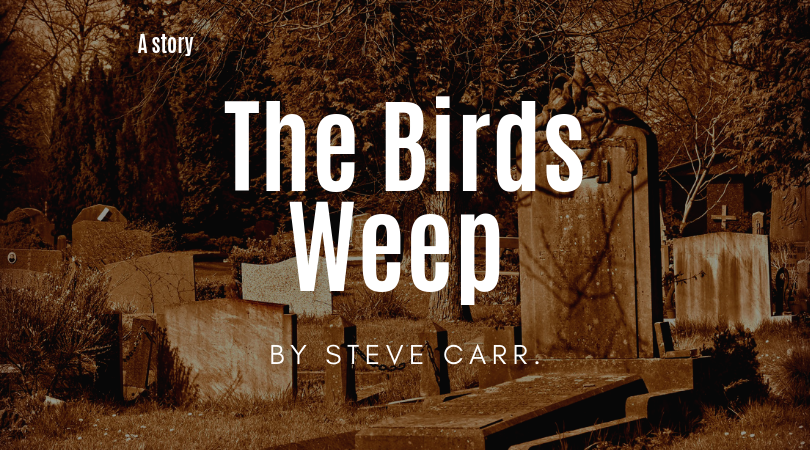 The air is thick with the scent of pine. Rays of purple, blood red and golden yellow are fanned out across the twilight sky. Kyle walks among the trees holding a bouquet of wilting lilies. Lost, he searches for signs of the path he wandered away from. As the sun sets, owls hoot from their perches and hawks screech as they circle about in the oncoming night sky.

At a fallen pine tree he sits on a branch and tries to remember the direction he was going. He puts the flowers to his nose. They have lost their scent. He watches the sparrows, juncos and blackbirds as they fight the cold wind on the way to their nests. The cry of a loon from a nearby lake reverberates through the forest. It gives him a sense of direction. The lake is near his destination.

Night sets in fast. The black sky is suddenly splattered with clusters of stars. The coos of mourning doves fills the air. He walks on, sensing he is now on the right track. When he reaches a clearing among a grove of sycamore trees he stops and gazes at the small group of cemetery headstones surrounded by a black fence.

He passes through the fence and finds his grave. He lays the lilies on the mound above his coffin. As he slowly disappears into the earth he knows that was the last time he would wander the Earth. He heard the birds weep.

Steve Carr, who lives in Richmond, Va., began his writing career as a military journalist and has had over 280 short stories published internationally in print and online magazines, literary journals and anthologies since June, 2016. He has two collections of short stories, Sand and Rain, that have been published by Clarendon House Publications. His third collection of short stories, Heat, was published by Czykmate Productions. His YA collection of stories, The Tales of Talker Knock was published by Clarendon House Publications. His plays have been produced in several states in the U.S. He has been nominated for a Pushcart Prize twice. His Twitter is @carrsteven960. His website is https://www.stevecarr960.com/ He is on Facebook: https://www.facebook.com/steven.carr.35977