You are here: Home / Featured / The Ferry of Unfulfilment by O.Henry 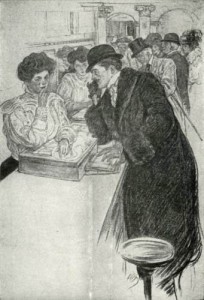 The Ferry of Unfulfilment

At the street corner, as solid as granite in the “rush-hour” tide of humanity, stood the Man from Nome. The Arctic winds and sun had stained him berry-brown. His eye still held the azure glint of the glaciers.

He was as alert as a fox, as tough as a caribou cutlet and as broad-gauged as the aurora borealis. He stood sprayed by a Niagara of sound?the crash of the elevated trains, clanging cars, pounding of rubberless tires and the antiphony of the cab and truck-drivers indulging in scarifying repartee. And so, with his gold dust cashed in to the merry air of a hundred thousand, and with the cakes and ale of one week in Gotham turning bitter on his tongue, the Man from Nome sighed to set foot again in Chilkoot, the exit from the land of street noises and Dead Sea apple pies.

Up Sixth avenue, with the tripping, scurrying, chattering, bright-eyed, homing tide came the Girl from Sieber-Mason’s. The Man from Nome looked and saw, first, that she was supremely beautiful after his own conception of beauty; and next, that she moved with exactly the steady grace of a dog sled on a level crust of snow. His third sensation was an instantaneous conviction that he desired her greatly for his own. This quickly do men from Nome make up their minds. Besides, he was going back to the North in a short time, and to act quickly was no less necessary.

A thousand girls from the great department store of Sieber-Mason flowed along the sidewalk, making navigation dangerous to men whose feminine field of vision for three years has been chiefly limited to Siwash and Chilkat squaws. But the Man from Nome, loyal to her who had resurrected his long cached heart, plunged into the stream of pulchritude and followed her.

Down Twenty-third street she glided swiftly, looking to neither side; no more flirtatious than the bronze Diana above the Garden. Her fine brown hair was neatly braided; her neat waist and unwrinkled black skirt were eloquent of the double virtues?taste and economy. Ten yards behind followed the smitten Man from Nome.

Miss Claribel Colby, the Girl from Sieber-Mason’s, belonged to that sad company of mariners known as Jersey commuters. She walked into the waiting-room of the ferry, and up the stairs, and by a marvellous swift, little run, caught the ferry-boat that was just going out. The Man from Nome closed up his ten yards in three jumps and gained the deck close beside her.

Miss Colby chose a rather lonely seat on the outside of the upper-cabin. The night was not cold, and she desired to be away from the curious eyes and tedious voices of the passengers. Besides, she was extremely weary and drooping from lack of sleep. On the previous night she had graced the annual ball and oyster fry of the West Side Wholesale Fish Dealers’ Assistants’ Social Club No. 2, thus reducing her usual time of sleep to only three hours.

And the day had been uncommonly troublous. Customers had been inordinately trying; the buyer in her department had scolded her roundly for letting her stock run down; her best friend, Mamie Tuthill, had snubbed her by going to lunch with that Dockery girl.

The Girl from Sieber-Mason’s was in that relaxed, softened mood that often comes to the independent feminine wage-earner. It is a mood most propitious for the man who would woo her. Then she has yearnings to be set in some home and heart; to be comforted, and to hide behind some strong arm and rest, rest. But Miss Claribel Colby was also very sleepy.

There came to her side a strong man, browned and dressed carelessly in the best of clothes, with his hat in his hand.

“Lady,” said the Man from Nome, respectfully, “excuse me for speaking to you, but I?I?I saw you on the street, and?and?”

“Oh, gee!” remarked the Girl from Sieber-Mason’s, glancing up with the most capable coolness. “Ain’t there any way to ever get rid of you mashers? I’ve tried everything from eating onions to using hatpins. Be on your way, Freddie.”

“I’m not one of that kind, lady,” said the Man from Nome?”honest, I’m not. As I say, I saw you on the street, and I wanted to know you so bad I couldn’t help followin’ after you. I was afraid I wouldn’t ever see you again in this big town unless I spoke; and that’s why I done so.”

Miss Colby looked once shrewdly at him in the dim light on the ferry-boat. No; he did not have the perfidious smirk or the brazen swagger of the lady-killer. Sincerity and modesty shone through his boreal tan. It seemed to her that it might be good to hear a little of what he had to say.

“You may sit down,” she said, laying her hand over a yawn with ostentatious politness; “and?mind?don’t get fresh or I’ll call the steward.”

The Man from Nome sat by her side. He admired her greatly. He more than admired her. She had exactly the looks he had tried so long in vain to find in a woman. Could she ever come to like him? Well, that was to be seen. He must do all in his power to stake his claim, anyhow.

“Are you real sure it ain’t Jones?” asked the girl, leaning toward him, with delicious, knowing raillery.

“I’m down from Nome,” he went on with anxious seriousness. “I scraped together a pretty good lot of dust up there, and brought it down with me.”

“Oh, say!” she rippled, pursuing persiflage with engaging lightness, “then you must be on the White Wings force. I thought I’d seen you somewhere.”

“You didn’t see me on the street to-day when I saw you.”

“I never look at fellows on the street.”

“Well, I looked at you; and I never looked at anything before that I thought was half as pretty.”

“Shall I keep the change?”

“Yes, I reckon so. I reckon you could keep anything I’ve got. I reckon I’m what you would call a rough man, but I could be awful good to anybody I liked. I’ve had a rough time of it up yonder, but I beat the game. Nearly 5,000 ounces of dust was what I cleaned up while I was there.”

“Goodness!” exclaimed Miss Colby, obligingly sympathetic. “It must be an awful dirty place, wherever it is.”

And then her eyes closed. The voice of the Man from Nome had a monotony in its very earnestness. Besides, what dull talk was this of brooms and sweeping and dust? She leaned her head back against the wall.

“Miss,” said the Man from Nome, with deeper earnestness and monotony, “I never saw anybody I liked as well as I do you. I know you can’t think that way of me right yet; but can’t you give me a chance? Won’t you let me know you, and see if I can’t make you like me?”

The head of the Girl from Sieber-Mason’s slid over gently and rested upon his shoulder. Sweet sleep had won her, and she was dreaming rapturously of the Wholesale Fish Dealers’ Assistants’ ball.

The gentleman from Nome kept his arms to himself. He did not suspect sleep, and yet he was too wise to attribute the movement to surrender. He was greatly and blissfully thrilled, but he ended by regarding the head upon his shoulder as an encouraging preliminary, merely advanced as a harbinger of his success, and not to be taken advantage of.

One small speck of alloy discounted the gold of his satisfaction. Had he spoken too freely of his wealth? He wanted to be liked for himself.

“I want to say, Miss,” he said, “that you can count on me. They know me in the Klondike from Juneau to Circle City and down the whole length of the Yukon. Many a night I’ve laid in the snow up there where I worked like a slave for three years, and wondered if I’d ever have anybody to like me. I didn’t want all that dust just myself. I thought I’d meet just the right one some time, and I done it to-day. Money’s a mighty good thing to have, but to have the love of the one you like best is better still. If you was ever to marry a man, Miss, which would you rather he’d have?”

The word came sharply and loudly from Miss Colby’s lips, giving evidence that in her dreams she was now behind her counter in the great department store of Sieber-Mason.

Her head suddenly bobbed over sideways. She awoke, sat straight, and rubbed her eyes. The Man from Nome was gone.

“Gee! I believe I’ve been asleep,” said Miss Colby “Wonder what became of the White Wings!”