You are here: Home / The Horrible by Guy de Maupassant 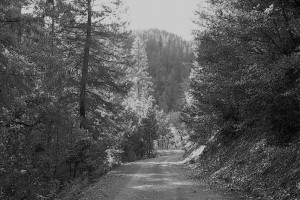 The shadows of a balmy night were slowly falling. The women remained in the drawing-room of the villa. The men, seated, or astride of garden chairs, were smoking outside the door of the house, around a table laden with cups and liqueur glasses.

Their lighted cigars shone like eyes in the darkness, which was gradually becoming more dense. They had been talking about a frightful accident which had occurred the night before, two men and three women drowned in the river before the eyes of the guests.

“Yes, these things are affecting, but they are not horrible.

“Horrible, that well-known word, means much more than terrible. A frightful accident like this affects, upsets, terrifies; it does not horrify. In order that we should experience horror, something more is needed than emotion, something more than the spectacle of a dreadful death; there must be a shuddering sense of mystery, or a sensation of abnormal terror, more than natural. A man who dies, even under the most tragic circumstances, does not excite horror; a field of battle is not horrible; blood is not horrible; the vilest crimes are rarely horrible.

“Here are two personal examples which have shown me what is the meaning of horror.

“It was during the war of 1870. We were retreating toward Pont-Audemer, after having passed through Rouen. The army, consisting of about twenty thousand men, twenty thousand routed men, disbanded, demoralized, exhausted, were going to disband at Havre.

“The earth was covered with snow. The night was falling. They had not eaten anything since the day before. They were fleeing rapidly, the Prussians not being far off.

“All the Norman country, sombre, dotted with the shadows of the trees surrounding the farms, stretched out beneath a black, heavy, threatening sky.

“Nothing else could be heard in the wan twilight but the confused sound, undefined though rapid, of a marching throng, an endless tramping, mingled with the vague clink of tin bowls or swords. The men, bent, round-shouldered, dirty, in many cases even in rags, dragged themselves along, hurried through the snow, with a long, broken-backed stride.

“The skin of their hands froze to the butt ends of their muskets, for it was freezing hard that night. I frequently saw a little soldier take off his shoes in order to walk barefoot, as his shoes hurt his weary feet; and at every step he left a track of blood. Then, after some time, he would sit down in a field for a few minutes’ rest, and he never got up again. Every man who sat down was a dead man.

“Should we have left behind us those poor, exhausted soldiers, who fondly counted on being able to start afresh as soon as they had somewhat refreshed their stiffened legs? But scarcely had they ceased to move, and to make their almost frozen blood circulate in their veins, than an unconquerable torpor congealed them, nailed them to the ground, closed their eyes, and paralyzed in one second this overworked human mechanism. And they gradually sank down, their foreheads on their knees, without, however, falling over, for their loins and their limbs became as hard and immovable as wood, impossible to bend or to stand upright.

“And the rest of us, more robust, kept straggling on, chilled to the marrow, advancing by a kind of inertia through the night, through the snow, through that cold and deadly country, crushed by pain, by defeat, by despair, above all overcome by the abominable sensation of abandonment, of the end, of death, of nothingness.

“They were looking for an officer, believing that they had caught a spy. The word ‘spy’ at once spread through the midst of the stragglers, and they gathered in a group round the prisoner. A voice exclaimed: ‘He must be shot!’ And all these soldiers who were falling from utter prostration, only holding themselves on their feet by leaning on their guns, felt all of a sudden that thrill of furious and bestial anger which urges on a mob to massacre.

“I wanted to speak. I was at that time in command of a battalion; but they no longer recognized the authority of their commanding officers; they would even have shot me.

“One of the gendarmes said: ‘He has been following us for the three last days. He has been asking information from every one about the artillery.'”

I took it on myself to question this person.

“What are you doing? What do you want? Why are you accompanying the army?”

“He stammered out some words in some unintelligible dialect. He was, indeed, a strange being, with narrow shoulders, a sly look, and such an agitated air in my presence that I really no longer doubted that he was a spy. He seemed very aged and feeble. He kept looking at me from under his eyes with a humble, stupid, crafty air.

“The men all round us exclaimed.

“I said to the gendarmes:

“‘Will you be responsible for the prisoner?’

“I had not ceased speaking when a terrible shove threw me on my back, and in a second I saw the man seized by the furious soldiers, thrown down, struck, dragged along the side of the road, and flung against a tree. He fell in the snow, nearly dead already.

“And immediately they shot him. The soldiers fired at him, reloaded their guns, fired again with the desperate energy of brutes. They fought with each other to have a shot at him, filed off in front of the corpse, and kept on firing at him, as people at a funeral keep sprinkling holy water in front of a coffin.

“And all along the horizon I heard the great noise of this panic-stricken army in full flight.

“A panic, the result of these shots fired at this vagabond, had filled his very executioners with terror; and, without realizing that they were themselves the originators of the scare, they fled and disappeared in the darkness.

“I remained alone with the corpse, except for the two gendarmes whose duty compelled them to stay with me.

“They lifted up the riddled mass of bruised and bleeding flesh.

“‘He must be searched,’ I said. And I handed them a box of taper matches which I had in my pocket. One of the soldiers had another box. I was standing between the two.

“The gendarme who was examining the body announced:

“‘Clothed in a blue blouse, a white shirt, trousers, and a pair of shoes.’

“The first match went out; we lighted a second. The man continued, as he turned out his pockets:

“‘A horn-handled pocketknife, check handkerchief, a snuffbox, a bit of pack thread, a piece of bread.’

“The second match went out; we lighted a third. The gendarme, after having felt the corpse for a long time, said:

“‘Strip him. We shall perhaps find something next his skin.”

“And in order that the two soldiers might help each other in this task, I stood between them to hold the lighted match. By the rapid and speedily extinguished flame of the match, I saw them take off the garments one by one, and expose to view that bleeding bundle of flesh, still warm, though lifeless.

“And suddenly one of them exclaimed:

“I cannot describe to you the strange and poignant sensation of pain that moved my heart. I could not believe it, and I knelt down in the snow before this shapeless pulp of flesh to see for myself: it was a woman.

“The two gendarmes, speechless and stunned, waited for me to give my opinion on the matter. But I did not know what to think, what theory to adopt.

“Then the brigadier slowly drawled out:

“‘Perhaps she came to look for a son of hers in the artillery, whom she had not heard from.’

“And the other chimed in:

“I had the same sensation last year, while interrogating one of the survivors of the Flatters Mission, an Algerian sharpshooter.

“You know the details of that atrocious drama. It is possible, however, that you are unacquainted with one of them.

“The colonel travelled through the desert into the Soudan, and passed through the immense territory of the Touaregs, who, in that great ocean of sand which stretches from the Atlantic to Egypt and from the Soudan to Algeria, are a kind of pirates, resembling those who ravaged the seas in former days.

“The guides who accompanied the column belonged to the tribe of the Chambaa, of Ouargla.

“Now, one day we encamped in the middle of the desert, and the Arabs declared that, as the spring was still some distance away, they would go with all their camels to look for water.

“One man alone warned the colonel that he had been betrayed. Flatters did not believe this, and accompanied the convoy with the engineers, the doctors, and nearly all his officers.

“They were massacred round the spring, and all the camels were captured.

“The captain of the Arab Intelligence Department at Ouargla, who had remained in the camp, took command of the survivors, spahis and sharpshooters, and they began to retreat, leaving behind them the baggage and provisions, for want of camels to carry them.

“Then they started on their journey through this solitude without shade and boundless, beneath the devouring sun, which burned them from morning till night.

“One tribe came to tender its submission and brought dates as a tribute. The dates were poisoned. Nearly all the Frenchmen died, and, among them, the last officer.

“There now only remained a few spahis with their quartermaster, Pobeguin, and some native sharpshooters of the Chambaa tribe. They had still two camels left. They disappeared one night, along with two, Arabs.

“Then the survivors understood that they would be obliged to eat each other, and as soon as they discovered the flight of the two men with the two camels, those who remained separated, and proceeded to march, one by one, through the soft sand, under the glare of a scorching sun, at a distance of more than a gunshot from each other.

“So they went on all day, and when they reached a spring each of them came to drink at it in turn, as soon as each solitary marcher had moved forward the number of yards arranged upon. And thus they continued marching the whole day, raising everywhere they passed, in that level, burnt up expanse, those little columns of dust which, from a distance, indicate those who are trudging through the desert.

“But one morning one of the travellers suddenly turned round and approached the man behind him. And they all stopped to look.

“The man toward whom the famished soldier drew near did not flee, but lay flat on the ground, and took aim at the one who was coming toward him. When he believed he was within gunshot, he fired. The other was not hit, and he continued then to advance, and levelling his gun, in turn, he killed his comrade.

“Then from all directions the others rushed to seek their share. And he who had killed the fallen man, cutting the corpse into pieces, distributed it.

“And they once more placed themselves at fixed distances, these irreconcilable allies, preparing for the next murder which would bring them together.

“For two days they lived on this human flesh which they divided between them. Then, becoming famished again, he who had killed the first man began killing afresh. And again, like a butcher, he cut up the corpse and offered it to his comrades, keeping only his own portion of it.

“And so this retreat of cannibals continued.

“The last Frenchman, Pobeguin, was massacred at the side of a well, the very night before the supplies arrived.

“Do you understand now what I mean by the horrible?”

This was the story told us a few nights ago by General de G?.