You are here: Home / Classic Short Story / THE UNWRAPPING OF A MUMMY by THOPHILE GAUTIER 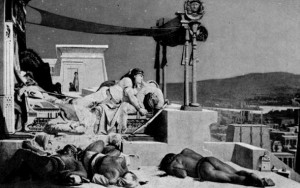 EGYPT
THE UNWRAPPING OF A MUMMY by THOPHILE GAUTIER

During the Exhibition of 1857, I was invited to be present at the opening of one of the mummy cases in the collection of Egyptian antiquities, and at the unwrapping of the mummy it contained. My curiosity was indeed lively. My readers will easily understand the reason: the scene at which I was to be present I had imagined and described beforehand in the “Romance of a Mummy.” I do not say this to draw attention to my book, but to explain the peculiar interest I took in this archological and funereal meeting.

When I entered the room, the mummy, already taken from the case, was laid on a table, its human shape showing indistinctly through the thickness of the wrappings. On the faces of the coffin was painted the Judgment of the Soul, the scene which is usually represented in such cases. The soul of the dead woman, led by two funeral genii, the one hostile, the other favourable, was bowing before Osiris, the great judge of the dead, seated on his throne, wearing the pschent, the conventional beard on the chin, and a whip in his hand. Farther on, the dead woman’s actions, good or bad, represented by a pot of flowers and a rough piece of stone, were being weighed in scales. A long line of judges, with heads of lions, hawks, or jackals, were awaiting in hieratic attitudes the result of the weighing before delivering judgment. Below this painting were inscribed the prayers of the funeral ritual and the confession of the dead, who did not own to her faults, but stated, on the contrary, those she had not committed, “I have not been guilty of murder, or of theft, or of adultery,” etc. Another inscription contained the genealogy of the woman, both on the father’s and on the mother’s side. I do not transcribe here the series of strange names, the last of which is that of Nes Khons, the lady enclosed in the case, where she believed herself sure of rest while awaiting the day on which her soul would, after many trials, be reunited to its well-preserved body, and enjoy supreme felicity with its own flesh and blood; a broken hope, for death is as disappointing as life.

The work of unrolling the bandages began; the outer envelope, of stout linen, was ripped open with scissors. A faint, delicate odour of balsam, incense, and other aromatic drugs spread through the room like the odour of an apothecary’s shop. The end of the bandage was then sought for, and when found, the mummy was placed upright to allow the operator to move freely around her and to roll up the endless band, turned to the yellow colour of cru linen by the palm wine and other preserving liquids.

Strange indeed was the appearance of the tall rag-doll, the armature of which was a dead body, moving so stiffly and awkwardly with a sort of horrible parody of life, under the hands that were stripping it, while the bandages rose in heaps around it. Sometimes the bandages held in place pieces of stuff like fringed serviettes intended to fill hollows or to support the shape.

Pieces of linen, cut open in the middle, had been passed over the head and, fitted to the shoulders, fell down over the chest. All these obstacles having been removed, there appeared a sort of veil like coarse India muslin, of a pinkish colour, the soft tone of which would have delighted a painter. It appears to me that the dye must have been anatto, unless the muslin, originally red, turned rose-colour through the action of the balsam and of time. Under the veil there was another series of bandages, of finer linen, which bound the body more closely with their innumerable folds. Our curiosity was becoming feverish, and the mummy was being turned somewhat quickly. A Hoffmann or an Edgar Poe could have found here a subject for one of his weird tales. It so happened that a sudden storm was lashing the windows with heavy drops of rain that rattled like hail; pale lightnings illumined on the shelves of the cupboards the old yellowed skulls and the grimacing death’s-heads of the Anthropological Museum; while the low rolling of the thunder formed an accompaniment to the waltz of Nes Khons, the daughter of Horus and Rouaa, as she pirouetted in the impatient hands of those who were unwrapping her.

The mummy was visibly growing smaller in size, and its slender form showed more and more plainly under its diminishing wrappings. A vast quantity of linen filled the room, and we could not help wondering how a box which was scarcely larger than an ordinary coffin had managed to hold it all. The neck was the first portion of the body to issue from the bandages; it was covered with a fairly thick layer of naphtha which had to be chiselled away. Suddenly, through the black remains of the natron, there flashed on the upper part of the breast a bright gleam of gold, and soon there was laid bare a thin sheet of metal, cut out into the shape of the sacred hawk, its wings outspread, its tail fanlike like that of eagles in heraldry. Upon this bit of gold a funeral jewel not rich enough to tempt body-snatchers had been written with a reed and ink a prayer to the gods, protectors of the tombs, asking that the heart and the viscer of the dead should not be removed far from her body. A beautiful microscopic hawk, which would have made a lovely watch-charm, was attached by a thread to a necklace of small plates of blue glass, to which was hung also a sort of amulet in the shape of a flail, made of turquoise-blue enamel. Some of the plates had become semi-opaque, no doubt owing to the heat of the boiling bitumen which had been poured over them, and then had slowly cooled.

So far, of course, nothing unusual had been found; in mummy cases there are often discovered numbers of these small trifles, and every curiosity shop is full of similar blue enamelled-ware figures; but we now came upon an unexpected and touchingly graceful detail. Under each armpit of the dead woman had been placed a flower, absolutely colourless, like plants which have been long pressed between the leaves of a herbarium, but perfectly preserved, and to which a botanist could readily have assigned a name. Were they blooms of the lotus or the persea? No one of us could say. This find made me thoughtful. Who was it that had put these poor flowers there, like a supreme farewell, at the moment when the beloved body was about to disappear under the first rolls of bandages? Flowers that are three thousand years old, so frail and yet so eternal, make a strange impression upon one.

There was also found amid the bandages a small fruit-berry, the species of which it is difficult to determine. Perhaps it was a berry of the nepenthe, which brought oblivion. On a bit of stuff, carefully detached, was written within a cartouche the name of an unknown king belonging to a dynasty no less forgotten. This mummy fills up a vacant place in history and tells of a new Pharaoh.

The face was still hidden under its mask of linen and bitumen, which could not be easily detached, for it had been firmly fixed by an indefinite number of centuries. Under the pressure of the chisel a portion gave way, and two white eyes with great black pupils shone with fictitious life between brown eyelids. They were enamelled eyes, such as it was customary to insert in carefully prepared mummies. The clear, fixed glance, gazing out of the dead face, produced a terrifying effect; the body seemed to behold with disdainful surprise the living beings that moved around it. The eyebrows showed quite plainly upon the orbit, hollowed by the sinking of the flesh. The nose, I must confess, and in this respect Nes Khons was less pretty than Tahoser, had been turned down to conceal the incision through which the brain had been drawn from the skull, and a leaf of gold had been placed on the mouth as the seal of eternal silence. The hair, exceedingly fine, silky, and soft, dressed in light curls, did not fall below the tops of the ears, and was of that auburn tint so much prized by Venetian women. It looked like a child’s hair dyed with henna, as one sees it in Algeria. I do not think that this colour was the natural one; Nes Khons must have been dark like other Egyptians, and the brown tone was doubtless produced by the essences and perfumes of the embalmer.

Little by little the body began to show in its sad nudity. The reddish skin of the torso, as the air came in contact with it, assumed a bluish bloom, and there was visible on the side the cut through which had been drawn the entrails, and from which escaped, like the sawdust of a ripped-up doll, the sawdust of aromatic wood mixed with resin in grains that looked like colophony. The arms were stretched out, and the bony hands with their gilded nails imitated with sepulchral modesty the gesture of the Venus of Medici. The feet, slightly contracted by the drying up of the flesh and the muscles, seemed to have been shapely and small, and the nails were gilded like those of the hand.

What was she, after all, this Nes Khons, daughter of Horus and Rouaa, called Lady in her epitaph? Young or old, beautiful or ugly? It would be difficult to say. She is now not much more than a skin covering bones, and it is impossible to discover in the dry, sharp lines the graceful contours of Egyptian women, such as we see them depicted in temples, palaces, and tombs. But is it not a surprising thing, one that seems to belong to the realm of dreams, to see on a table, in still appreciable shape, a being which walked in the sunshine, which lived and loved five hundred years before Moses, two thousand years before Jesus Christ? For that is the age of the mummy which the caprice of fate drew from its cartonnage in the midst of the Universal Exposition, amid all the machinery of our modern civilisation.