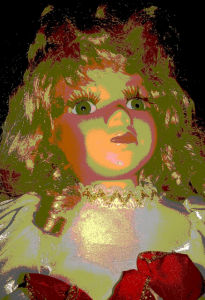 The curtains shivered gently in the breeze.? Sally sat on the stool, staring out the second floor window, as she had done every day since her mother died.? Not a word, not a caress, not a look had she given a single human since that day.? Trays of food left on the table by her side were toyed with, nibbled at, shoved aside.

Twice her nanny had tried to take the china baby doll from the sideboard.? Twice she had quickly returned it, the hair on the back of her neck standing up, electricity flickering through her body.? Sally had named the doll Lolly.? The nanny was certain that Lolly had something to do with the difficulty her ward was having in coping with her grief.

Then came the morning the nanny entered Sally?s room to find the curtains billowing, and the doll gone.? Sally sat on the stool, facing the door as the nanny entered, blood on her hands and chin, staining the front of her pretty nightdress.

?Mummy says things will be better now that Lolly is gone.?? Sally?s eyes were wide, intense, staring.? ?Mummy said Lolly wasn?t nice to me, so she had to be done away with. You?ll be nice to me, won?t you Nanny??? A grin spread slowly over her face, showing a small tuft of doll hair caught in her teeth.

You can read Lee Ann’s blog at http://amoderndilemma.blogspot.com/