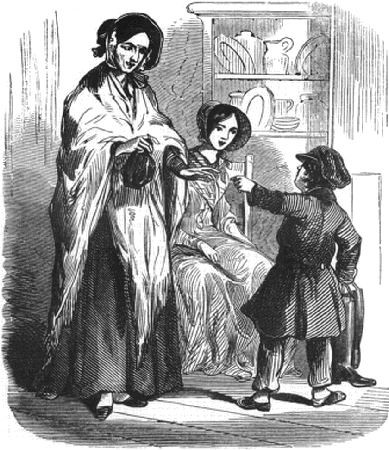 Mr. Herriot was sitting in his office, one day, when a lad entered, and handed him a small slip of paper. It was a bill for five dollars, due to his shoemaker, a poor man who lived in the next square.

“Tell Mr. Grant that I will settle this soon. It isn’t just convenient to-day.”

Now, Mr. Herriot had a five-dollar bill in his pocket; but, he felt as if he couldn’t part with it. He didn’t like to be entirely out of money. So, acting from this impulse, he had sent the boy away. Very still sat Mr. Herriot for the next five minutes; yet his thoughts were busy. He was not altogether satisfied with himself. The shoemaker was a poor man, and needed his money as soon as earned he was not unadvised of this fact.

“I wish I had sent him the five dollars,” said Mr. Herriot, at length, half-audibly. “He wants it worse than I do.”

“The fact is,” he at length exclaimed, starting up, “it is Grant’s money, and not mine; and what is more, he shall have it.”

So saying, Herriot took up his hat and left his office.

“Did you get the money, Charles,” said Grant, as his boy entered the shop. There was a good deal of earnestness in the shoemaker’s tones.

“Yes, sir; but he said it wasn’t convenient to-day.”

“Oh, dear! I’m sorry!” came from the shoemaker, in a depressed voice.

A woman was sitting in Grant’s shop when the boy came in; she had now risen, and was leaning on the counter; a look of disappointment was in her face.

“It can’t be helped, Mrs. Lee,” said Grant. “I was sure of getting the money from him. He never disappointed me before. Call in to-morrow, and I will try and have it for you.”

The woman looked troubled as well as disappointed. Slowly she turned away and left the shop. A few minutes after her departure, Herriot came in, and, after some words of apology, paid the bill.

“Run and get this note changed into silver for me,” said the shoemaker to his boy, the moment his customer had departed.

“Now,” said he, so soon as the silver was placed in his hands, “take two dollars to Mrs. Lee, and three to Mr. Weaver across the street. Tell Mr. Weaver that I am obliged to him for having loaned me the money this morning, and sorry that I hadn’t as much in the house when he sent for it an hour ago.”

“I wish I had it, Mrs. Elder. But, I assure you that I have not,” said Mr. Weaver, the tailor. “I paid out the last dollar just before you came in. But call in to-morrow, and you shall have the money to a certainty.”

“But what I am to do to-day? I haven’t a cent to bless myself with; and I owe so much at the grocer’s, where I deal, that he won’t trust me for any thing more.”

The tailor looked troubled, and the woman lingered. Just at this moment the shoemaker’s boy entered.

“Here are the three dollars Mr. Grant borrowed of you this morning,” said the lad. “He says he’s sorry he hadn’t the money when you sent for it awhile ago.”

How the faces of the tailor and his needlewoman brightened instantly, as if a gleam of sunshine had penetrated the room.

“Here is just the money I owe you,” said the former, in a cheerful voice, and he handed the woman the three dollars he had received. A moment after and he was alone, but with the glad face of the poor woman, whose need he had been able to supply, distinct before him.

Of the three dollars received by the needlewoman two went to the grocer, on account of her debt to him, half a dollar was paid to an old and needy coloured woman who had earned it by scrubbing, and who was waiting for Mrs. Weaver’s return from the tailor’s to get her due, and thus be able to provide an evening’s and a morning’s meal for herself and children. The other half-dollar was paid to the baker when he called towards evening to leave the accustomed loaf. Thus the poor needlewoman had been able to discharge four debts, and, at the same time re-establish her credit with the grocer and baker, from whom came the largest portion of the food consumed in her little family.
And now let us follow Mrs. Lee. On her arrival at home empty-handed, from her visit to the shoemaker, who owed her two dollars for work, she found a young girl, in whose pale face were many marks of suffering and care, awaiting her return.

The girl’s countenance brightened as she came in; but there was no answering brightness in the countenance of Mrs. Lee, who immediately said?

“I’m very sorry, Harriet, but Mr. Grant put me off until to-morrow. He said he hadn’t a dollar in the house.”

The girl’s disappointment was very great, for the smile she had forced into life instantly faded, and was succeeded by a look of deep distress.

“Do you want the money very badly?” asked Mrs. Lee, in a low, half-choked voice, for the sudden change in the girl’s manner had affected her.

“Oh, yes, ma’am, very badly. I left Mary wrapped up in my thick shawl, and a blanket wound all around her feet to keep them warm; but she was coughing dreadfully from the cold air of the room.”

“Haven’t you a fire?” asked Mrs. Lee, in a quick, surprised tone.

“We have no coal. It was to buy coal that I wanted the money.”

Mrs. Lee struck her hands together, and an expression of pain was about passing her lips, when the door of the room opened, and the shoemaker’s boy came in.

On the part of Harriet, to whom one dollar was due, a gush of silent tears marked the effect this timely supply of money produced. She received her portion, and, without trusting her voice with words, hurried away to supply the pressing want at home.

A few doors from the residence of Mrs. Lee lived a man who, some months before, had become involved in trouble with an evil-disposed person, and been forced to defend himself by means of the law. He had employed Mr. Herriot to do what was requisite in the case, for which service the charge was five dollars. The bill had been rendered a few days before, and the man, who was poor, felt very anxious to pay it. He had the money all made up to within a dollar. That dollar Mrs. Lee owed him, and she had promised to give it to him during this day. For hours he had waited, expecting her to come in; but now had nearly given her up. There was another little bill of three dollars which had been sent in to him, and he had just concluded to go and pay that, when Mrs. Lee called with the balance of the money, one dollar, which she had received from the shoemaker, Grant.

Half an hour later, and the pocket-book of Mr. Herriot was no longer empty. His client had called and paid his bill. The five dollars had come back to him.