You are here: Home / Featured / A Helpless Situation by Mark Twain 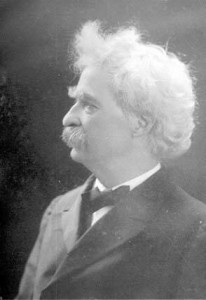 Once or twice a year I get a letter of a certain pattern, a pattern that never materially changes, in form and substance, yet I cannot get used to that letter—it always astonishes me. It affects me as the locomotive always affects me: I say to myself, “I have seen you a thousand times, you always look the same way, yet you are always a wonder, and you are always impossible; to contrive you is clearly beyond human genius—you can’t exist, you don’t exist, yet here you are!”

I have a letter of that kind by me, a very old one. I yearn to print it, and where is the harm? The writer of it is dead years ago, no doubt, and if I conceal her name and address—her this-world address—I am sure her shade will not mind. And with it I wish to print the answer which I wrote at the time but probably did not send. If it went—which is not likely—it went in the form of a copy, for I find the original still here, pigeonholed with the said letter. To that kind of letters we all write answers which we do not send, fearing to hurt where we have no desire to hurt; I have done it many a time, and this is doubtless a case of the sort.

Dear Sir,—You will doubtless be surprised to know who has presumed to write and ask a favor of you. Let your memory go back to your days in the Humboldt mines—‘62-’63. You will remember, you and Clagett and Oliver and the old blacksmith Tillou lived in a lean-to which was half-way up the gulch, and there were six log cabins in the camp—strung pretty well separated up the gulch from its mouth at the desert to where the last claim was, at the divide. The lean-to you lived in was the one with a canvas roof that the cow fell down through one night, as told about by you in Roughing It—my uncle Simmons remembers it very well. He lived in the principal cabin, half-way up the divide, along with Dixon and Parker and Smith. It had two rooms, one for kitchen and the other for bunks, and was the only one that had. You and your party were there on the great night, the time they had dried-apple-pie, Uncle Simmons often speaks of it. It seems curious that dried-apple-pie should have seemed such a great thing, but it was, and it shows how far Humboldt was out of the world and difficult to get to, and how slim the regular bill of fare was. Sixteen years ago—it is a long time. I was a little girl then, only fourteen. I never saw you, I lived in Washoe. But Uncle Simmons ran across you every now and then, all during those weeks that you and party were there working your claim which was like the rest. The camp played out long and long ago, there wasn’t silver enough in it to make a button. You never saw my husband, but he was there after you left, and lived in that very lean-to, a bachelor then but married to me now. He often wishes there had been a photographer there in those days, he would have taken the lean-to. He got hurt in the old Hal Clayton claim that was abandoned like the others, putting in a blast and not climbing out quick enough, though he scrambled the best he could. It landed him clear down on the train and hit a Piute. For weeks they thought he would not get over it but he did, and is all right, now. Has been ever since. This is a long introduction but it is the only way I can make myself known. The favor I ask I feel assured your generous heart will grant: Give me some advice about a book I have written. I do not claim anything for it only it is mostly true and as interesting as most of the books of the times. I am unknown in the literary world and you know what that means unless one has some one of influence (like yourself) to help you by speaking a good word for you. I would like to place the book on royalty basis plan with any one you would suggest.

This is a secret from my husband and family. I intend it as a surprise in case I get it published.

Feeling you will take an interest in this and if possible write me a letter to some publisher, or, better still, if you could see them for me and then let me hear.

I appeal to you to grant me this favor. With deepest gratitude I think you for your attention.

One knows, without inquiring, that the twin of that embarrassing letter is forever and ever flying in this and that and the other direction across the continent in the mails, daily, nightly, hourly, unceasingly, unrestingly. It goes to every well-known merchant, and railway official, and manufacturer, and capitalist, and Mayor, and Congressman, and Governor, and editor, and publisher, and author, and broker, and banker—in a word, to every person who is supposed to have “influence.” It always follows the one pattern: “You do not know me, but you once knew a relative of mine,” etc., etc. We should all like to help the applicants, we should all be glad to do it, we should all like to return the sort of answer that is desired, but—Well, there is not a thing we can do that would be a help, for not in any instance does that latter ever come from anyone who can be helped. The struggler whom you could help does his own helping; it would not occur to him to apply to you, stranger. He has talent and knows it, and he goes into his fight eagerly and with energy and determination—all alone, preferring to be alone. That pathetic letter which comes to you from the incapable, the unhelpable—how do you who are familiar with it answer it? What do you find to say? You do not want to inflict a wound; you hunt ways to avoid that. What do you find? How do you get out of your hard place with a content conscience? Do you try to explain? The old reply of mine to such a letter shows that I tried that once. Was I satisfied with the result? Possibly; and possibly not; probably not; almost certainly not. I have long ago forgotten all about it. But, anyway, I append my effort:

I know Mr. H., and I will go to him, dear madam, if upon reflection you find you still desire it. There will be a conversation. I know the form it will take. It will be like this:

MR. H. How do her books strike you?

MR. CLEMENS. I am not acquainted with them.

H. Who has been her publisher?

H. Ah. You think this is her first book?

H. What is it about? What is the character of it?

C. I believe I do not know.

H. Have you seen it?

H. Ah-h. How long have you known her?

H. Ah-h. How did you come to be interested in her book, then?

C. Well, she—she wrote and asked me to find a publisher for her, and mentioned you.

H. Why should she apply to you instead of me?

C. She wished me to use my influence.

H. Dear me, what has influence to do with such a matter?

C. Well, I think she thought you would be more likely to examine her book if you were influenced.

H. Why, what we are here for is to examine books—anybody’s book that comes along. It’s our business. Why should we turn away a book unexamined because it’s a stranger’s? It would be foolish. No publisher does it. On what ground did she request your influence, since you do not know her? She must have thought you knew her literature and could speak for it. Is that it?

H. Well, what then? She had a reason of some sort for believing you competent to recommend her literature, and also under obligations to do it?

H. Upon my word! So, you knew her uncle; her uncle knows her literature; he endorses it to you; the chain is complete, nothing further needed; you are satisfied, and therefore—

C. No, that isn’t all, there are other ties. I know the cabin her uncle lived in, in the mines; I knew his partners, too; also I came near knowing her husband before she married him, and I did know the abandoned shaft where a premature blast went off and he went flying through the air and clear down to the trail and hit an Indian in the back with almost fatal consequences.

C. She didn’t say which it was.

C. I knew her uncle. You are forgetting her uncle.

C. Well, I don’t know that I really knew him, but I must have met him, anyway. I think it was that way; you can’t tell about these things, you know, except when they are recent.

H. Recent? When was all this?

H. What a basis to judge a book upon! As first you said you knew him, and now you don’t know whether you did or not.

C. Oh yes, I know him; anyway, I think I thought I did; I’m perfectly certain of it.

H. What makes you think you thought you knew him?

C. Yes, she does, and I did know him, too, though I don’t remember it now.

H. Come—how can you know it when you don’t remember it.

H. (After a pause). Is your time valuable?

So I came away then, because he was looking tired. Overwork, I reckon; I never do that; I have seen the evil effects of it. My mother was always afraid I would overwork myself, but I never did.

Dear madam, you see how it would happen if I went there. He would ask me those questions, and I would try to answer them to suit him, and he would hunt me here and there and yonder and get me embarrassed more and more all the time, and at last he would look tired on account of overwork, and there it would end and nothing done. I wish I could be useful to you, but, you see, they do not care for uncles or any of those things; it doesn’t move them, it doesn’t have the least effect, they don’t care for anything but the literature itself, and they as good as despise influence. But they do care for books, and are eager to get them and examine them, no matter whence they come, nor from whose pen. If you will send yours to a publisher—any publisher—he will certainly examine it, I can assure you of that.