You are here: Home / Literary Story / At the Entrance of the Library by Ahmed Moneeb 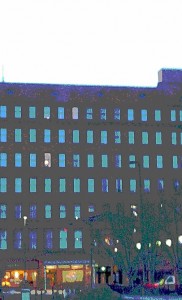 At the Entrance of the Library

Place: Mosul University -Iraq Time: A spring day full of violence in a city one day was called the city of two springs! Full of longing, he was waiting to see her. The mysterious admirer had written to him a very short note “Wait for me at the library entrance. Let’s meet in a few minutes.” His tired eyes were watching each passerby with curiosity and wondering “Is she that one coming now or that one walking there, or that … or? Who is she?” His widely open imagination was contemplating her warm voice when saying hi, her beautiful eyes, her charming smile, and even her fresh floral perfume! Minutes raced past and the sky began to sprinkle shy raindrops. Nevertheless, he was certain she would come soon. The hours sped by and the library closed. Everyone left. Even the birds flew away at the sound of the continuous explosions and gun fire! When the sad sunset came and the curfew began, he was still telling himself, “I am sure she will come soon.” Days, weeks, months, and years elapsed. The seasons alternated around him while still he waited for her. Generations followed one another. Times changed as well as the topography, and the game of musical bloody chairs ended. All the masks wore away as a result of time-eroding factors! Feuds became alliances. Strangers became friends! In spite of all that, he remains certain she will come soon! On one beautiful spring morning as he is as usual telling everyone, “She will come soon!” one of the butterflies lands on his ear and whispers, “Do you know, sir, that a hundred years ago the entrance to the library moved to a place beyond the horizon!” ### Ahmed Moneeb is a PhD Candidate at Oklahoma State University.