You are here: Home / Adventure / Going Forward by Lisa Coruzzi 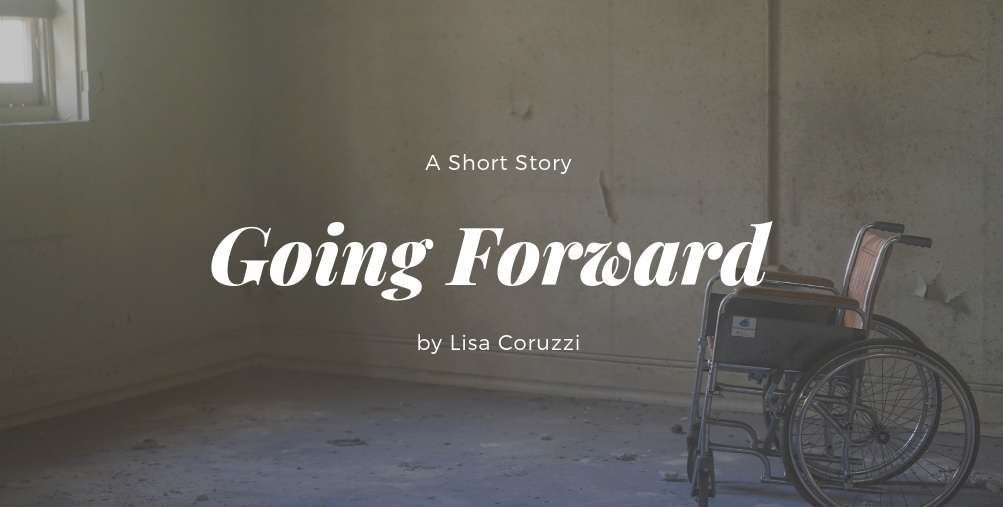 It’s bloody freezing. Margaret reached out a thin, leather-gloved finger to activate the handicapped access. She pressed hard before replacing her hand underneath the blanket draped across her lap. She shivered and wished her husband would hurry up parking the van; Margaret dreaded going into this doctor’s office more than any other, and she’d rather not face it alone.

Irritation drove her hand forward again with more effort. Nothing. Margaret craned around from her spot in the chair to see if Gerald was nearby, but he wasn’t. Panic crawled from her stomach to envelope her heart; she didn’t know what to do. She felt stupid calling for help and a glance at the windows revealed how exposed she was to strangers’ stares. Worse, even without seeing them clearly, she knew the pity-ripples that would cross their faces. Margaret had seen the look from many people since her accident, and it always made her feel like a child, as if she were incapable of doing anything without assistance.

“Help.” She said with an impatient eyeroll, and not nearly loud enough, she knew.

Where is he? She turned her head to look for Gerald but still, no sign. Margaret couldn’t understand; he’d left her at the entrance, and the disabled space was what, fifty feet across the parking lot? She released the brake and wheeled around, pushing tentatively toward the curb. From the edge she would be able to see the van, and Gerald, who was probably fussing over something inconsequential like the elastic netting in the back, or maybe righting one of his work folders that had come loose from its place in the stack on the back seat.

The van wasn’t there. Neither was Gerald.

Panic flipped to fear. Margaret couldn’t wheel the chair any further forward without falling over the curb, and where the sidewalk joined the tarmac seamlessly was too far down the side of the building. She couldn’t comprehend, and prompted by alarm bells inside; she felt the heat wave rising in her face followed by the crest of tears.

Taxed by the whirl of emotions, Margaret grimaced with the effort of moving the wheelchair back to the entrance. There, she repeatedly jabbed the button, choking out unintelligible words of confusion. She glanced from the door to the road until finally, after hurtling through imaginings so terrible, of a life of paralysis without any help, Margaret cried out.

Margaret propelled herself forward without question, creating a ragged scene inside, but her breathing calmed when she noticed the warm and inviting atmosphere. It was definitely not the doctor’s office.

Serenity settled in and she understood that Death, who had previously missed his opportunity, had returned for them. How it happened was unimportant; she knew with absolute clarity that this was her crossover point. Margaret rose and took a step forward.

It’s true then, that the soul goes unencumbered by anything physical. She smiled and walked to meet Gerald at the light.

Lisa was born in Virginia, but raised in England. She returned home fifteen years ago, and lives in Delaware with her husband and children.