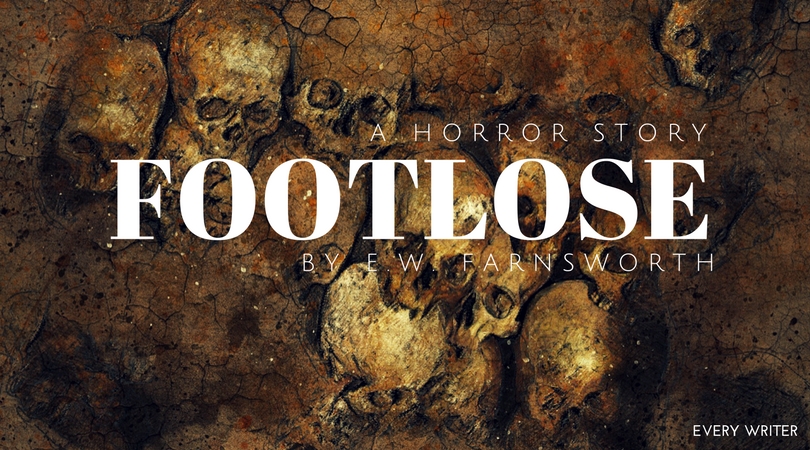 It was dark, and the party was going to start on the other side of the freshly-plowed south pasture anytime. Bob impatiently stomped through the damp earth toward the Thompson Farm.

“I can’t keep up, Bobby. You go right ahead. Becky Thompson will be waiting for you. I know how to cross the pasture well enough by myself.”

“Be careful of the skeletons Farmer Jones unearthed when he plowed through the Confederate mass grave today. Bones are sticking up everywhere.”

“Nonsense. You’re just saying that to scare me on Halloween. I’m not going to listen. And I’m not scared either.”

Sue pulled out her bricked cell phone. She could not even make its pen light work. Across the field, she thought she saw a light, hovering and blinking.

“Bobby, are you still out there?” she called.

Her brother did not answer. A dog howled at the full moon.

“At least I have moonlight,” she thought. Then the beacon she was following winked out.

“Can I follow the sound of the dog?” she wondered.

She took a deep breath and set her teeth. In a steady rhythm, she made her way through the clods toward the distant light. She lifted her ankle-length skirt.

“That’s probably futile. The hem will be soiled. My shoes are ruined already.”

When she stumbled, her hands flew forward to break her fall–in vain. The earth was a cushion. She got back on her feet and rubbed off the dirt.

Continuing, she felt a branch underfoot. It snapped. She reached down and wrapped her hand around a bone.

She was on the rise of the mass grave holding a long-fallen soldier’s bone. A frisson of fear ran down her spine. She muttered the first words that came to mind.

“Though I walk through the valley of the shadow of death . . ..” She laughed hysterically.

She fell again. Something caught her foot. It would not let go. She struck the place where she was being held. Bone met bone.

She threw the bone away and slid her hand down to find a bony hand around her ankle.

She was now using both hands to pry the hand apart. She scrambled to her feet and pulled her foot back, but the grasping hand would not let her go.

Bobby, if you can hear me, say something!”

She strained forward as the hand became an arm, a shoulder, a backbone and a skull. It held her struggling ankle until she pulled an entire skeleton from the soil.

By moonlight, she saw the skull cocking to get a better view of her. It seemed to be smiling now that it was free.

The bones rose and released her foot. She edged out of the skeleton’s range and ran. The skeleton followed.

They reached the party and joined the others in their antic dance of death.

At midnight, Sue, Bob, Becky and the rest returned to their graves.

E. W. Farnsworth lives and writes in Gilbert, Arizona. Widely published on line and in print and known for his prize-winning horror stories, he is author of ‘The Black Marble Griffon and Other Disturbing Tales,’ a volume published by Zimbell House Publishing LLC.
For updates on Farnsworth and his writing, please see www.ewfarnsworth.com.
.