You are here: Home / Horror Stories / The Sack by P. Thompson 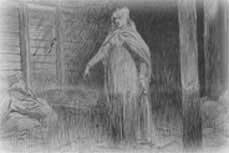 “Gimme all your Halloween candy, twerp,” the teenager growled as he stepped out of the shrubbery by the cemetery, blocking the path of a boy dressed in a ghost costume. The adolescent raised his rubber skull-mask from off his pizza face and balled his free hand into a fist. “If you don’t hand it over, I’ll cram this knuckle sandwich through your buck teeth!”

“I’ve been out collecting this stuff since dusk,” the phantom yelled, and bravely clutched the sack tighter in his hands. “I ain’t giving up my pickings without a fight! What makes you think I have anything you’d want anyway?”

“You’re cruising for a bruising, squirt. Don’t you know who I am? I’m Mike, leader of the Enforcers at the middle school. It’s sort of an after school disciplinary program,” he bragged.

“So, you’re a big galoot in a gang that thinks he’s somebody. That’s supposed to make me afraid of you. Maybe you don’t know who I am.”

“You’re a dweeb dressed up in your momma’s old bed sheet, that’s who you are. I clobber creeps like you into the ground for exercise. Now, fork over the sack or I’ll pound you!” Then Mike snatched the bag from the ghost’s hands.

“I wouldn’t open that if I was you,” the specter exclaimed! “Stealing is a sin, especially on Halloween! Real spooks are out on Halloween looking for sinners to feed on. They’ll gobble you up.”

“Bull crap. You’re full of it, pea-brain. I’ll gobble up all your treats and make you watch.” Mike jeered, and then he rammed his hand into the sack.