You are here: Home / Horror Stories / Greensville by Samantha Schneider 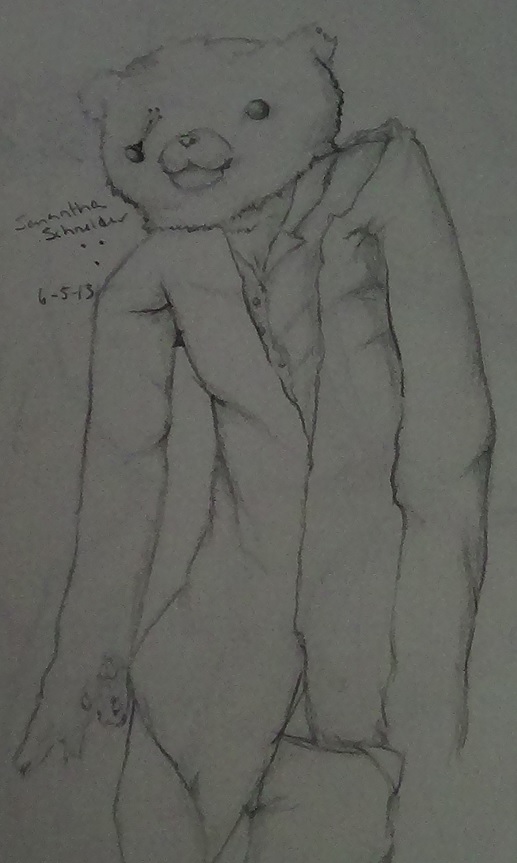 I like Greensville he’s always been nice to me. I meet him a month ago on my way home from school; when I accidently dropped my stuffed animal down the street drain I tried to reach down to grab it but my arms weren’t long enough. But he was nice enough to hand it up to me. After that he followed me home and now lives in my closet. I give him food he never eats, he doesn’t sleep or talk ether but I understand him even if he doesn’t say anything. I think he’s silly and I tell him that to; because he wears a mascot bear head that’s a bit torn with a button eye dangling low on its string, and he never takes it off. He wears a nice grey suit with a black tie like daddy dose, except Greensville’s suit is dirty with mud. Also he slouches one shoulder and has a bow leg. We play a lot too but quietly so mommy, daddy and brother don’t find out about Greensville. I don’t think they would be very happy with me and Greensville only wants to be my friend.

But I think Greensville really likes my brother too. Sometimes at night Greensville goes to visit big brother in his room. One night I followed to see what he does, he stands over my brother’s bed to watch him sleep for hours; like a guardian angel! Tonight Greensville went to go play a game with my brother, I wanted to come but he told me that I couldn’t. He said it was a big kid’s game to scary for me, so I stayed in my room but left the door cracked. I watched him go to brother’s room; it was silent for a while so I waited. Then I heard my brother’s blood curdling scream “Ahhhhhhh! NOOO! GOD NOOO!” He shouted *THUMP* there was a loud bang that made the floor tremble beneath my feet. I kept my eyes on the room till Greensville stepped out dragging my brother behind him by the ankle. He thrashed and screamed as Greensville pulled him across the hall in to the bathroom “NOOO!! SOMEBODY HEELP MEE!! I DINT MEAN IT! IM SORRY.” His voice was muffled as the last of my brother disappeared into the bathroom. I heard one last scream before it turned only to the sound of gurgles and splashing. It splashed for minutes before it went silent again. Greensville walked back out still dragging brother his hair and shirt soaked with water, a gaping mouth with unblinking eyes. He walked down the stairs brothers head thumping on each step *THUMP* *THUMP* *THUMP* the front door slammed and they were gone.

One week later we saw brother on the news found in a sewer, now he’s famous like Greensville was a month ago.