You are here: Home / Short Short / Retreat by Jack Coey 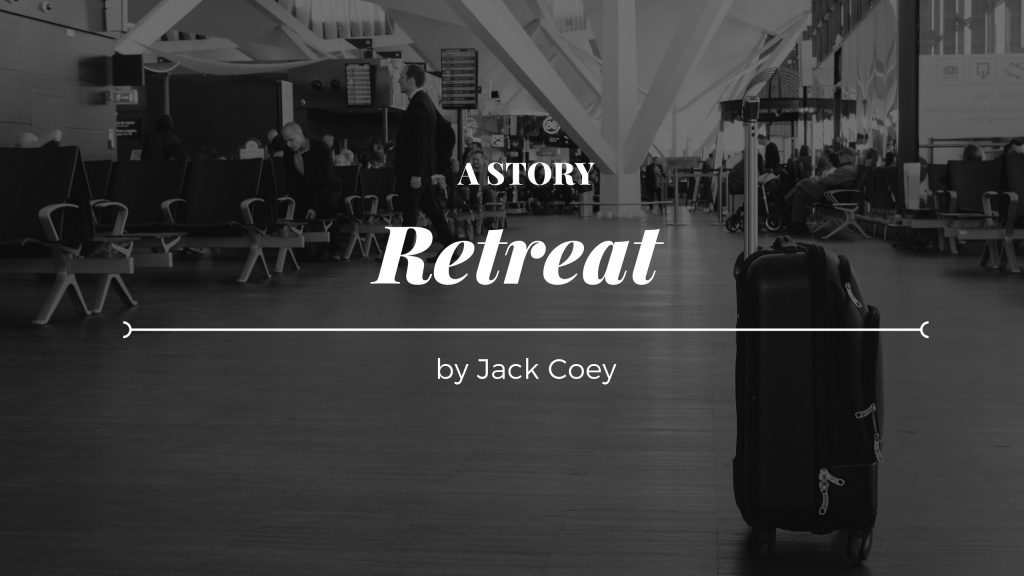 She ran away from home, and Pastor Bruce was dismayed after talking with her mother. Her mother said she’d been sullen for the last month or so, and even the school nurse called once. Her daughter wouldn’t tell her what was wrong, and she asked Pastor Bruce whether she ever said anything to him, and the only thing Pastor Bruce could say was they talked about her going to community college in the fall. Her name was Theresa, and she was seventeen years old, and her mother feared she was addicted to drugs. Pastor Bruce didn’t think that was right, and speculated on her boyfriend, Roger. Roger was a likeable fellow, and the top shoe salesman at Penny’s even though he worked part-time while going to college. The managers at Penny’s thought he had a prosperous future as a salesman. Pastor Bruce asked if she’d talked to Roger about what he knew. Theresa’s mother said she was angry with Roger, and Pastor Bruce waited for more, but only heard silence. Pastor Bruce thought there was a good chance that may have something to do with this. He was curious, and wanted to ask, but changed his mind. He asked about her husband, who he bowled with, and she said he traveled a lot for business, and was flying back from Houston. After he hung up the phone, he sat at his desk, and looked out over the green lawn of the church. He pictured Theresa, and drove the image from his mind. He squeezed his hands into fists to help him discipline his thoughts. His envy of Roger, and the pleasure he had with Theresa, made him feel weak and sinful. He took up the sermon he was writing on his desk, and distracted himself with that. He wanted to help others with temptation. One had to deny oneself pleasure for a greater good was the idea he had, but what was the greater good? And why would one deny oneself pleasure now for a greater good later? He looked at the green lawn and focused his thoughts. The verse from Corinthians came to him: but with the temptation he will also provide the way of escape that you maybe able to endure it. That’s it. One has to have belief that God will deliver him if one has the will to resist. So maybe my message is that temptation is a temporary condition that won’t last if one has belief in the Lord. He liked that, and thought of Theresa. He heard something in the outer hallway. He stood up from his desk, and went to the door, and saw a middle-aged man in a sweat shirt and khaki pants standing in the hallway. He held up a badge.

The two men walked into Pastor Bruce’s office, and the detective sat in a chair facing the desk. He took out a notebook and pen.

“Theresa Murphy ran away from home last night, and we’re talking to people who knew her to gather information.”

“She is a member of your congregation?”

“Just Theresa or Theresa and her parents?”

There was silence as the detective wrote in his notebook. He looked up, and paused, before he said,

“I mean without her parents?”

“Yes, that’s not unusual for teenagers to be here for activities without their parents. The parents like it, in fact.”

“Last month there was a retreat?” Pastor Bruce shifted in his seat.

The detective didn’t say anything.

“I took a group of teenagers to Foster Falls for an overnight retreat.”

“That was when her mother saw a change in her attitude.”

“I refute your insinuation that the retreat had anything to do with that.”

The two men briefly made eye contact. The detective wrote in the notebook.

“Okay. I’m going to be talking with you again. Thank-you for your time.”

The detective stood up and walked out of the office. Pastor Bruce sat at his desk for a long time. Later that afternoon, Theresa’s father thought it odd when he saw him in the airport concourse.