You are here: Home / Featured / The Jinx by Adam Renn Olenn 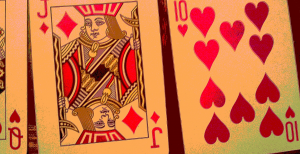 Five hundred lousy bucks, that’s how close I got to taking care of the car, the rent, credit cards, everything. I came in with two grand and almost walked out with the whole eighteen. I know it was that waitress, I could smell the jinx on her. They probably keep her in reserve just to fuck things up for guys like me, guys just trying to pay some bills.

I shoulda split, but I’d been working for six hours and I was hot, one throw from having it all locked up. Clarissa wouldn’t have had nothing to say to that, would she? Me coming home with all the money? But the jinx came straight across the floor and touched me on the elbow. “Getcha drink, hon?” And then it turned.

Suddenly, instead of walking out free and clear into the hot night, I was a grand down. A grand down ? hell, I was up fifteen-five, but I couldn’t see that, and I started chasing it. Nothing worse than digging out of a hole – the harder you work, the worse it gets.

In less than an hour I was flat. The jinx was on me the whole time, bringing me drinks, hustling her spandexed ass to the bar and back. “Gotcha double, hon,” and, “It’s on the house, hon,” holding her tray out for a tip every time. Then after they’d sucked up my last two thousand, what’s she say? “It’s twelve for the drink, hon,” that’s what. I split. I wasn’t paying her twelve bucks for a lousy drink even if I had it.

I shoulda known stiffing a jinx would only make it worse. She’d touched me, and it was on me now. I went outside and they brought my car, but I didn’t have nothing for the valet neither. He’s probably the one called me in. No, it had to be the jinx. Had to.

I got down the end of the strip and cut over to fifteen, and I wasn’t even up to speed before I saw the flashers. Six hours of stone sober work, until the jinx. The jinx and her drinks.

They put me in the back. The seat was hard plastic, the kind they can hose down at the end of the night, and it made the cuffs dig into me. We sat there waiting for the tow truck, and I wondered if the repo guys would get stuck with the impound bill. I gotta admit, the thought made me smile.

They offered me my call, but I didn’t take it. Who was I gonna call? Clarissa? She’d just yell and cry. Might was well let her get some sleep before she started all that up. I didn’t want to talk to her anyway. Not now.

And you know what the best part is, the kicker? Know what they set my bail at? Yeah. Five hundred bucks.