You are here: Home / Featured / What Was Born by Michelle Soucy 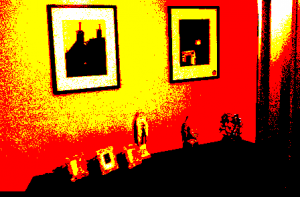 She couldn?t decide what she hated the most about her husband.? He lay next to her, breathing.? She hated his breath. Too loud, forced.? Who breathed like that?? Was he doing it on purpose?? She shifted her leg to take some pressure off of her aching lower back, and stared at the blank white ceiling.?

She wrinkled her nose, her forehead, and after a moment said quietly but firmly, Not yet.?

Well why don?t you close your eyes?? Your eyes are wide open.? Nobody can sleep with their eyes open.

Don?t worry about my eyes.? I?ll sleep when I?m ready to sleep.? Worry about your own eyes.? I?m not keeping you awake.?

No, I?m not.? She shifted her legs, her back.? He fluffed his comforter and sighed.? She noticed one spot, in the far corner of the ceiling, a dark spot.? Was it a feather?? A bit of dust?? Did it just move?? Was it a spider??

Is that a spider over there?

There, see, in the corner.? She pointed.

There, over there, way in the corner, see?? See, I think it moved.

How can you tell?

Because it?s not.? Can?t you just try to go to sleep??

Come on, just try.? You?re not even trying.? You never try.

She shifted her back and legs.? She pulled her comforter up closer to her chin and closed her eyes.?

They lay in silence for a few moments but the air in the bright white room was alive, full of waves, of static.? She could hear him scratching some part of his body under the comforter.? She hated the sound of that scratching.? Then he cleared his throat with a loud gurgle.? Oh, she hated that.? He did it again, louder.? She scowled and looked in his direction, saw his wedding band, dusty on the far corner of his nightstand.? She couldn?t remember when they had stopped wearing their rings.? She clasped her fingers together beneath her comforter, the way she did as a child about to play Here is the Church, Here is the Steeple.? She held her hand, her own hand, closed her eyes.? Children?s games.? She would never now have occasion to play children?s games.? She squeezed her fingers tightly, squeezed her shut eyelids.? Clenched her teeth.?

Her husband sighed loudly and kicked his feet.?

Oh, now you?re getting up??

He stood in front of the partially-closed blinds, and the sunlight split in two around his body.? She looked at his shadows, one on the wall, one on the bed shivering close to her.? As he moved, the shadow on the bed became smaller, a slight, quiet, innocent version of him.? Like the child that they had once planned upon who had never come.? For this, she hated him.? And herself.? For this, she hated all three of them.?

Michelle Soucy has published work in The Florida Review, The Bryant Literary Review, and elsewhere. She was the recipient of a first place national award from the AWP.? She received her MFA in July 2010 from the Stonecoast MFA program.