You are here: Home / Featured / Bee Cloud by Rebecca Loudon 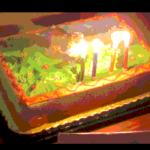 My sister Bink turned twenty-six two weeks ago. It wasn’t easy to pry her out of her room for her party and cake and the present Dad bought at Big!Lots. The truth is Bink hadn’t been out of her room for at least three years. She agreed to a bath but screamed the whole time. It took me and DJ and Little Crisp and Dad to hold her down in the tub. I lifted her belly flap and Little Crisp washed under with the wash cloth while Bink screamed. Dad sang the horse song then Bink simmered down and sang along as Dad scrubbed her poof of thin pink hair.

Luckily none of the birthday guests could hear. It was hard enough to cram four extra people into our kitchen. They ate DJ’s party snacks—bologna with spray-on cheese smiley faces a bowl of Bac-O-Bits raw hot dogs on sticks that were really yellow straws with bendy tops and punch he mixed in a bucket starring a giant can of Hawaiian fruit punch vanilla ice cream and little marshmallows. DJ was the house cook and he did pretty good for a six year old. You couldn’t complain. Seriously you couldn’t. One time I hid a pork chop under the couch and DJ found it and bit me on the thigh. That kid’s teeth are sharp. The bite got infected and stayed full of puss all summer.

Bink whimpered as Little Crisp and Dad got her dressed. Dad slipped her wings on but the elastics twisted and Bink said they pinched her arm fats. Little Crisp sat on Bink’s stomach as Dad struggled to pull up her socks and tie her shoes. Each time Dad got one tied Bink kicked it off. She ended up wearing just the one. Then Little Crisp dried Bink’s hair with the hair dryer that looked like a Martian gun until it puffed up all around her head.
DJ refused to entertain the party guests and was outside riding his Disney Princess bike in ever widening circles out of the yard and down the street and back. Dad put the cake in front of Bink and she blew out the candles. She knocked her birthday present off the table with her arm. Dad said “Happy birthday Bink. You look real pretty today.” Bink shoved a handful of cake in her mouth. Aunt Lucy said “It’s true Bink you look young as ever.” Uncle Lou looked at his feet. Cousins Eldon and Bethany made faces at each other as Bink opened the present. It was a blond wig with bangs and a black head band permanently attached. Everyone took turns trying it on and laughing at each other and when Little Crisp finally pulled it over Bink’s head Dad took pictures and made everyone say CHEESE. No one knew where DJ had got off too. We looked outside for him but couldn’t find him anywhere. We’re still waiting for him to come home.

Rebecca Loudon lives and writes in Seattle. She is the author of Tarantella, Radish King, and Navigate, Amelia Earhart’s Letters Home. Her most recent book is Cadaver Dogs from No Tell Books. She is a professional musician and teaches violin lessons to children.