You are here: Home / Featured / Too Late for Lunch by Benjamin Eggleton 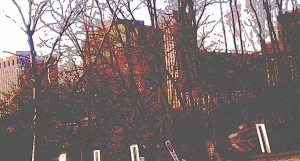 Too Late for Lunch by Benjamin Eggleton

I threw a weekend lunch party and invited the people we should have been. He was older than me, a little more hair on top, and he had already finished his masters. She was just as stunning as you are, and I don?t remember her not smiling. They talked of the places they had been and the things they had seen. I thought about the places I still had never gone, and the things left to do.

I served barbecue pork and potato salad. He scratched over his plate with the fork, pulling up slow bits of food and chewed them methodically. Not one bit of food escaped his well poised lips. She complimented me on my cooking, even though we all knew it wasn?t great, and she ate until she was full. She didn?t eat too much, but she did eat enough. I twisted the food around my plate, embarrassed by the swirling mass.

He asked me how long I had left to go in school, and I told him I had just finished my junior year. ?You?ll get there,? he told me, but I?m not sure if I believed him. She turned her head, a graceful little twist, and it?s funny, she has your hair. They showed me pictures of their trip to Africa, the children, the Savannah, the wild animals. I thought of our almost adventure, how we were going to go and really do something, something worth doing.

After lunch, we wanted to go to the pool to relax. I showed them a room to change, and I went to another room. While they were changing, I tried to call you but you never picked up. I was going to tell you we could still go to Africa, but when the voice-mail beeped, I didn?t know just what to say. I didn?t know how to tell you I had talked with the people we were supposed to be, that they asked where you were. So I put on my swim trunks and went back out there.

Raised in the Appalachian Mountains, Benjamin Eggleton is a 23 year old writer, originally from Stillwater, Oklahoma. He moved to Arkansas after graduating high school in St. Albans, West Virginia. His other publications include a short story entitled, “What Didn’t Happen,” which was featured in Ampersand, a literary journal of the University of Arkansas in Fayetteville, where he is studying English