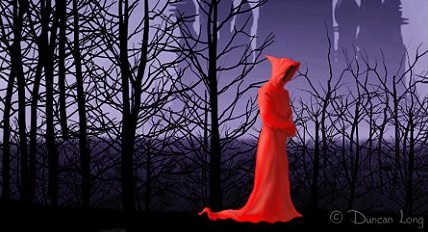 It was a chilly Thursday, sometime last November. I had very late night at the office. Since I was the last one there, I had to check all the rooms and then lock up. I turned out the last light, then was on my way out. I locked up and headed to my car. I went to unlock the door,
when I see that it’s already unlocked..? I always lock my car doors. It’s one of those obsessive things that everyone has. This was definitely weird. I open the door, and everything seems
perfectly fine. I convinced myself that I was probably just thrown off my groove, and forgot to lock it. I turned the radio up way loud to keep me awake.

I was probably 10 minutes away from being home. Everything is going perfectly fine. I checked my rearview mirror, and I see a pair of huge, blue glowing eyes. I slam on the brakes and whip around immediately. It’s a man, but I didn’t know him, and I couldn’t see his face well enough because it was so dark.

“WHAT THE HECK ARE YOU DOING IN MY CAR?!” I scream, my heart pumping out of my chest. He just looked at me, and got this huge, evil grin on his face, from ear to ear.

“It’s about time you noticed me,” he snickered. So many things were going through my head. So many questions.

“Keep driving, or you’ll regret it.”

At this point adrenaline was pumping through my veins faster than teenagers going to lunch. I didn’t know what he was planning on doing. What if he had a gun? I turned around, put my car in drive, and continued down the road.

“I’m just here to warn you. You have until October 23rd of next year. Don’t tell anyone about this or else that date will be moved up. You can try moving, changing your job, whatever. I’ll still going to find you, so it wouldn’t be worth the try. See you then.”

I was so confused. What did that mean? Who was he? Then, I realized that it was completely silent. I check the back seat and he’s gone. He completely vanished into thin air.

What. The. Actual. Frick.

I finally get home. I simply locked my car, walked inside and got straight into bed.

I know he said not to tell anyone, but it’s been 11 months. There hasn’t been a single day that I don’t think about that night. Wondering if he’ll ever just pop up again. I’ve been extremely paranoid about someone being in my backseat. I check at least 3 times before I start my car, just to make sure he isn’t there. This guy, whoever he was, completely ruined whatever ounce of sanity I had left.

Oh, and want to know another fun fact?