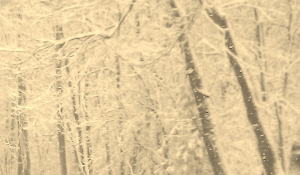 On December 7, the first snow came to the Port. With no wind, the white lace fell like a wedding veil. Touching down on the brown river, the flakes vanished into the out-bound tide.

Behind an eight foot window at the river’s edge I paused in the ritual of morning push-ups. In bare feet I absorbed the quiet.

Outside, two Adirondack chairs faced the river. As the chairs gathered snow, I imagined Mother and Father sitting with their backs to me. Not sick anymore, not in pain, they were taking in the magic.

A trick of memory and light, I saw Mother turn her head and say something to Father. Perhaps it was a shortness of breath, or the blood rushing from my chest to my head, but there they were for a moment, and the moment lingered.

In December 1955, the Grace Line ship Santa Maria entered New York Harbor. I was nine, and we had sailed up from Peru for the last time. As the ship eased her way through the morning snow, Mother jammed and zipped me into winter clothes. Father paced, exhorting her to hurry. Wrapped and tied like a package, Father took my hand and hauled me down the passageway

Father had been in the Navy during World War II. At sea he walked like Popeye. Legs apart and slightly bowed, his shoulders and hips moved with the rhythm and roll of the ship. On deck my face hit the wind, my boots slipped on the ice and I landed on my seat. Father laughed. Picking me up, he carried me to the rail and pointed through the squall.

“Look,” he said. “There, see it?” I shook my head. He directed me to follow his finger. I sighted down his arm as if it were the barrel of a cannon. Then I saw her, the Statue of Liberty. Massive, majestic and pale green, she stood ghostly in the snow that swirled about her.

Father set me on deck, came to attention and saluted. I did as well. We held our salutes as we passed her. Snow blew in my eyes, landed on my lips. I tasted it. Father cut his salute and knelt. He hugged me hard. “You’re home,” he said. His ears cold against my cheek, his warm breath smelled of tobacco and coffee.

In Spanish, Mother called my name. I turned. She had come on deck in a long fur coat with the collar turned up. Mother’s tall beauty and dark hair made me smile.

Bending down she fussed with my hood. “No tienes frio?” I shook my head. “Ay, mi macho”, she cooed, brushing the flakes from my eyes.

From my window, the Adirondack chairs sat empty and white. On the river, among the ducks, the first snow continued to weave its spell. Against time and place, Mother and Father had returned, if only for a moment, to inquire. And I answered them in Spanish, “Thank you, yes, I’m fine.”

George Masters served with the Marine Corps in Vietnam and graduated from Georgetown University. In addition to being a freelance writer, he has worked as a commercial fisherman, construction worker, bartender and substitute teacher. His writing has been published in national magazines and newspapers including the Boston Globe, Harvard’s Charles River Review, Chicago Tribune and San Francisco Chronicle.