You are here: Home / Featured / House for Sale by George Eyre Masters 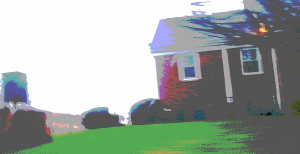 It was October. The steel sign on the front lawn was blue and white and too damn big. Cutting the grass, I had to work around the sign and I didn?t mind banging it with my machine. The house watched me from all her windows. She knew and had been quiet about it. For the moment I tried to ignore her.

Glancing up, I thought for a moment that I saw my daughter in the dining room window. As I worked, she seemed to be following me from room to room.

Low on fuel the mower sputtered, coughed and kicked in again. I liked cutting grass. The world thinks you?re working. With the engine roaring, grass, weeds and sticks went flying. Humans stayed out of my way; tourists didn?t ask how to get to George Bush?s house.

Another nineteen feet and the engine died. The smell of gasoline pleased me as I filled the tank. It felt good in my shoulders and arms to push the machine, to drive with my legs as I worked up a slope. When I searched the kitchen windows, my daughter was gone.

I switched to a weed whacker and like a barber worked carefully around the hedge of sea roses. I trimmed between the smooth, heavy stones that surrounded the elm in the side yard. Ten years ago, my wife and daughter had chosen the stones from a rocky beach, and I carried them up to the car, two at a time.

The sun moved into late afternoon and I put the machines away. From the sidewalk I surveyed the crew cut lawn. For one more day it was my grass, still my house. I looked up at her Victorian peaks. Over a hundred years old, she was well built and graceful. Beautiful I thought.

I wanted to wrap my arms around the house and ask her forgiveness. I needed to thank her for all she was and had been– my dream come true.

?It?s not your fault,? I assured her. ?I don?t want to let you go.? Words failed, my voice faltered. ?You were fine. Far, far better than fine. In summer you kept us cool. Through the hard bitter winters you gave us shelter, warmth and peace. You protected us from ocean storms and driving rains. Yes, you were grand; you still are. I don?t know what I will do without you.?

With the sun going down, I sat on the front steps with a beer.

Before dawn I listened to the house breathe. From the pillows, came a trace of my ex-wife?s perfume. Outside in a big elm, crows and seagulls argued like drunks leaving a bar. Then they did.

Black to grey, the morning developed like a Polaroid.

The house was sold. The bedroom sighed, and the refrigerator kicked on. Across the street, a rip of orange burned above the trees. Enough light now to see a bedroom uncluttered by her things.

Making coffee, I went outside and sat. Like a beautiful woman passing by, the smell of autumn and ocean turned my head.

George Masters served with the Marine Corps in Vietnam and graduated from Georgetown University.? In addition to being a freelance writer, he has worked as a commercial fisherman, construction worker, bartender and substitute teacher.? His writing has been published in national magazines and newspapers including the Boston Globe, Harvard?s Charles River Review, Chicago Tribune and San Francisco Chronicle.