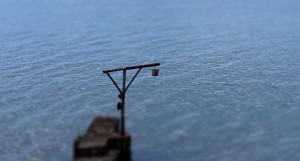 I threw my tackle box in the bed of my truck, chunks of rust bounced off the tire. Billy pretended not to see it. He struggled with the jumbled words in his head. He wasn’t the type to come out and ask, so he bit his lower lip and concentrated.

His timing during tuna season was suspicious. Everyone knew I packed my gear in Old Sandy on Thursdays at dawn. Then, after a breakfast of three eggs—over easy—four pieces of crispy bacon and dry toast, I’d warm up my trusty friend. When she finished sputtering and gasping, about the time Day woke up the sleepy sky, Billy would appear.

And it was always the same: “Say, I was on my way to Jeff’s restaurant and noticed you fidgeting with Old Sandy. Need some help?”

Not one for chin-wagging, I’d say, “She’s fine,” never divulging where I was going. He knew. And I knew he wanted to go, but offering would mean losing leverage. So I’d pour a little gasoline in the carburetor and turn the screwdriver until she was idling properly.

Billy glanced at his new car, kicked at the dirt and flicked paint off Old Sandy. He wanted to offer me his car, providing he could go along to fish. But I had declined before, so he was left with bartering.

“Heading to the sea?” He offered me a cigarette.

The bent tailgate slammed shut, my middle-aged body ached. I brushed my hands on my lucky blue T-Shirt, lit the smoke, and rested my foot on the crooked bumper. “Yep.” I exhaled smoke through my nostrils.

Billy turned and I remembered why his friends called him Flounder: He was thin, ghost white, and didn’t have any padding on his ass. He looked like drywall to me.

“Say, I was planning to go too. How’s about we ride together? I’ll pay my fair share.” His shrugged shoulders didn’t sway me.

Billy was longwinded, and his nonstop tales were absurd and maddening. My preference was to go alone, but I was cash strapped and he knew it. So I bluffed. “Probably go solo. ‘sides, me and Juan’ll have the panga to ourselves.”

He rubbed his bald forehead and sighed, “What if I pay for all the gas, and the booze?”

I felt bad for resorting to this, but he was unbearable, especially with three days of his loose tongue. “Suppose that’ll help.” Then I realized his eyes made him appear ten years younger than me and I felt better about taking his money.

He grabbed the gear from his car. “This is going to be the greatest trip ever!” We’re going to catch hundreds of tuna, probably more, tons more! And the women, we’ll probably screw five, no, twenty of ’em…”

At that moment I realized I’d made a deal with the Devil’s mouth. The happy bastard would yap nonsensically the entire time, which reminded me to keep a bottle of tequila close by, for medicinal purposes.

Andrew M. Carless recently completed his first book, Run to Nowhere: Fact…Fiction…Farcical…, a 140,000 word collection of short stories spanning a variety of subgenres. Furthermore, while on an eight month sabbatical, Carless wrote five novellas, all of which are planned to be turned into novels, twenty additional short stories, and is quickly approaching the completion of an untitled fast-paced thriller. In all, he compiled roughly 800,000 words while dodging the responsibility of working a full-time day job, which he loathes.

Carless often brings a distinctively bent/humorous approach to his writing style, because he believes “readers need to be challenged and, at times, left feeling uncomfortable.”
Andrew M. Carless may be reached at bear.flag@yahoo.com