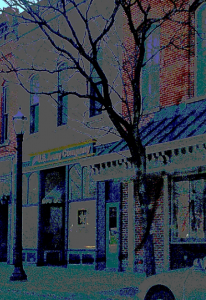 There is a man who works in my office; he has a wooden leg.

It is not an ultra-realistic, scientifically designed and fully-articulated prosthetic. He has a one-and-a-half foot stump below his knee. A polished oak coffee-table leg stands surreptitious beneath his blood-red pantaloons, sparse and thin next to the high black boot and strong bearing of his remaining limb.

I come in early most days and hide behind my cubicle wall just to see him as he enters the floor.

At 6:00 A.M. I hear his card key as it buzzes through the door, awakening the sleeping electronic guardsmen that keep us safe from the outside world. Six on the dot, he is never early and he has never been late. Punctuality is a rare quirk in a man who sails by the tempers of the Seven Seas. He never disappoints.

His galleon appears, quiet and grim, skirting the desks and floating cubicle insta-walls. His ship knifes through the waters of still-empty halls, carrying with it a pea soup fog, and the faint odour of tuna fish and shrimp about to turn. The vessel slows fast and comes to rest directly across from the small kitchenette, with its gleaming steel sink and towering coffee dispenser. The anchor falls, and he wades ashore, a cold-gleaming cutlass in one gloved hand, a thermal mug in the other. He stalks with slow grace and a head held high in rebellious pride. With his tankard filled and his eyes brimming with thoughts of bosomy wenches and bountiful golden booty, he shambles back aboard and sails on, standing tall at the bow, strong and sure, fine velvet coat flapping away from the satin of his waistcoat. The wooden whale drifts slowly past the fax room and the copier, and turns left to disappear around a corner. His dark flag, its snarling skull and ominous cutlass, curls in the soft ocean breeze and disappears, swallowed up in the pre-dawn mist as a buoy tolls lonely amid the waves.

By 6:30 the fog has melted away, seeping out through cracks in the outer walls, and the carpets are dry and salt-free. As the first of our coworkers arrive, I emerge from my hiding place and see him – the Office Pirate – limping ever-so-slightly as he joins the morning banter by the laser printer. Adjusting the lapels of his charcoal grey suit and straightening his Brooks Brothers tie. He nods, like an old compatriot, to the old man pushing the breakfast trolley as he chuckles beneath his breath – breath still syrup-sweet with rum and dripping from sharpened teeth – and no one raises an eyebrow when he pays for his bagel with a tarnished gold doubloon.