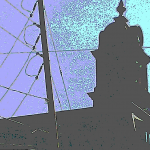 She felt a little drunk from the constant motion of sleeping in the car, but when he asked her to drive she slapped her cheeks and adjusted the rearview mirror. Sunlight glinted off the RV at the next pump back. She crossed herself, twisted the key, and merged onto the highway. He reclined his seat then rose on his elbows to watch the truck stop sink into the prairie. “You know what’s wrong with this country?” he said.

“Tell me,” she said. Drizzle became rain. She flicked the wipers on high.

“Not enough churches.” He pulled his wool cap over his face.

“I thought you were an atheist,” she said. “Presumably you disagree with everyone who goes to church, and on fairly significant grounds, right?”

He nudged the cap from his mouth. “Correct.”

The road began to slope. She passed a Coke truck and a Mayflower moving van.

He removed the cap and used it as a pillow. “I don’t. I want more bells. In Italy, you can’t go five minutes without hearing at least one bell. Or ten. Or twenty.”

The car dipped into a ravine. Antelope ate grass by the gravel shoulder. Rain flowed into grooves along the road and spilled into gullies. Not far off, she imagined, a stream washed through a gulch and eroded a snake fossil embedded a million years before the first bell ever rang. She switched on the radio, and the speakers hissed like wind through a broken whistle.

“In Seattle,” he said, “no bells, just hippy wind chimes.”

They crested a hill. Mountain peaks bent northward in the distance. “Ladies and gentlemen,” she said, “I give you the Rockies—weighing in at two hundred million years old, the youngest mountain range in the hemisphere.”

He sat up to see over the dashboard. “I mean, how many wind chimes does it take to match the decibels of the smallest church bell in the smallest village in Europe? Fifty? Five hundred? And think of all those people kneeling and bowing their heads.”

“I don’t believe what they believe. I don’t even want to believe it, but I feel its absence.”

After a while, he fell asleep. She put a hand on his leg and whispered a prayer for a good Italian restaurant within sight of the next gas stop. Then she apologized for this and took it back. Too specific, and too selfish. Every now and then, a moan spooled through the thrum of the engine. Eventually, the clouds parted.

Eric Bosse’s work has been published byThe Sun, Mississippi Review, Zoetrope, Exquisite Corpse, The Collagist, Wigleaf, Night Train,and several other journals. He lives in Oklahoma with his wife and children, and teaches at the University of Oklahoma. His short story collection,Magnificent Mistakes,will be published by Ravenna Press in 2011. He blogs atEverything is Beautiful, and Nothing Hurts.